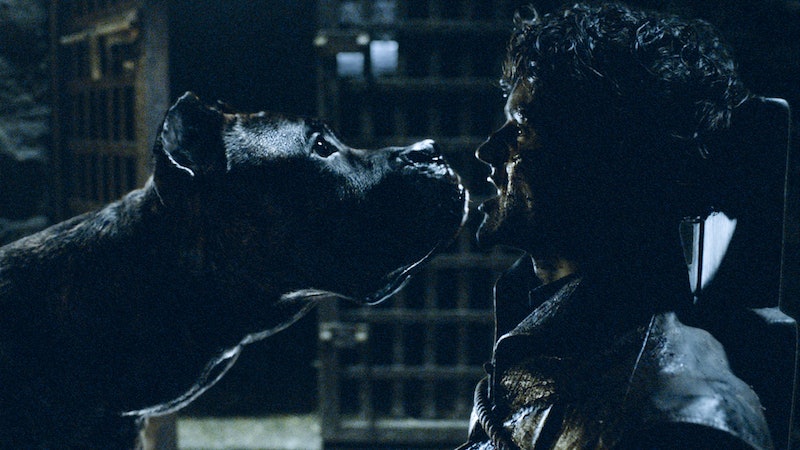 It was a great day in the world of television when the despicable and truly reprehensible Ramsay Bolton died on Game of Thrones after being ripped apart by his starving dogs. It was a gruesome end for an equally gruesome character, however, he still managed to deliver one last blow to his wife before taking his final breath... and leaving us to wonder what the heck it all means. I'm referring, of course, to Ramsay's last words to Sansa on Game of Thrones , where he snidely told her, "I'm part of you now," which has made many fans question whether or not Sansa Stark could be pregnant with his evil spawn. And while that may very well end up to be true (we'll know for sure in Season 7), that's not the only way this final line can be interpreted.

For starters, there's no way Ramsay would know if Sansa was really with child. They've been away from each other for a while now and it's not like she'd ever confide something like that to him. So even if that's what he did mean, it would be a shot in the dark guess at best. Just one final attempt at getting into her head. (If Ramsay loved one thing in this world, it was playing mind games.) That means it's important to take anything he ever says with a grain of salt.

Then there are the actual words themselves to consider. Saying that he's part of her now could just mean that she'll never be able to shake away the memories of the horrible things he did to her during their marriage. It doesn't matter if it has been 10 days or 10 years, Ramsay figures his beloved will continuous relive the torture and rape he inflicted upon her throughout the rest of her days, meaning that even if he is gone, part of him will still live on in her mind. However, Sansa has proven to be much more strong and resilient than he ever gave her credit for, so she's not going to let him dominate her thoughts in such a way. But that doesn't mean that part of what he's saying isn't true.

Like Sansa revealed to Littlefinger upon their initial reunion, "I can still feel it. I don't mean in my tender heart — it still pains me so — I can still feel what he did in my body, standing here right now." Sure, this could be another hint about her potential pregnancy. OR it could be reinforcing Ramsay's words about her never truly being rid of him from a psychological standpoint.

Even the actor who plays Ramsay, Iwan Rheon, recently told Bustle how he himself didn't believe the line was meant to imply anything about Sansa being pregnant. "I think what Ramsay's saying is, 'You'll never be able to shake me off. No matter if I die, I'm always gonna be a part of you, because of what I've done to you,'" Rheon explains. So if his interpretations are accurate, then odds are there won't (hopefully) be a little baby Bolton to contend with next season. I mean, sure, the actors have lied about their characters' intentions in the past (looking at you, Kit Harrington!), but that doesn't necessarily mean they'll lie to us every time... right?!?!