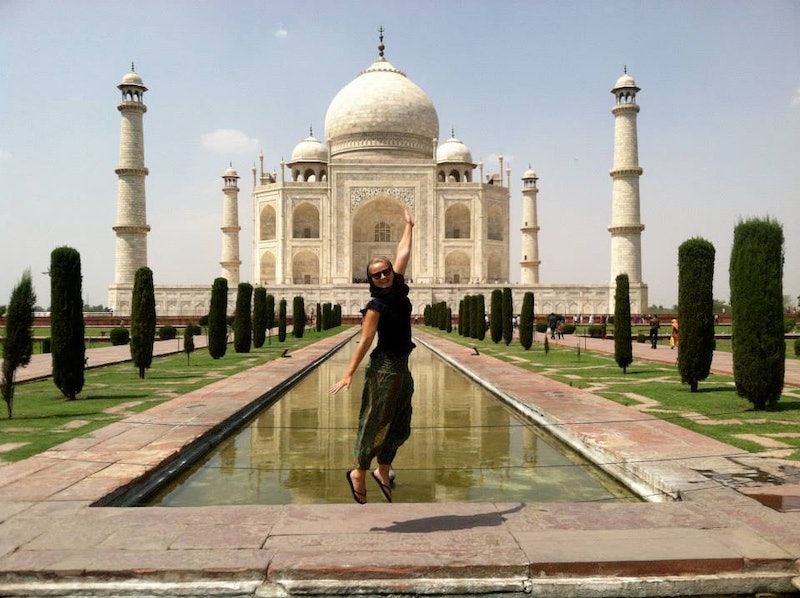 My story is one you’ve probably heard before: I quit my job to travel the world and write. If you’re an idealist, this probably sounds thrilling, but for a Type A pragmatist like me, the transition was terrifying. Like so many others in their late twenties and early thirties, I found myself stuck in the grey area that comes between college and adulthood. Do I start popping out babies and buy a house ... or go home and eat a jar of Nutella? Travel seemed like a great way to get away from it all. I imagined that being away from the security of home, the stability of routine, and the distraction of family and friends would help me find my path.

But instead of travel unveiling what I should be doing with my life, it exposed the complicated mess that is me. After the newness of living in another country wore off and I checked all the to-dos off my tourist checklist, I was faced with time. Time to think. Time to question who I am and why I do the things I do. I didn’t have a 9-to-5 job to divert my attention, a steady routine to keep me secure, or friends to entertain me. Add in the vulnerability that comes along with travel, and you’ve got some next-level soul-searching.

These eight realizations are only a few of the many things— both good and bad — that I’ve learned about myself over the past year.

1. I Don’t Know The First Thing About Living In The Present

Let’s just get one thing straight: contrary to what my current lifestyle may imply, I’m not a free spirit. I’m a planner. I like making lists and concocting five-year plans (I know, I suck). It goes without saying that this type of personality does not pair well with a life of constant travel. For example, as I write this, we have no idea where we’ll be six days from today. Seriously.

When a transition draws near, I wake up early and lay in bed, mapping out possibilities. I look up flights on Kayak and apartments on Airbnb. I spend valuable days not enjoying the here and now, but stuck in a daydream (or nightmare) over what the future will hold. Today, I’m in quintessential café in Paris, but my mind is on the day of our departure. How many days like this have I missed because I was stuck in the future? I’m just learning how to release my sweaty grip on life, but as my computer’s search history can confirm, I’m nowhere near where I should be.

This is one life lesson I owe to the Japanese. A good chunk of my physical insecurities stem from feeling inferior when I compare myself to other women. I hate feeling like I have to suck in my stomach at the beach. Even worse are the sideways glances and silent judgment that we women snidely give each other.

Japan was different. An old Japanese tradition that has remained in certain villages is the custom of bathing in public baths called onsens or sentos. Since I was living in a van, these public baths became as necessary to my daily life as convenience store bathrooms (I know, gross). At first, I cringed as I stripped down, squatted, and proceeded to scrub down in a tiny, well-lit room packed with other naked women. I was sure everyone was evaluating me.

But the more I visited the onsens, the more I stopped cowering in the corner of the room and started watching the women around me. They weren’t posing or sneaking glances at each other. Instead, they caught up on gossip while scrubbing each others' backs and pouring buckets of soapy water between their legs. It was shocking — and I was hooked.

An evening onsen became my favorite time of the day. I felt part of a community. Never before have I felt so comfortable and at peace with a group of women. Never have I felt so accepting of my physical body. It wasn’t until I left Japan that I discovered that this feeling had a name. The Japanese call it, “hadaka no tsukiai” which translates to “naked communion” or “naked friendship.”

3. I Spend Way Too Much Time Feeling Guilty

Even though I have to work to pay for the life I’m living, I spend a good chunk of time feeling guilty. I feel lucky — too lucky to be doing what I’m doing. Travel is a luxury that many people don’t indulge in. Sometimes the guilt runs so high that I play down my experience to friends or purposely drop off social media to try to hide what I consider to be a charmed life.

Here’s what I’ve realized: People don’t care. Everyone’s too consumed with their own life to worry about mine. While other people are buying cars and boats or posting photos of their baby, I’m spending my money on plane tickets to Bangkok and posting photos of a beach in Bali. And that's OK.

4. I’d Rather Live In A Van Than A Villa

Yes, I’ve done both and no, I’m not insane. When my husband suggested we live in a van while traveling across Japan — in the middle of winter — I almost lost it. Turns out, he was right. The month we spent living in a van was hands down the best month of my life (and I’m totally serious).

I loved how organized we had to be. I loved making tea and snuggling into my sleeping bag as a snow fell outside, and how our “home” traveled with us. Then there were the bigger perks: when you live in a tiny van with another human being, fighting is difficult. Sure, you can slam the van door shut and stomp around in the snow, but it’s not long before the cold surpasses your pride and you have to deal with it. We adapted to our lack of space by fighting less and making up quicker. We were gentler with each other and with ourselves.

5. Female Friendships Are Not Optional

I love my husband. He’s interesting, kind, and fun — but he’s got limitations. For starters, he thinks all dresses look the same, doesn’t know sh*t about lipstick, and unfortunately isn’t too hyped on the idea of listening to me bitch about our relationship. This is why a girl needs friends.

I’ve always had close friends, and while I knew that constantly traveling wouldn’t lend itself to building friendships, I didn’t realize how impactful the lack of female support would be on my life. I’m starved for female attention. I miss the kinship that comes from sitting next to your best girlfriend with a cocktail and some gossip.

6. I Don’t Actually Need A Lot Of Money Or Clothing

I was raised to be thrifty, so staying within my budget has been felt more like a game than a limitation. What I’ve realized is that even when I’m living in expensive countries, I don’t need a lot of money. Rent and plane tickets are unavoidable, but when it comes to activities and eating, I can get ridiculously cheap. I refuse to pay 17 euros to get to the top of the Eiffel Tower; I’d rather eat my brie and baguette in the grass below it for free. Instead of going out to eat every night, I boil a bag of beans for the week and have mastered the art of cooking rice (don’t judge, it took some time). In Japan, we adapted to the cost of living by eating convenience store onigiri (rice balls), peanuts, and Fuji apples. Going out to eat meant splurging on an $8 bowl of ramen.

I’ve also learned that I can travel with next to nothing. Two pairs of jeans, plain T-shirts, nice shoes, flip flops, a versatile jacket, and a regular laundry day is about all it takes to look decent and smell fresh. About half of the clothes I left with I’ve either shipped home or ditched along the way.

7. I Can Adapt To Almost Anything

Over the past year I’ve transitioned from an ashram to India, to a villa in Indonesia, to a freezing van in Japan, to Tokyo, to third-world Cambodia, and finally, to Paris. Who knows what will come next, but here’s the thing: I’m not worried about my ability to adapt (and as you know by now, I love to worry).

Transition sucks, but human beings are awesome. We can adapt to anything we set our minds to. Your body can go from freezing cold to sticky hot without losing a beat. You can spend months eating rice and then wake up in the land of cheese and baguettes.

What surprised me the most is how quickly I can adapt to living conditions I initially considered to be rough. In Cambodia, the electricity was often out, the ants took over our kitchen, and the water that came out of the bathroom sink first thing in the morning was brown, but after a few days, it felt like home. So far, nothing I’ve come across has been too difficult to adapt to.

8. I Have Trouble Going Home, But It's Where I Want To Be

I grew up in a tiny town that I just so happen to love, but I’ve spent plenty of energy trying to prove to myself that I could go bigger and do better. While half of me wants to live down the street from my parents and swap clothes with my mom (she’s cool like that), the other half of me has determined that ending up in the place I grew up makes me a failure.

This home-complex I’ve developed has pushed me to move to New York City, the Caribbean, and now, this traveler’s lifestyle I’m wrapped up in. Only in the past month have I come to terms with the fact that after this adventure is over, there’s no place I’d rather be than home — and that’s OK.

More like this
Anguilla Is The Under-The-Radar Caribbean Destination You Need To Visit
By Rachel Lapidos
Are Sagittarius & Capricorn Compatible In A Relationship? Astrologers Weigh In
By Kristine Fellizar
Are Sagittarius & Sagittarius A Good Match? Astrologers Weigh In
By Kristine Fellizar
Hinge's New Feature Makes It Easier To Explore Non-Monogamy
By Lexi Inks
Get Even More From Bustle — Sign Up For The Newsletter