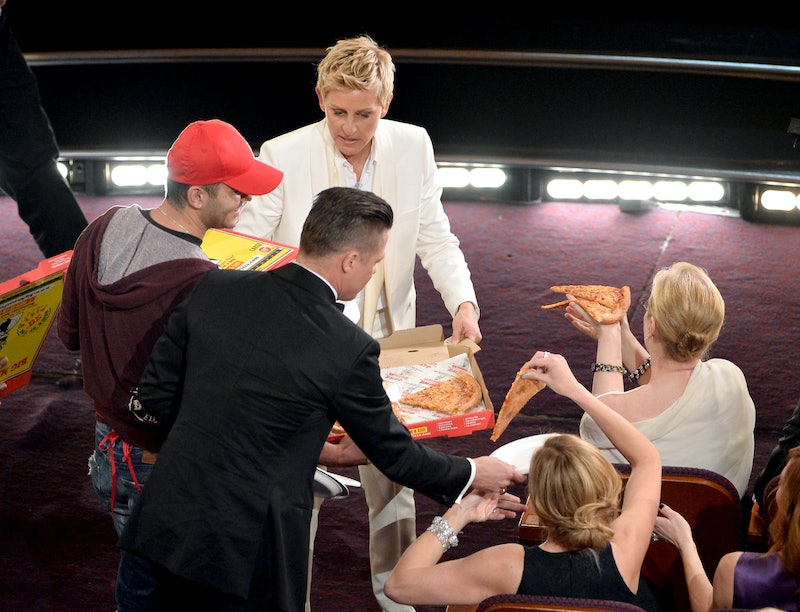 After all those weeks of speculation and predictions, the 2014 Oscars have come and gone, leaving just photos, soundbites and GIFs to hold us over until next year's awards season begins. Luckily, in the hours that have past since 12 Years A Slave's big win, the Internet has taken those things and turned them into hilarious memes that should keep us entertained for at least a few more hours.

From the night's most memorable moments, like John Travolta's crazy mispronunciation of Idina Menzel and that epic selfie, to smaller ones you might not have even noticed, like Leonardo DiCaprio's refusal of pizza and every single thing Benedict Cumberbatch did, each instant of the Oscars has been scrutinized—for comedic purposes, of course.

Memes have become an important part of awards shows, because after watching celebrities congratulate each other for over three and a half hours, you really just need to laugh at them for a while. As great as Ellen's monologue was, it wasn't quite enough to balance out the speeches that went on far too long and seemingly endless applause for every winner, speech and bit.

Here are the best Oscars memes the Internet could come up with.

This celebrity-filled selfie essentially became a meme on its own, since it kind of broke Twitter, but that doesn't mean it can't be parodied. There's the Harold Ramis-inspired photobomb.

And of course, a glaring omission is fixed.

Ellen ordering pizza was a cute recurring bit that really inspired a lot of people online. First, everyone became obsessed with this shot of Brad Pitt digging into his slice.

So naturally they had to photoshop into New York City.

And eventually pizza itself had to comment, using its personal Tumblr account, of course, with a comment that even got a response from The Fault In Our Stars author/Tumblr's favorite celebrity John Green.

Travolta's complete butchering of "Idina Menzel" was really upsetting for fans, so in return, they will mock him until the end of the time, starting by reminding everyone of how he pronounced Les Miserables last year.

Then by having Hermione remind everyone how to really say it.

Apparently Elphaba wasn't too happy about it.

And even President Obama was taken aback.

At least "Let It Go" and Frozen both won their categories.

Wherever Benedict Cumberbatch goes, Tumblr follows. This photobomb was just one of the things that have inspired countless posts chronicling his time at the Oscars. There's infinite Cumberbatch.

And there he is in the last supper.

And a lucky fan's book.

And escaping from a burning building.

Someone also noticed how Cumberbatch looked like he was just barely keeping it together while presenting an award.

Finally, someone realized who the Oscar statue has been based on this whole time.

Many people believed that 2014 would finally be Leonardo DiCaprio's year, that his fourth nomination for The Wolf of Wall Street would finally bring him that Oscar. They were wrong and upset, so they responded the way anyone would, with memes. First they analyzed his facial expression after Matthew McConaughey's name was called.

Then they let him wallow in his loss.

And then McConaughey really rubbed it in.

So Leo got angry.

Then Kanye West got angry.

Then The Parent Trap got involved.

Even Frozen was represented.

And of course, no meme collection could be complete without some Mean Girls. Turns out Leo and Gretchen Weiners have a lot in common.