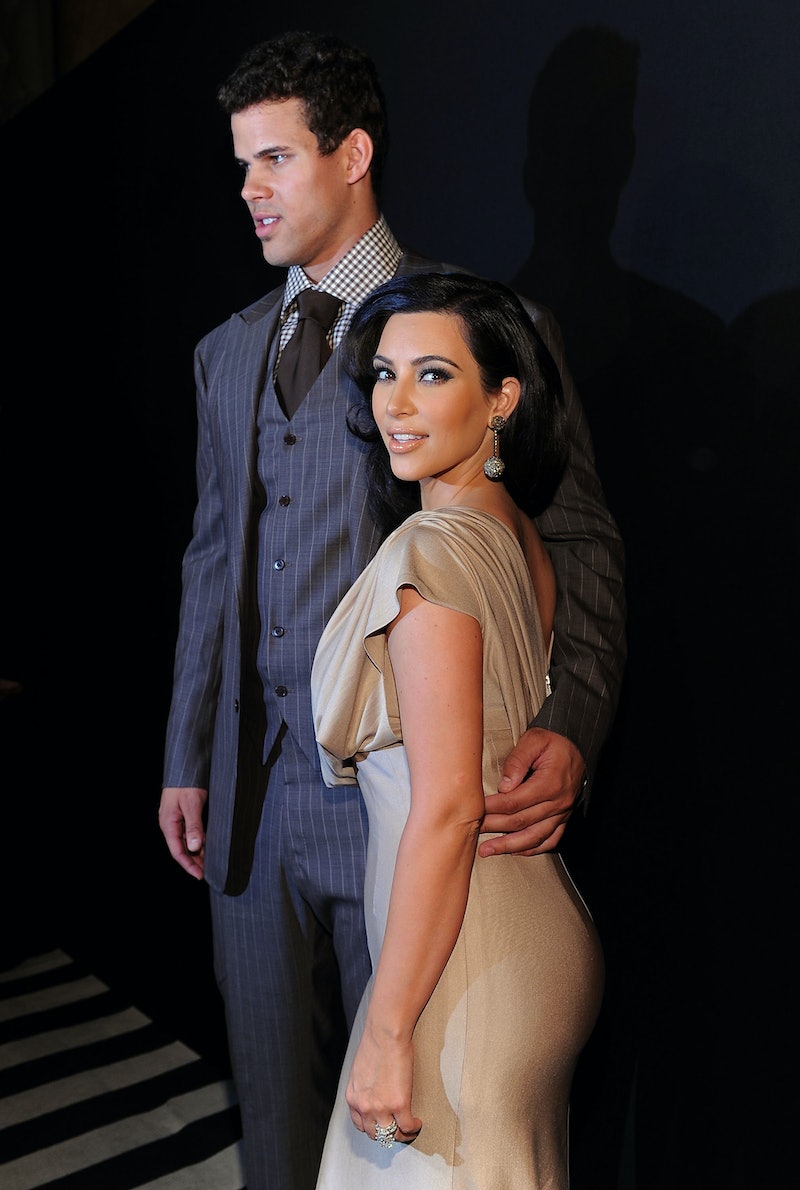 We all tune in weekly to watch The Bachelorette where contestants are urged to get engaged in two months in front of a nationwide audience. These engagements don't often result in a lasting marriage, but those involved always seem to think the process works at first. Like the contestants on the show, some of Hollywood's biggest stars have gotten married far too soon including Kim Kardashian, Britney Spears, and Kaley Cuoco. Their relationships weren't meant for entertainment like those on The Bachelorette, but the drama never fails to come through in true Hollywood fashion.

In Hollywood, "'Til death do us part" is muttered so often on the silver screen, it's perhaps not so surprising that it would be said all the time off-camera, as well. In Vegas things can get blurry when the lust and booze sets in, and there are opportunities to get fake Elvis to officiate your ceremony. And while these speedy celebrity unions will always make news headlines, their fast divorces are what really take the wedding cake.

Some of the following celebs got married after only one night, others waited a few months, but they all rushed to the altar very quickly. Some of the marriages lasted less than three days, others only a few years. Ahead, 13 celebrity couples that jumped the gun when walking — or sprinting — down the isle.

According to an MTV timeline, Kris Humphries and Kim Kardashian began dating when she sat court side at his game Halloween of 2010. After getting engaged in May 2011, they got married on August 20, a quick three months later. Kardashian's marriage to Kris with a "K" only lasted 72 days. Three years later she married her current husband Kanye with a "K."

Basketball player Lamar Odom and reality star Khloé Kardashian met in August 2009 at a Lakers party. They got married that September only a few weeks after their first encounter. After countless dramatic headlines and rumors, they are no longer together, though their divorce isn't yet official.

According to People, Nick Lachey and Jessica Simpson met at a Teen People party in 1999. They started dating and briefly broke up in April 2001. Less than a year later, Lachey proposed the following February, and they walked down the aisle that October. The two starred in MTV's Newlyweds where people tuned in weekly for a glimpse into the lives' of the happy couple. Their marriage crumbled three years later.

Jason Alexander was Britney Spears' childhood friend. ABC News reported that Alexander and Spears got married in 2004 and split just 55 hours later. They rushed to a chapel in Vegas after spending one night together on New Year's.

According to Billboard, Baywatch star Pamela Anderson and Mötley Crüe founder Tommy Lee married in Cancun in February 1995 after dating for only four days. Their bikini and Bermuda short marriage lasted for three short years. The rockstar and Playboy playmate had an infamous honeymoon sex tape and two kids from their rockin' wedding.

According to Us Weekly, Cris Judd and Jennifer Lopez met in 2001 during the filming of her "Love Don't Cost a Thing" music video. The two were engaged for a month when Judd married the singer in September 2001. The couple divorced just nine months later citing "irreconcilable differences."

Drew Barrymore started dating comedian Tom Green in 2000. People wrote that they tried to get married on Saturday Night Live, but that surprisingly never happened. Instead, they eloped a year later to the South Pacific. The marriage lasted only a year and the couple has made it clear they are no longer in contact.

According to Us Weekly, Dennis Rodman and Carmen Electra met after her mother died in 1998. Later that year, they had an impromptu wedding in Vegas, according to the Huffington Post. Nine days later, they filed for an annulment and six months later they were divorced.

You should know that country singer Kenny Chesney and Bridget Jones's Diary actor Renée Zellweger were a couple for a short but sweet moment in the past. Fans' jaws dropped when, according to Us Weekly, they tied the knot after only four months of dating. In 2005, the duo said their vows shoeless in St. John's. They later annulled the wedding.

According to E! Online, Nick Cannon and Mariah Carey secretly got married in the Bahamas April 2008 only six weeks after they started dating. Cannon filed for divorce from Carey in December 2015. Carey is now engaged to Australian billionaire businessman James Packer.

Tennis player Ryan Sweeting and Big Bang Theory star Kaley Cuoco met in August of 2013 on a blind date. They moved in together the next day and got married three months later in December 2013. Cuoco told E! News, "It all did move quite fast on paper, but we really did know." Cuoco confirmed their divorce to Entertainment Tonight in September 2016.

The Sonny and Cher Comedy Hour wouldn't have been complete without Sonny Bono and Cher's matching '60s bangs. According to Entertainment Weekly, Cher married Gregg Allman in 1975. She hopped on a plane to Vegas only three days after her divorce from Bono was finalized. Maybe if the plane to Vegas was a little longer she wouldn't have filed for divorce from Allman nine days later.

Anderson made room for her second spot on this list when, according to Time, she dated Kid Rock from 2001 to 2003 and things didn't work out. In July 2006, they got back together for only a few weeks before they got married on a yacht. She wore a classic white bikini — for the second time — and he wore a T-shirt. They later raced each other to the court to file for divorce. Kid Rock beat Anderson by 53 minutes.

Even though these relationships didn't work out, this does prove that Vegas really is a hot spot for celeb weddings.