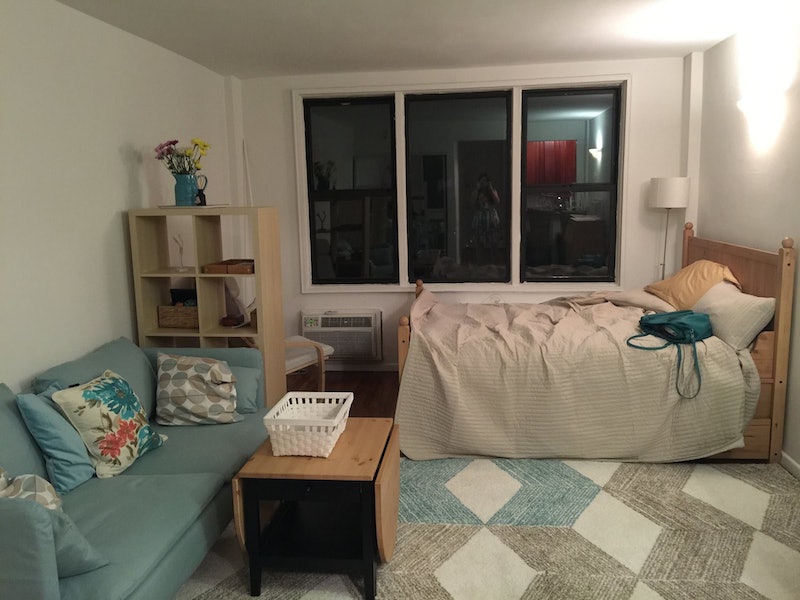 I don't exactly have an apartment that welcomes romance through the door. In fact, to call it an apartment feels like a misnomer. What I have is more like a box crammed into the fourth floor of a Kips Bay apartment building in Manhattan. If you were going to mail it, you'd have to tape it about eight times around to keep all the junk I accumulate from rattling against the walls.

As you open the door, which still has an ad for someone's cat-sitting service stuck to it, you'll see a bathroom to your left with an empty toilet paper roll hanging on the wall and the one I actually use above the toilet. Then, after stumbling over some running sneakers, you'll find a coffee table with a package of drinks labeled "NEVER HUNGOVER" and a sex toy charger I didn't care enough to put away. Whenever the possibility comes up that a love interest might grace the hallowed halls of my studio, I pray to the merciful sex gods that they'll suggest their own damn place.

So, when feng shui expert Carol Olmstead offered to give me a Skype consultation focused on bringing love into my home and my life, I felt very, very sorry for her. (That picture you see above was taken, like, two days after I moved in. The one below is more accurate. OK, I cleaned up for that one too.)

Olmstead's "Better First Impressions Feng Shui" consultations are part of a free service offered through the (also free) app Handy. Research by Handy and Berkeley psychologist Dr. Lindsay T. Graham has found that our homes have a huge impact on our ability to form and keep relationships. Fifteen percent of survey respondents said they'd dumped someone due to the appearance of their living spaces. Ouch.

Olmstead tells me that part of feng shui involves these same things a prospective partner might notice themselves, like photos of an ex or general disorganization. Some of it, though, is more symbolic. There are nine sections of a home, she explains, like "work," "wealth," and "love," and each should contain something that symbolizes what you want in that area. There are also a number of basic feng shui rules; for example, you should face the door because facing away from it leaves you vulnerable.

As I gave Olmstead a virtual tour of my apartment, her first question was, "Do you plan to stay here for a while?" She already knew what my answer was: "No." My apartment, she said, gave off the impression of someone transient: no art on the walls, not much decoration, and no designated spots for a lot of my stuff. The reality is, I plan on leaving in two months to adopt a digital nomad lifestyle and travel the world, and I've been wanting to do this for quite some time. Accordingly, she said, my place give off the impression that I'm not looking for a relationship — just a bit of fun for the time being — and I attract people who want the same thing.

In my case, beckoning a relationship into my home may not even be an appropriate goal. But if it were, I'd be doing a terrible job. Besides generally leaving it a hot mess, here are some things I've done to my poor apartment that you should never, ever do if you want to attract love.

1. My Ex's Sweatshirt On My Couch

I'll admit it: I still love to wear my ex's sweatshirt. I love how huge and comfy it is and how I can wear it with leggings because it fits me like a dress. When I'm having a bad body image day and just want to hide behind something, it always works... which is probably why I tend to leave it out on my couch or draped over a chair.

According to Olmstead, this is a huge turnoff. When someone sees something that's clearly related to an ex, like a photo, they get the message that you're not over them. And even when it's something not visibly related, like sheets you once both slept under, you're still leaving thoughts of that relationship around your apartment, which prevents a new one from entering.

2. An Unmade Bed With An Unreasonable Number Of Pillows

Who needs this many pillows? I do not know. I somehow accumulate pillows, and then I think "the more, the merrier," but that philosophy would be wrong, wrong, wrong. The most you should ever have at a time is two pillows, says Olmstead, or else you're not leaving room for a person to come in. An unmade bed has the same effect, she says. It's not exactly the kind of bed you want to throw someone onto and ravish them in. There's something about pulling back the sheets and letting someone in that's romantic, and you definition do not get that with the way my blankets are bunched up. The fact that I do almost all my work from my bed is also terrible feng-shui-wise because I'm not leaving that area available for romance.

3. All These Childhood Memorabilia

It's OK to express your inner child in your apartment, especially in your creativity section, Olmstead says. But between my Winnie the Pooh stocking left over from Christmas and my stuffed lamb, I've gone a bit overboard. Stuffed animals are especially bad to put on the bed for the same reason pillows are. And by decorating with a bunch of childhood relics, you're essentially turning your apartment into Neverland — not exactly conveying that you're relationship material.

4. Shoes By The Doorway

"People tend to keep shoes at front door, which represents walking away from love," Olmstead says. Guilty as charged. I hate putting my shoes away when I'm just going to put them back on again. But if I want to draw love into my home, not out the door, I should be keeping those sneakers inside the closet I normally throw them next to, she says.

5. A Bathroom By The Door — And A Mirror Duplicating It

"Bathrooms are associated with waste," Olmstead explains. So, when you have a mirror by a door, "it's harder to attract positive things: wealth, good relationships." Then, when you've got a mirror creating the image of yet another bathroom, it's a double-whammy. "You are what you see," Omstead likes to say. So, when you're seeing a roll of toilet paper and a plunger every time you enter or exit your home, you risk becoming a bit full of sh*t. (Not her words precisely, but that's what I'm gathering from her spiel.)

Any potential lover who enters my apartment has no idea who I am, says Olmstead. I don't have art on the walls or anything else expressing my personality. Instead of epically failing at feng shui like me, Olmstead recommends putting up art that represents what you want in each section of your apartment. In your bedroom, for example, find something that represents love to you. It can be hearts, it can be a couple, it can be anything — except Georgia O'Keefe, she jokes. "There's nothing more single, solitary, alone, and female than Georgia O'Keefe."

Overall, Olmstead says, the type of relationship my apartment is attracting is a short-term one. And ever since I moved in here last August, that is indeed all I've had. But, she mentioned, you usually can't blame the apartment alone for this. After all, the way I arranged my living space reflected my state of mind: itching for adventure and reluctant to settle down. If I were to change my mind and seek out a long-term relationship, I'd want to fix all these things. But now that I'm realizing I've had one foot out the door all along, I see I was subconsciously calling in the only type of relationship I had space for — literally.

Going forward, I told her, I don't know what message to send with my feng shui because I don't even know what I want. She said a lot of her clients have that same problem. The best remedy? Go pick up some art that catches your eye, and it might represent what you want without you even realizing it. Since I'll be traveling, she recommended I pack this piece of art with me so I can add it to any room I end up in, and it'll help me bring what I want into my life, whether that's a travel companion, someone to settle down with eventually, or just a series of overseas hookups with a bunch of hot guys from all around the world. (Now if you'll excuse me while I ponder how to artistically represent that last option.)

I'll be packing light, but I just might take her suggestion.