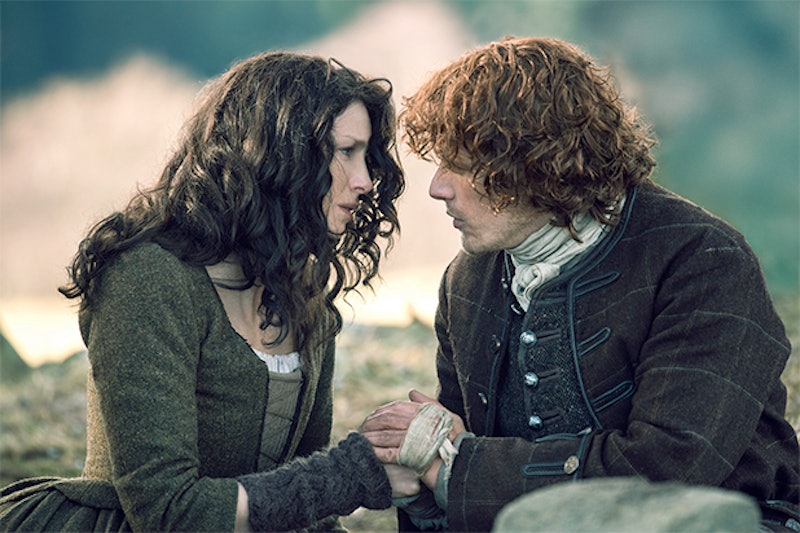 While it is true that Outlander Season 2 is coming to a close (*sobs*), fans can take comfort in knowing that Jamie and Claire Fraser's journey is still far from over. Now that Outlander has been picked up for a third and fourth season, the Starz series' future seems more secure than ever. But given that the show is based primarily on its novel counterpart created by author Diana Gabaldon, you may now find yourself wondering throughout this joyous news what book Outlander Season 3 will be based on when the series returns. Though no specific spoilers about the next season have been released (those details will be saved for after the Season 2 finale hits), we do know that Outlander Season 3 will center around the third book called Voyager .

Book readers will know much better than anyone specific plot points that will take place throughout that particular installment, however, thanks to a recent interview Bustle had with the show’s executive producer, Ronald D. Moore, these future seasons could end up straying a little further away from the book series than we have yet to see thus far, though, that certainly shouldn't deter you from the inevitable excitement and action that is still sure to come.

Naturally, Moore plans to be as faithful to the books as he can, but he also recognizes that the show is also allotted some creative freedom to play with as the seasons progress. "I think the longer that you go, the more the TV series inevitably veers from the book and certain plot lines then take on a life of their own. Certain characters change and you have to follow the way they change," Moore says to Bustle. "Those changes add up and the further in you go, the bigger those separations become."

In fact, you'll even start to see some of those more pronounced changes during the Season 2 finale, which Moore promises will introduce a new plot that not even the book readers will see coming. "Definitely in the finale, there’s a storyline that was not in the book, but it’s around one of the characters that’s in the book," he shares. "We expanded on that and broidered on that because it just seemed like it was a great opportunity, it was a lot of fun." Odds are this storyline will extend well into the third season, so it'll be exciting to see how it'll all fit together long-term.

Either way, though, get ready to veer away from Dragonfly in Amber and dive headfirst into Voyager. If you think things are interesting now, just wait until you see what the future has in store.