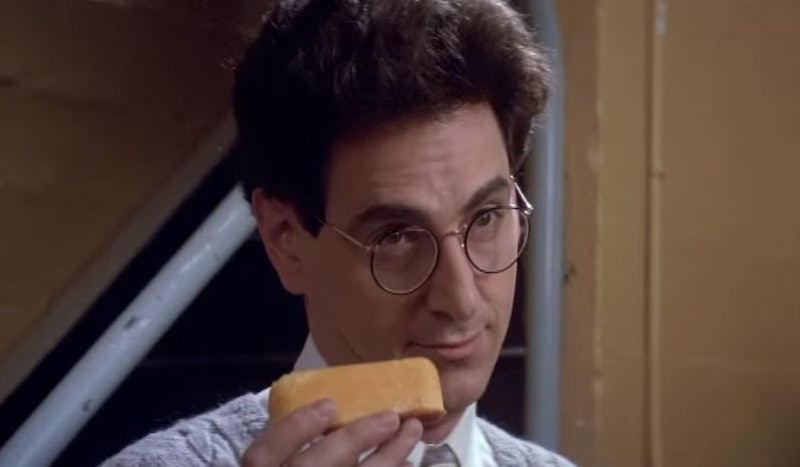 This year has been a pretty entertaining one for movies so far. Box office smashes like Captain America: Civil War, Zootopia, The Jungle Book, Deadpool, and Finding Dory have all drawn praise from critics and audiences alike, but there's still another major 2016 release that I'm looking forward to more than any of the others. I'm talking about the new Ghostbusters movie, which arrives in theaters on Juy 15. I'm excited to see the franchise return because the original is one of my favorite movies ever, and I can't think of a better way to prep for the reboot than by remembering the funniest quotes from the original Ghostbusters.

When I was a kid, I didn't even really think of Ghostbusters as a comedy. To me, it was an action movie about guys who went around hunting ghosts with lasers, which I found to be indescribably awesome. It wasn't until I started to get older that I realized the film wasn't just a comedy, but that it was one of the funniest movies ever made. Bill Murray, Dan Aykroyd, Harold Ramis, and Rick Moranis make up what is probably the greatest collection of comedic minds ever united for a single film, and the film's script, written by Ramis and Aykroyd, is full of clever and nuanced humor that flies completely in the face of the plot about guys hunting ghosts with lasers. The humor of Ghostbusters is whip smart, and I'm hoping the new movie does a good job of replicating the same type of comedy. But to tide fans over until the new movie premieres, here are the 19 funniest quotes from the original Ghostbusters.

The best part about this joke is that Venkman doesn't know why he should be concerned about a Twinkie (Egon uses one as an analogy to represent the staggering amount of psychokinetic energy that's been unleashed upon New York), but he is completely sincere when asking about it.

2. "You're gonna endanger our client — the nice lady, who paid us in advance before she became a dog."

Do ghosts really hate the sound of piano keys? Of course not, but Venkman is doing everything he can to look like he's a professional to try and impress Dana.

Winston reveals his salary, a decidedly paltry sum, when literally facing death in the showdown with Gozer.

While it appears on the surface to be nothing more than a simple R-rated joke, the joke is actually a clever piece of misdirection, since Venkman is alluding to Ray's insult of "Dickless" directed at Walter Peck, rather than answering the question he was just asked.

A ridiculously high number of electroshocks remain for Venkman's test subject, though Venkman casually says the amount as if it's no big deal.

7. "Of course you forget, Peter, I was present at an unexplained, undersea, mass sponge migration."

Ray's experience with paranormal phenomena is dubious at best at the beginning of the film.

8. "You’re right, no human being would stack books like this."

You can always count on Venkman for a good dose of sarcasm.

Venkman juxtaposes an unbelievably serious situation with a totally mundane one, but renders them equally panic-inducing.

11. "Many Shuvs and Zuuls knew what it was to be roasted in the depths of the Slor that day, I can tell you!"

The best part of this insanely specific and weird quote is the sincerity and enthusiasm with which Louis Tully delivers it.

12. "I’ve worked in the private sector — they expect results."

A subtle little jab from Ray at the sheltered careers of university employees.

Equal parts threat and justification for his weird line of questioning, this quote wouldn't work in any other situation.

14. "Janine, someone with your qualifications would have no trouble finding a top-flight job in either the food service or housekeeping industries."

Ouch. Venkman has mastered the art of passive aggressively insulting someone.

Venkman makes a benefit for himself sound like a challenge. This guy is good.

Dana Barrett gets some good lines too, commenting on Venkman's unprofessional behavior by first leading him to believe she's going to compliment him before cutting him down.

17. "Everybody, this is Ted and Annette Fleming! Ted has a small carpet cleaning business in receivership; Annette's drawing a salary from a deferred bonus from two years ago. They got 15 thousand left on the house at 8 percent, so they're OK! So does anybody wanna play Parcheesi?"

Louis, an accountant, invites clients instead of friends to his party so he can write it off as a business expense on his taxes, which is why guests receive super interesting intros like this.

18. "You’re not gonna lose the house, everybody has three mortgages these days."

It's quickly revealed that Ray does indeed have reason to worry about his house, since Venkman secured a whopping 19 percent interest rate that alone will add up to $95,000 in the first five years. Oops.

19. "Sorry Venkman, I'm terrified beyond the capacity for rational thought."

Count on Egon to stay in character even when he thinks he's about to die.

It will definitely be difficult for the new Ghostbusters movie to match the laughs of the original, but with talent like Kristen Wiig, Melissa McCarthy, and Kate McKinnon on board, I'm optimistic that they'll be up to the challenge.