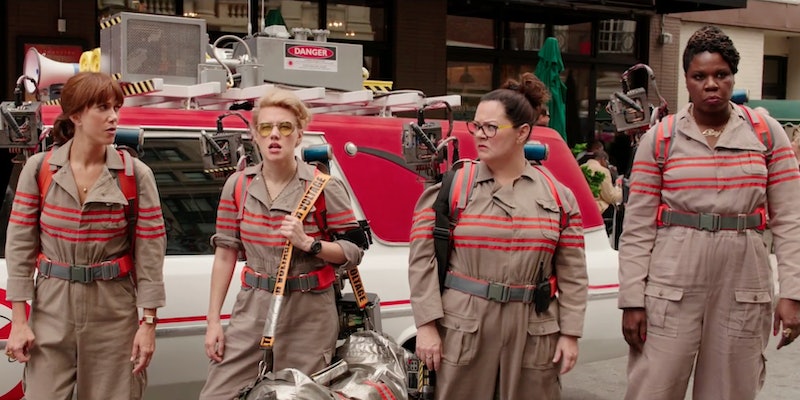 If you haven't heard, there's a certain movie reboot that's been fighting an uphill battle of negative attention and unwarranted critique since it was announced. (Ghostbusters. That movie is all the all-female remake of Ghostbusters.) But, here to set the record straight — and to hopefully cool off some of that hate — is an actor from the original film, Dan Aykroyd. You may know him as Ray Stantz — or better yet, Dr. Raymond Stantz — but that's not important. What's important is that someone who the Ghostbusters fandom respects and reveres has given his stamp of approval. Yeah, guys, Aykroyd likes the new Ghostbusters movie, so you can all relax now.

Paul Feig's reboot — starring Kristen Wiig, Melissa McCarthy, Leslie Jones, and Kate McKinnon — has been denounced (by some pretty melodramatic fans) for ruining everyone's childhood. Which, besides being ridiculous, honestly makes no sense at all. The original Ghostbusters still — and will always — exist, regardless of any good or bad movies that come before, during, or after it. Even though the disparaging remarks have laid a difficult road for the reboot, the biggest bummer is that the majority of these premature critiques seem to stem from the very real, very sad concern that a male-dominated story just can't be carried by women. Because, woman can't investigate the paranormal and be funny and make sandwiches all at the same time, right? (Right?!)

According to Ray Stantz, wrong. Aykroyd has a few things to say about the film — and none of them support this idea.

Aykroyd wrote on his WhoSay page: "As originator of the original: Saw test screening of new movie. Apart from brilliant, genuine performances from the cast both female and male, it has more laughs and more scares than the first 2 films plus Bill Murray is in it! As one of millions of man-fans and Ray Stantz, I’m paying to see that and bringing all my friends!” Hey, guys! A man-fan approves of the all-female cast? And not just any man-fan. An original ghostbustin', proton pack-wearin', man-fan? Well, if that's not enough for those totally not-sexist fans out there, then I don't know what else could possibly convince them besides, I don't know, hate-watching the movie when it comes out. (Which I'm sure they were going to do anyway.)

Apparently Aykroyd has a cameo in the Ghostbusters reboot, so his motives for speaking out on its behalf might be bias, sure, but to be blunt, I don't care. If Ray Stantz gives a seal of approval, it means something. (To be blunt again, I'm going to see the film anyway, so I'm speaking more for all the naysayers out there who still need convincing after those posters, character descriptions, and two amazing trailers.) And though we already knew Bill Murray would have a Ghostbusters cameo, here's another reminder. If Dr. Peter Venkman makes an appearance, you can rest assured that your childhood won't be ruined. Dr. Peter Venkman wouldn't do you wrong. He just wouldn't.

Whether or not Ray Stantz's quick review of the film will have any impact on how the film does both commercially and critically, we can't say for sure. But at this point, the outlook has never looked better. Ghostbusters will arrive in theaters on July 15.