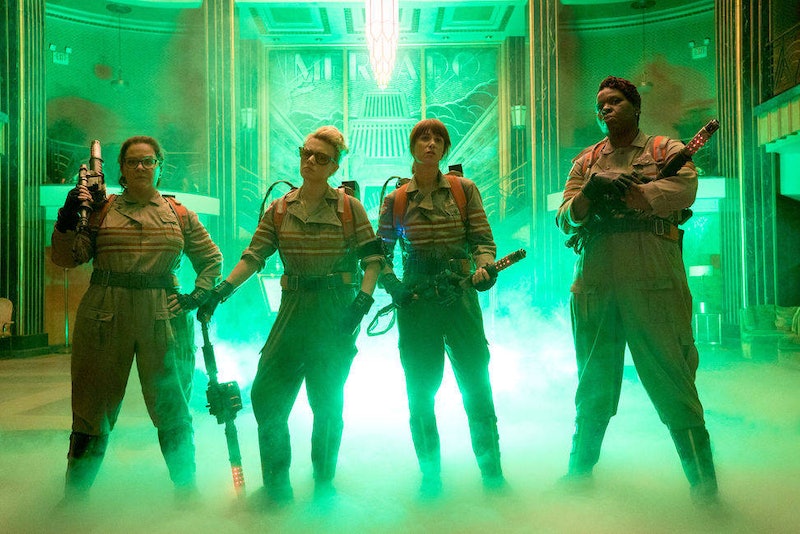 Let's face it: most Hollywood movies aren't really made with women in mind. Save for a few rom-coms here,or period dramas there, women audiences are mostly considered an afterthought. In turn, movies starring women and telling female-driven films are considered, as Cate Blanchett so eloquently put it in her 2014 Oscar speech, "niche experiences." There is a reason why Marvel still has not green-lit a Black Widow movie, despite having the resources and time to reboot Spider-Man for the third time in two decades. And that reason is because Hollywood embraces the irrational idea that movies starring women cannot be blockbusters as if it were fact. This is why Ghostbusters is the one 2016 movie every woman needs to see, because if we make the all-female Ghostbusters reboot a massive hit at the box office, well, then Hollywood is really going to have a lot of explaining to do the next time they want to keep women characters on the periphery.

A lot has been made of the sexist backlash the Ghostbusters reboot has received ever since it was first announced. Is it just a few upset fanboys desperately clinging to their nostalgia, or is the critique driven by actual hatred of women? Ivan Reitman, the director of the original film and a producer of the reboot, said in an interview with Mashable that the backlash was driven by the former. "I think there's way too much talk about gender [when it comes to this film]. I think that many of the people who were complaining were actually lovers of the [original movie], not haters of women," Reitman said.

Now, it might seem like Reitman's right, in a sense, because it's been said that a lot of the haters promising to boycott the female Ghostbusters reboot are hiding behind the defense of nostalgia. They're not sexist, they're just purists — right? Um, no. The Ghostbusters backlash is certainly motivated at least in part by sexism — people can't deal with the idea of women taking over a male franchise — and I'm sure many movie exec or Hollywood bigwigs share that view, unfortunately. They view female-led films as not profitable (despite plenty of evidence to the contrary. I mean, just see The Hunger Games) and because of this, rarely make them a reality. Yet while there's nothing we can say or do to convince the haters that a Ghostbusters reboot isn't the world's worst idea, there is something we can do about Hollywood — and that's see the freakin' movie.

To ensure that Hollywood makes more female-driven films, audiences have to be willing to spend money on a movie ticket, especially ones made by female directors or written by women. It's so important to support movies by women, about women, like the upcoming Mira Nair film, Queen of Katwe, starring Lupita Nyong'o. The new Ghostbusters reboot was co-written by Katie Dippold and director Paul Feig, so going to see the film is supporting not only an all-female cast, but a female screenwriter. Furthermore, Feig has made a career out of making female-driven comedies, so going to see another one of his endeavors can only mean good things for women in Hollywood going forward.

More like this
You Might Want To Rewatch 'Elvis' For This Britney Spears Easter Egg
By Grace Wehniainen
What Does The Presley Family Think Of 'Elvis'?
By Arya Roshanian
The 'Spiderhead' Movie Ending Is Nothing Like The Short Story It’s Based On
By Morgan Leigh Davies
9 Photos Of Margot Robbie & Ryan Gosling As Rollerblading Barbie & Ken
By Alyssa Lapid
Get Even More From Bustle — Sign Up For The Newsletter