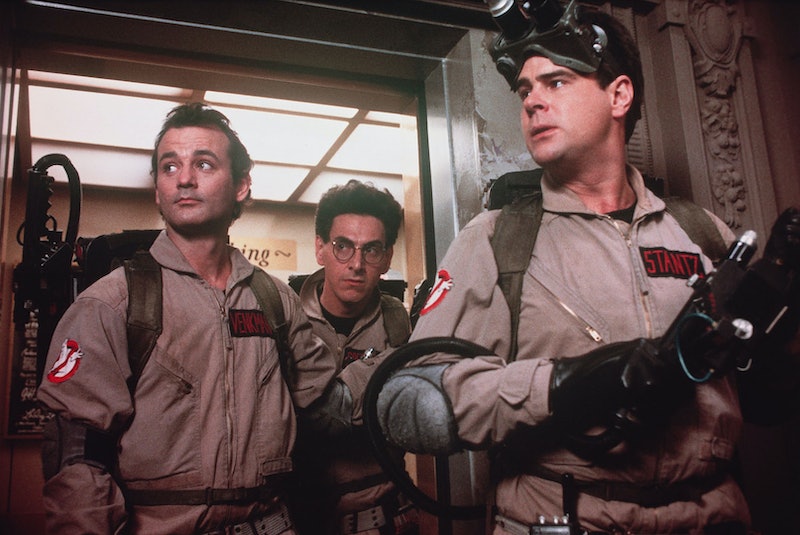 Dan Aykroyd has always spoken fondly about the possibility of returning to the Ghostbusters franchise he helped start. Aykroyd, who starred in the original series as Dr. Raymond Stantz, also co-wrote the original script with co-star Harold Ramis and produced the film. Given Aykroyd's strong ties to the original, fans were eager to see his position on the all-female reboot, and thankfully, it was one many could support. "The Aykroyd family is delighted by this inheritance of the Ghostbusters torch by these most magnificent women in comedy," Aykroyd told The Hollywood Reporter after the all-female reboot cast was announced. That supportive statement set off a series of rumors that the actor might be more involved in the reboot than he let on. But if Aykroyd is in the Ghostbusters reboot, what role will he play?

It shouldn't surprise you to hear that Aykroyd was the first member of the original cast confirmed to return for the reboot. As the most vocal supporter of the all-female Ghostbusters reboot, it's only natural that the star would agree to a role in the film. Aykroyd accidentally announced his cameo on Twitter in July 2015, tweeting, "On GB set shooting my scene with funny beautiful Kristen Wiig Lady GB's are adorable, hilarious and badass Exhilerating! #ghostbusters." He deleted the tweet soon after, but the damage was done.

Unfortunately, fans hoping to see Aykroyd rocking his old Ghostbuster uniform will likely be disappointed when they see the movie. As with all other returning cast members, Aykroyd will only appear in a cameo role completely different from his original role. Spoiler alert! The details surrounding Aykroyd's Ghostbusters cameo have not been confirmed by the stars themselves, but his cameo was included in a U.K. TV spot for the film and in a sizzle reel played during CinemaCon in April.

In the scene, Aykroyd reportedly appears as a cab driver (definitely not Ray Stantz) in a scene with Wiig's Erin Gilbert, in which he turns and tells her, "I ain't afraid of no ghosts." A clear callback to the original Ghostbusters, not to mention the beloved "Ghostbusters" theme by Ray Parker Jr.

It's unclear whether Aykroyd's fun cameo can be taken as a blueprint for all returning star cameos. Will Bill Murray pop up to say "Who you gonna call?" or "'Busting makes me feel good"? There's only so much cute nostalgia one movie can take, however, so it's likely that only a few have such obvious callbacks to the original Ghostbusters.

As for the movie itself, Aykroyd has given it an enthusiastic stamp of approval. In May, he took to Facebook to endorse the Ghostbusters reboot, boldly stating that "it has more laughs and more scares than the first two films." With reviews like that and a cameo from Aykroyd, how can Ghostbusters not be awesome?

More like this
A New Scooby-Doo Movie Confirmed Velma Is Gay & Twitter Is Pumped
By Radhika Menon
Twitter Is Unravelling Over Wolverine’s Return For 'Deadpool 3'
By Darshita Goyal
Everything You Need To Know About ‘Black Panther: Wakanda Forever’
By Bustle Editors
Alan Rickman's Diary Reveals Why He Considered Leaving 'Harry Potter'
By Darshita Goyal
Get Even More From Bustle — Sign Up For The Newsletter