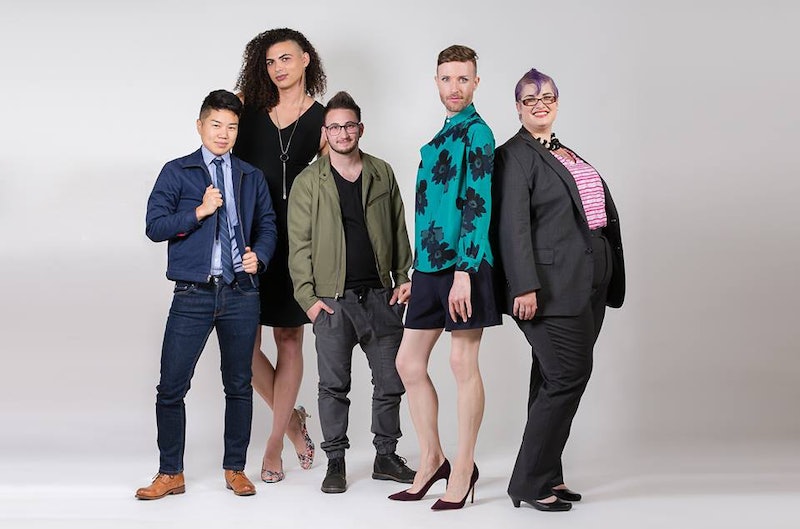 In a time when transgender and non-binary people are arguably more visible than ever, it only makes sense for brands to produce lines of ungendered clothing. But unfortunately, they don't always get things right. As lifestyle site Fusion critiqued of ungendered clothing lines from Zara and American Apparel, among others, unisex garments tend to look like "shapeless mess[es] of clothing garbage."

This might seem kind of harsh, but considering the monotony and simplicity of so many of these designs, as well as the choices that seem to define unisex as "women wearing men's clothing," you can likely understand some of the negative feedback. Unisex and androgynous clothing lines often seem to be made with thin, white bodies in mind and as a default of masculinity, both of which kind of erase the point of producing ungendered clothing in the first place. All this in mind, let me introduce you to Harridan Township.

The new clothing line is the brain child of Mary Going, founder and CEO of Saint Harridan, a masculine clothing company for women and feminine humans that offers customization options for anyone ordering. Since the popularity of the company has risen, Going decided to extend her brand to produce four more labels that will offer masculine clothing, feminine clothing, and everything in between, according to the Kickstarter page for Harridan Township.

Currently, the "online department store" is seeking funding, with its Kickstarter having raised over $58 thousand of its $250 thousand goal already, and 10 days left on the campaign.

Instead of producing more clothing under the Saint Harridan label, Going's plan is to produce five lines under the store name of Harridan Township. The labels will operate under names that aren't remotely meant to categorize their customers, but to hint at the clothing one may find there.

Joining the Saint Harridan label are Mr. Mary, Button Row, Love, Jeffrey, and Crow & King. Each line will have its own unique take on ungendered apparel, meaning that androgynous and non-binary people alike hopefully won't all have to try to find garments in one collection to suit their vast array of aesthetics and needs.

In fact, Harridan Township is going the extra mile to ensure the comfort of its shoppers: It promises ethical manufacturing, free returns up to a year after purchasing (when items remain unworn), and most excitingly, universal sizing.

This means that instead of customers having to work out their sizing for two gendered size charts, Harridan Township is instead issuing its own system that encompasses every gender and its needs. On top of this, Harridan Township will be offering customized pieces from every line in its online store.

These clothes, as presented and pitched in the Kickstarter appeal, are bright, alternative looks for anybody struggling to express themselves in stores that only offer men's and women's departments. Or, as the site's landing page put it, "We are not gender neutral. We are gender excited, gender experimental, gender queering."

Going filled a gap in the market that she observed and struggled with, and that's nothing short of inspiring.