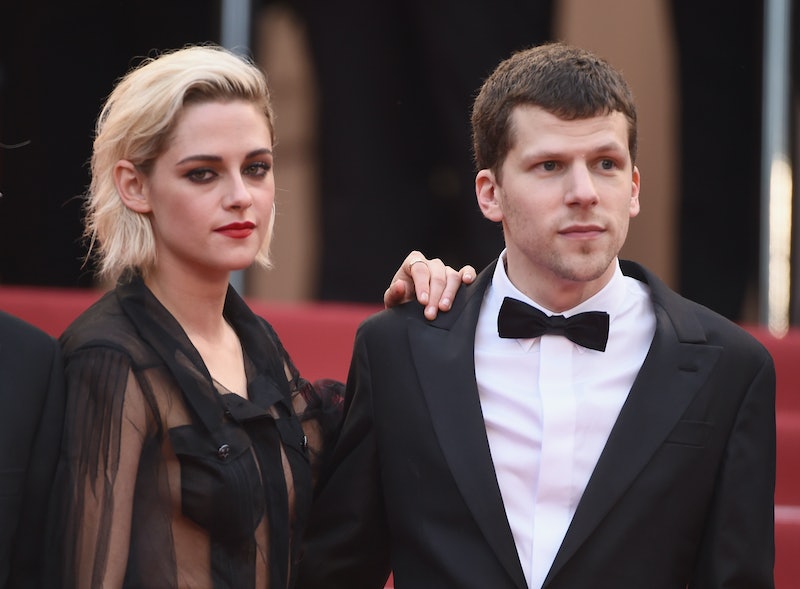 Jesse Eisenberg and Kristen Stewart just can't seem to get enough of each other. The two stars are headlining a movie for the third time (Adventureland and American Ultra being the others) in the new film Café Society, which is directed by Woody Allen. The movie takes place in 1930s Hollywood, and revolves around young Billy (Eisenberg), who moves to the West Coast with big dreams and a big connection in his uncle, a major Hollywood agent (Steve Carell). But things get complicated when Billy falls in love with his uncle's secretary — and mistress — Vonnie (Stewart). The movie paints an interesting picture of a specific time in American history, but is Café Society a true story?

Like the majority of Woody Allen's work, the movie is a work of fiction that was written wholly by the director himself. But just because the movie is fictional, that doesn't mean that Allen wasn't inspired by some bits of real life. Perhaps most obviously, Eisenberg seems to be doing a pretty solid impression of Allen himself in the film's trailer, but the director is hardly the only person to inspire a character in the film. Here's what Allen told Stephen Galloway of The Hollywood Reporter when asked if Carell's character was based on a specific person:

"Yes and no. When I first started in the business, I was 16, 17, and I would go up to agents' offices. And these agents were very powerful figures to me. I remember going out to California once, going to William Morris, and there was a very beautiful receptionist there. And I thought, "My God, she's as beautiful as any of the movie stars."

So it sounds like not only Carell's character, but Stewart's as well, got their starts in a memory from early in the filmmaker's life. As for the film's setting of the 1930s, Allen doesn't really have any memories of that time since he was born in 1935, but that doesn't mean he's not fascinated by the idea of it. Here's what he said in the same interview:

"It was such a glamorous time in California. You'd read about the Mocambo and the Cocoanut Grove and Ciro's and all the movie stars going out at night. And then there was New York nightlife — socialites and politicians and gangsters."

To give his movie an authentic feel, Allen read gossip columns from the time, including those by legendary gossip reporter Hedda Hopper, who also influenced a character in the Coen Brothers' Hail, Caesar! earlier this year:

So even though Café Society is not based on a true story, it still seems to be at least partly inspired by some people Woody Allen met early in his career, as well as Hollywood's Golden Age in general. Plus, it continues the real life of tradition of Kristen Stewart and Jesse Eisenberg seemingly always being together, so there's that.