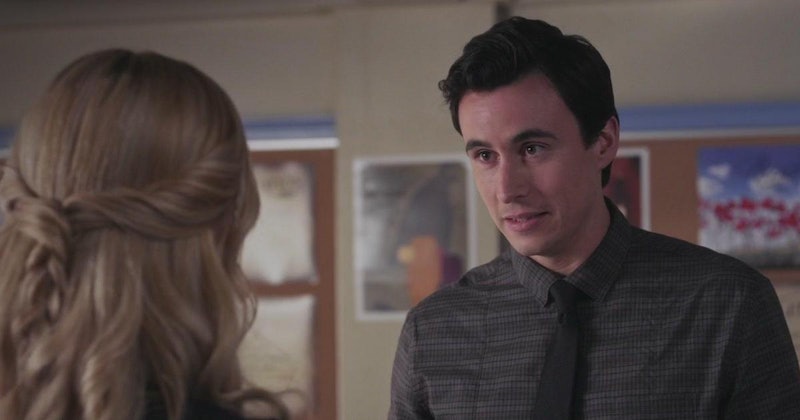 After returning to Rosewood following a five-year hiatus in order to speak on the behalf of their one-time torturer and former Big A Charlotte DiLaurentis, the Liars were once again sucked into their all-too-typical cycle of mischief, mayhem, and, even murder when Charlotte ended up dead at the bottom of the bell tower. The show's latest villain, Uber A, has picked up Charlotte's torch as the one to torment the Liars — but, even still, it might be the Liars who are their own worst enemy. Case-in-point (and spoiler alert!): During Tuesday's episode "The Talented Mr. Rollins," the Liars seek out Dr. Rollins after realizing that he is torturing his wife Alison because he believes her to be Charlotte's murderer, but they find him in the worst way imaginable. While chasing Dr. Rollins through the woods, Hanna accidentally runs him over with her car in an effort to save their troubled friend. Given that the Liars were burying someone in the Season 7 premiere, it would make perfect sense for Dr. Rollins to be the body going into the ground — but that doesn't mean it's the case. Could the Liars be burying someone who isn't Dr. Rollins?

It's definitely possible, though it would mean that the Liars are in for a world of trouble. (I mean, two dead bodies in mere hours? That's not boding well for their chances of staying out of prison as adults.) There are a few clues that suggest that, perhaps, Dr. Rollins isn't the person that the Liars are burying in the woods. For one thing, there's something that doesn't seem quite "right" about the dialogue during the burial scene, which we saw in the opening of Season 7. Spencer tells Aria, "It was a well thought out plan, and when it ends like this, it's called first-degree murder." Well, sure, but... is it first degree murder? Technically, a hit and run could get the Liars charged with first-degree murder, but had the Liars gone to the police in the first place, it would have likely been obvious that the situation was an accident — and all of the girls in the car, plus Alison, could corroborate the story.

Aria also states "How could we let this happen?" when the Liars are burying the body in the woods — just a little strange, considering no one "let" anything happen in this case, and hitting Dr. Rollins was a total freak accident. Maybe that's because Pretty Little Liars has yet another trick up their sleeve. Aria could be referring to someone else that they let die, or, perhaps, killed with more intention than Hanna did with Dr. Rollins — like, say, a witness who saw Dr. Rollins' death.

There's also the chance that, perhaps, the Liars are referring to Dr. Rollins — but he didn't die the way we thought. Though he definitely looked dead crashed through that wind shield, it's very possible that Dr. Rollins was able to walk away from the car accident — I mean, this is PLL, after all. If he did walk away, perhaps Hanna decided that she couldn't let him ruin her life and decided to end him once and for all. That would certainly make the stakes a lot higher for the Liars (I mean, a car accident is one thing, straight-up murder is another) and would explain why the Liars have a conversation that doesn't quite match up with the events we saw in the episode "The Talented Mr. Rollins."

Only time will tell what the real story is with who the Liars are burying, but given that the body count for Season 7 is going to be high, we should learn to expect more than just one character's death.