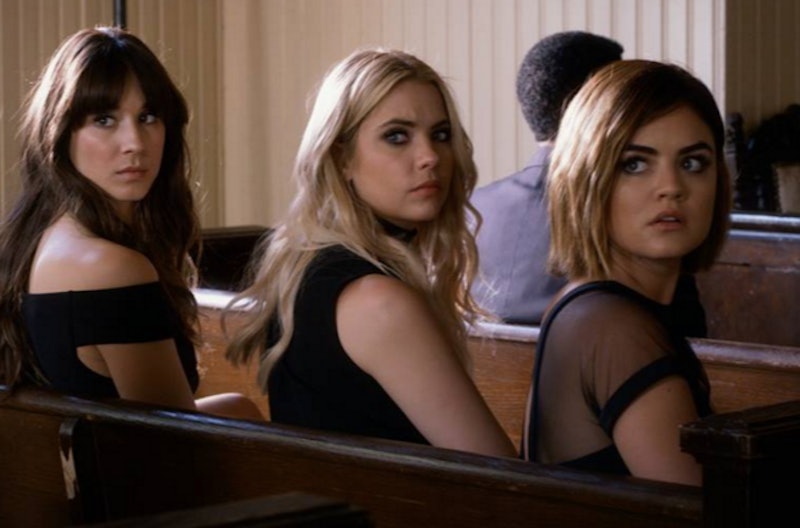 As we get ever closer to the Season 7 premiere of Pretty Little Liars, show runner I. Marlene King can't help but talk about the new episodes. The first, "Tick-Tock Bitches," airs on June 21, but some lucky people had a preview of it on Wednesday at a Freeform special event in the Hollywood Forever Cemetery. Most of the speculation surrounding Pretty Little Liars has revolved around Hanna's disappearance, and whether Ashley Benson's character will actually be killed off or not. According to I. Marlene King, and members of the cast who attended the special event including Keegan Allen and Lucy Hale, Season 7 features a massive death toll. Now the question on everyone's lips is will some major cast members be killed off, and who might die in Pretty Little Liars Season 7?

As all of the publicity so far has featured the hashtag #SaveHanna, it's likely that the first few episodes of Season 7 will revolve around the characters searching for, and trying to save, Hanna. Whether or not she is even still alive is a huge topic of conversation, especially as the synopsis for "Tick-Tock Bitches" says that Hanna has met a "dark fate." While this doesn't definitely mean that Hanna is dead, it's not looking particularly hopeful, since she was used as bait to lure Uber A out of hiding.

As well as discussing the fact that there will be a proposal and a wedding in Season 7 of Pretty Little Liars (I'm personally holding out for Ezria), Variety reports that I. Marlene King was quick to discuss the darkness of the show at Freeform's Hollywood Forever Cemetery event on Wednesday. King said, “It will be the biggest body count we’ve ever had on a season of Pretty Little Liars.” Considering there have been a copious amount of deaths on the show to date in its six seasons, it's interesting news that Season 7 will be particularly bloody. And it also makes it more likely that a main cast member could be about to die.

Variety also reports that King said, “The show is coming to a closure of sorts, and that’s all we can say for now." Coupled with Freeform's oblique statement that “This is the end of PLL as we know it,” it certainly sounds as if Season 7 is going to be all kinds of dramatic. But other than Hanna, which other major cast members might meet a grisly end?

Everyone on the show has had brushes with death, but no-one has avoided their own fatality more than Alison DiLaurentis. At the end of Season 6, we found out that Alison's new husband Elliott Rollins, is working with Mary Drake, the twin of Alison's mother Jessica DiLaurentis, and Charlotte's biological mother. Mary Drake seems dangerous, and the fact that Dr. Rollins is working with her could spell bad things for Alison, who seemed to be having a lot of little accidents throughout the sixth season. What more fitting way to bring Pretty Little Liars to an end than with Alison's disappearance or death?

For now, we can only speculate over who might die in Season 7 Pretty Little Liars . But as all signs point to the show coming to an end, it's very possible that some core cast members might be about to die, especially as one of them could be Uber A.