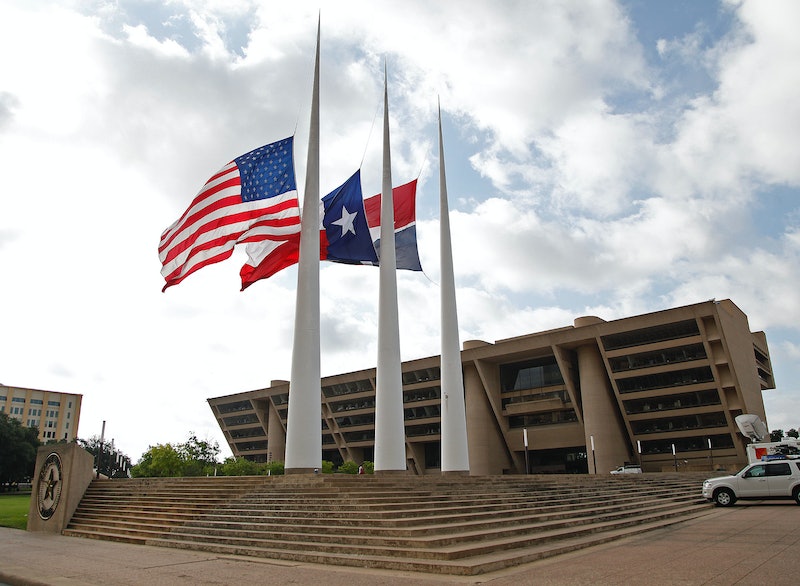 Many were left heartbroken in the aftermath of a deadly shooting on Thursday that specifically targeted police. The response was overwhelming, with many coming out to support those suffering from the Dallas massacre. Even President Obama took to the airwaves to condemn the violence and show support, saying, "Let's be clear: There is no possible justification for these attacks or any violence to law enforcement." The attack took place during the peaceful protests, a reaction to the murders of the two black men who were shot and killed by police earlier this week: Alton Sterling in Louisiana and Philando Castile in Minnesota. But the anti-police brutality rally was cut short by a fatal sniper attack, left five Dallas officers dead and seven others injured. In addition, two innocent protesters were also shot.

Some of the victims' families are wanting to remain anonymous, but others are coming out. One police victim is Dallas Area Rapid Transit (DART) Officer Brent Thompson, who was a newlywed. Another, Dallas Police Officer Patrick Zamarripa survived three tours in Iraq before being killed in the line of duty in Dallas.

Most of you already know this by now today in Dallas, my son is a police officer in Dallas he was working there the rally in downtown where my son was shot and killed by a sniper along with four other police officers maybe more at this moment. I’m still at the hospital here in Parkland Hospital to see him be moved to the medical examiner’s office – need prayers to get through this.

As heads and hearts are low, so are the flags that Obama ordered be set at half-staff until Tuesday. According to a tweet from the Dallas Police Department, others are showing their support by leaving flowers in front of the department. Their message has since gone viral, with even ABC News sharing it on social media.

Two squad cars, situated in front of the department entrance, have also been dedicated to collecting flowers and condolences for those who are grieving:

And on Friday afternoon, there was an interfaith prayer vigil at Thanks-Giving Square, a local gathering spot, to honor the officers — the turnout was breathtaking:

If you're too far away to show your support by leaving flowers or attending prayer vigils, here's a way to help by donating.