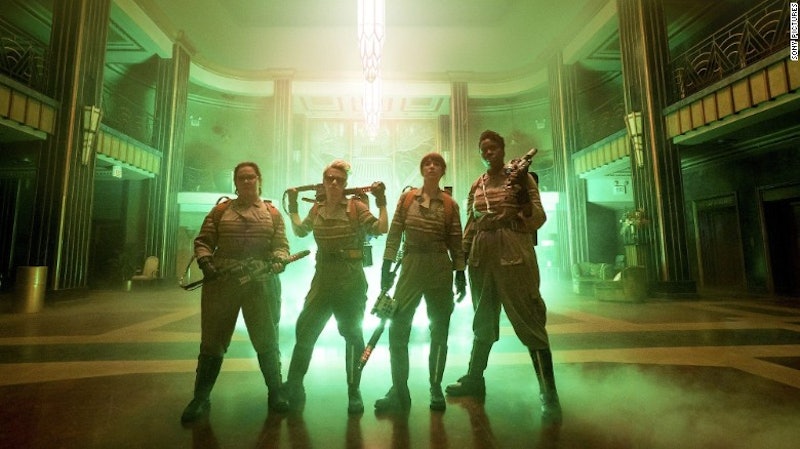 A gothic castle doesn't have the same goofy flavor as a haunted fridge, but the Boston University Castle lends plenty of its own spooky lore to the new Ghostbusters film due July 15. With its flowers and classic landscaping removed, the Castle makes a foreboding appearance as the fictional Aldridge Mansion at the heart of the movie. And so while, no, the Aldridge Mansion from Ghostbusters isn't real or a place where you can vacation next summer (sorry, paranormal activists), the Castle's distinct architectural style and chilling connections to the Lizzie Borden murders will offer a few real-life scares all the same.

According to Boston University, the 100-year-old castle was first owned by William Lindsey, Jr., a local business owner and author who was a major fanboy when it came to all things Medieval. After amassing a fortune in the industrial revolution, Lindsey devoted himself to writing and building the castle of his dreams, choosing a specific blend of darks woods to decorate the palatial home while installing a secret study for his creative practice. The gothic building eventually wound up became a fixture on the university's campus, and the high Medieval style copied the grandiose details of European religious buildings by implementing exaggerated angles and flying buttresses, qualities now associated with gothic architecture. The film industry historically uses this form of building in horror movies, making gothic architecture feel especially spooky and a particularly good backdrop for a movie like Ghostbusters.

The scarier connection to this building's story comes from Lindsey's extended family, however. It turns out that the owner of the castle was third cousins with Lizzie Borden, the woman remembered for being tried and acquitted for allegedly giving her stepmother 30 whacks with an axe. Boston University reports that Lindsey sat with Borden during the trial and sent her care packages while she was in jail.

Sounds like a scary slumber party, right? The Boston University Castle has also been the background for dramas, including 21, so this isn't its first time starring on screen. There's something truly freaky about a building that can double as an Ivy League school and haunted mansion — here's hoping it also proves to be a good luck charm for this new reboot.