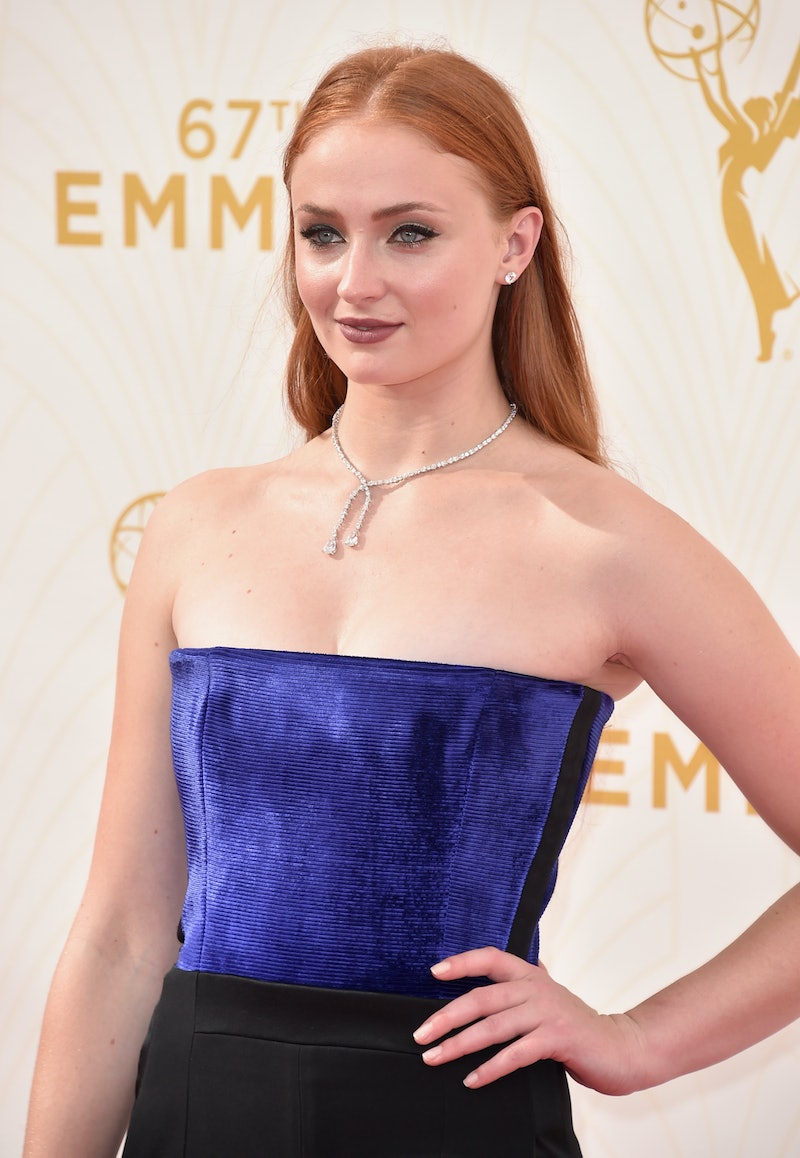 At last year's ceremony, HBO's Game Of Thrones broke the record for the most wins by a single season of a show in Emmy history. Having been nominated for a whopping 24 awards, the show ended up taking home 12 trophies, shattering the previous record set in 2000 by the first season of The West Wing (nine). The fact that GoT broke records with its fifth season (its most controversial and critically-mixed to date) raises the question of whether or not the show will be able to top itself this year with its more celebrated sixth season… or whether the show has already peaked with the Television Academy. Either way, voters should make sure they save room for one GoT actor in particular — because Sophie Turner deserves an Emmy for her work this year.

It's easy to forget at times, but when you go back and re-watch Game Of Thrones Season 1, it's remarkable how much has changed. Watching the Starks all happy and together at Winterfell, seeing long-dead characters like Robert Baratheon and Viserys Targaryen, remembering a time before dragons and magic… it's all like having a major case of déjà vu.

Six seasons of war and violence and torture have altered all of the surviving characters in irrevocable ways; but some of those changes have been more drastic than others. Jon Snow is still essentially a mopey bastard; Arya is still feisty, if slightly more murder-y; Cersei is still power-hungry and ruthless. But of all the characters who have survived from the pilot through the Season 6 finale, Sansa Stark is one of the ones who has undergone the biggest transformation.

From the time we met her, the elder Stark sister has transitioned from a naïve lady obsessed with fairy tales and princes to a perennial victim suffering at the hands of a series of abusers including Cersei, Joffrey, Littlefinger, and Ramsay; then from an increasingly savvy student of the game of thrones to a full-fledged player, almost single-handedly saving the North and reclaiming her homeland after Jon Snow pretty much mucked it up during the Battle of the Bastards.

Of course, none of this would have been nearly as compelling without Sophie Turner's performance; the actress, who had just turned 15 when the pilot aired on HBO, has grown just as much as her character over the years, evolving before our eyes from a wide-eyed child in awe of the fictional world around her to a mature young woman more sure in her craft. For fans of the actress and the character, Season 6 was the moment they had been waiting for, as Sansa finally took charge of her own destiny and fulfilled the narrative promise that had been made at the end of Season 4 as she descended the steps of the Eyrie.

There's a reason it's so hard for more GoT actors to break into the Emmy game: since it's an ensemble show, none of the actors are submitted as Leads. Rather, all two-dozen-plus series regulars are forced to duke it out with each other in the two Supporting categories. That's a very limited number of spots for a very large cast, especially when you consider the sheer amount of quality shows that also have talented actors vying for consideration.

Out of last year's six nominees for Outstanding Supporting Actress in a Drama Series, only one is ineligible this year: Mad Men's Christina Hendricks. Of the rest, two are sure things: Uzo Aduba, last year's winner for Orange Is The New Black, and Christine Baranski, who has been nominated six years in a row for her role on The Good Wife. That leaves only four empty slots for everyone else to fight over, including perennial nominees like Downton Abbey's Joanne Froggatt or Maggie Smith and acclaimed newcomers like The Leftovers' Regina King or UnREAL's Constance Zimmer — not to mention Turner's own co-stars, Clarke and Headey, and other un-nominated GoT actors like Maisie Williams and Natalie Dormer.

I'm not saying a nomination for Turner is impossible, but it's definitely a long shot. There is just so much content out there these days that, unless the Television Academy takes drastic steps to increase the amount of categories or the number of nominees, there are bound to be outrageous omissions every year. We'll find out whether Sophie Turner is a bridesmaid or a bride when the nominations are announced this Thursday morning.