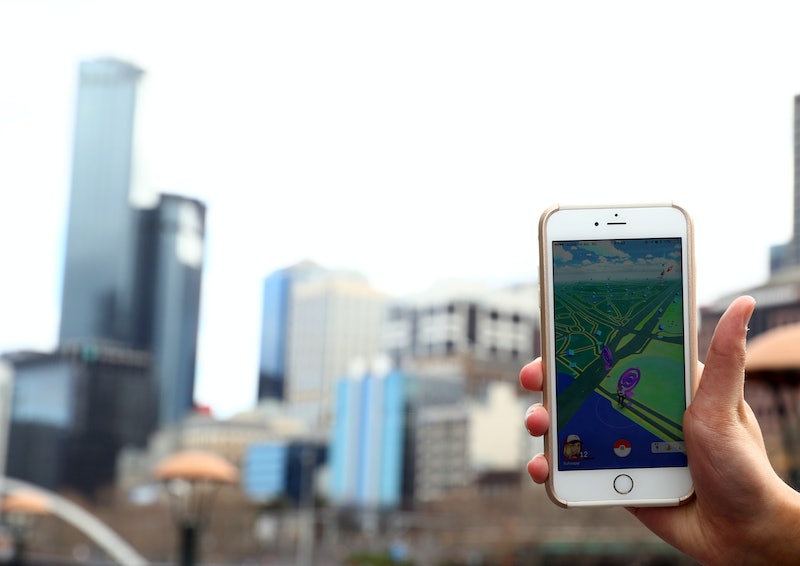 Let's be honest here: Unless you've been comatose for the last week, and I mean that quite literally, you've probably heard of "Pokemon Go." Whether you're as obsessed as the rest of the internet is another matter entirely, but even if all the talk of Team Valor and wild captures sets your eye a-twitchin', you're probably wondering how "Pokemon Go" works — not the rules of the game, but in the "how the heck are 2D Pokemon showing up on my decidedly 3D college campus?" sense. Don't let the Pokemon's cuteness fool you into dismissing the game; "Pokemon GO" might just herald a renewed interest in augmented reality (AR) technology.

For those who are starting from level zero, "Pokemon Go" is the mobile game that's taken over your Instagram feed and broken the internet far more than Kim Kardashian's butt ever could. Created by the former Google project (and now-independent company) Niantic, the AR game combines the real world and the beloved cartoon creatures of your childhood. The cartoon Pokemon are responsible for the "augmented" part of augmented reality; the game uses your phone's GPS, camera, and clock to generate a brightly-colored, fantastical version of the real world on your phone. Certain Pokemon tend to be found in their "natural" habitats; if you're walking by a lake, for example, you're more likely to find a Squirtle or Poliwag. Players have found Pokemon pretty much anywhere — the street, local landmarks, and even in the middle of gigantic fountains.

The result is a charming combination of the real world and all the cartoon fantasies you used to have as a kid. Although the creators have (understandably) kept mum on many of the specifics, here's what we know so far about the technology that making your Pokemon dreams come true.

Much like Google Maps or Wayze, "Pokemon Go" tracks your phone's location using GPS, integrating this information with an in-game map. In an interview with Mashable, Niantic CEO John Hanke explained that much of the data used to inform the location of Pokéstops and gyms was based on information from a previous AR game developed by the company, "Ingress." Many areas that proved popular with "Ingress" players are Pokestops today.

Unlike most multiplayer games of this size, "Pokemon Go" uses a single server so all players are on the same page, all the time. Hanke told The New Yorker that it's similar to how people keep up with stock prices. "Since everything is changing constantly, this is more like a real-time financial system [than a typical multiplayer game]," he said. It's a huge work load for a single server, which is probably why the game's server goes down so often.

Deciding Where (And When) Pokémon Appear

Not much is known about the algorithm used to distribute Pokemon in the game/our world, but Hanke told Mashable that the game uses local geographic data to place them in appropriate habitats. It's more complicated than you'd think — according to Mashable, the game even takes "climate, vegetation and soil or rock type" into account, although Hanke didn't say where that information came from. Furthermore, according to Vox, the game uses your phone's clock to track the time, so if you're out hunting at night, you're more likely to see fairy or nocturnal types.

So the game uses a blend of data pools and real-time location tracking to decide where and when Pokemon appear, but how do they show up on your phone? This part is actually super simple: Like pretty much every AR game, "Pokemon Go" uses your phone's camera to place an image of a Pokemon within your surroundings, and the GPS, accelerometer, and compass give the game an idea of which direction your phone is pointing toward.

More information (and probably more questions) will undoubtedly come to light as the Pokemania continues, but in the meantime, go catch 'em all.