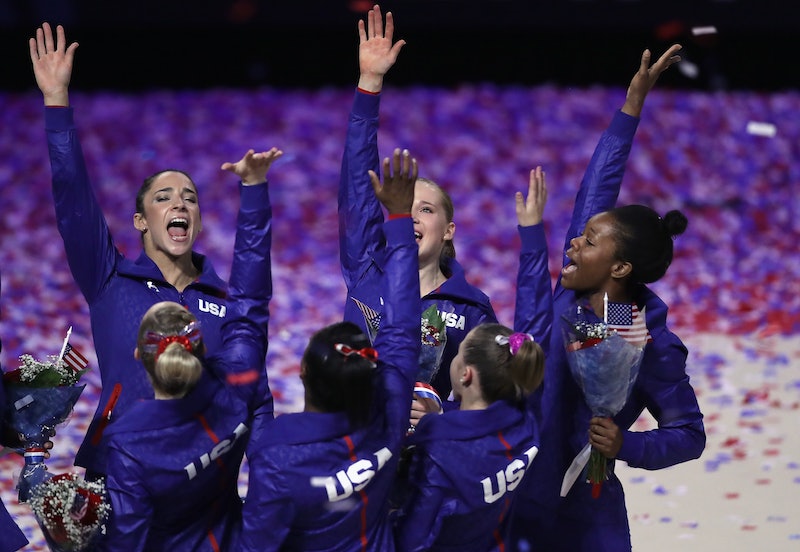 During a time in the world where it feels like every is at odds with each other, it's truly beautiful that the countries of the world can come together and be at odds with each other in a more safe, entertaining way. The 2016 Olympics are coming and there's a lot to watch. Familiar sports like soccer, tennis, and volleyball are presented alongside traditional Olympic pastimes like track & field, rowing, and triathlon. With all that and more, you don't want to miss when the Olympics are on.

Beginning on Aug. 3, NBC-Universal's exclusive coverage promises "2,084 hours of Olympic programming across 11 networks." That's a lot of Olympics, more than any one person can reasonably be expected to watch. While NBCU has announced which of its many channels will be participating, and what times certain sports are on, there isn't a clear schedule for what events will be on what channel. While it's likely that some of the channels will be highlighting a particular sport (expect plenty of Olympic golf on the Golf Channel), it's not yet clear which sports will be on which channel. However, with channels like NBC, USA, Bravo, CNBC, MSNBC, and Telemundo providing dedicated hours to the Olympics, in addition to NBC live streaming 4,500 total hours of content online, there's plenty to choose from. Here's you guide to knowing when you can tune into the Olympics on each channel.

NBC is one of two network channels dedicated to Olympics this August, but its coverage is starting a little later than others. While some events occur starting on Aug. 3, NBC won't be tuning into the Olympics until the Opening Ceremony on Aug. 5, and will finish its coverage with the Closing Ceremony on Aug. 21. It seems it's planning programming for nearly all hours of the day, turning NBC into a one-stop shop for all the biggest Olympic events. If you're looking for Olympic highlights, NBC is the way to go.

Telemundo will begin its programming on Wednesday, Aug. 3 with women's soccer, and will be paying special attention throughout the Olympics on the Mexican men’s soccer team as well as other Latin American athletes. Telemundo seems to be cornering the Olympic soccer market, meaning this is the best place to tune in for major events like the women's soccer gold medal match at 4:30 p.m. ET on Aug. 19.

Bravo will be serving as a home for 2016 Olympic tennis, and turns its broadcasting over to the sport starting on Saturday, Aug. 6, and concluding on Sunday, Aug. 14. Bravo will be airing over 12 hours in the first five days of its broadcast, which is great news for anyone who can't get enough of the sport.

CNBC will still remain the business-centric network it usually is, but will be turning over programming between 5:00 and 8:00 p.m ET on weekdays to the Olympic games, including a hodgepodge of sports like archery, beach volleyball, and water polo among others.

CBS Sports reports that golf hasn't been an Olympic sport for 112 years. With such a momentous return, it's no wonder that Golf Channel is getting in on the action by airing Olympic coverage of golf — which isn't much of a difference from its usual programming, but it's still a lot of golf. The channel promises to deliver 300 hours of Olympic coverage this year, almost all of it focused on the channel's namesake. Golf events begin on Thursday, Aug. 11 at 7:00 a.m. ET, and conclude on Aug. 20.

MSNBC, much like CNBC, will take breaks in its political news programming to deliver a hodgepodge of events like rugby, water polo, and volleyball. MSNBC's Olympic coverage begins on Saturday, Aug. 6 and will be occurring between the hours of noon and 5:00 p.m. ET on most of its Olympic coverage days.

USA Network will turn its daytime programming over to the Olympics, airing from 9:00 a.m. ET to 5:00 p.m. ET on weekdays starting Aug. 3, in addition to some weekend coverage. USA will be covering a variety of sports including rowing, cycling, and synchronized swimming.

NBC Sports Network will be covering the full expanse of the Olympic Games, beginning on Aug. 3 and concluding on Aug. 21. Its full days of programming, from 8:00 a.m. ET to midnight, will be dedicated to the games with special attention paid to USA's women’s soccer team, as well as the USA men’s and women’s basketball teams. They'll also be airing table tennis.

With so many coverage options, there's something for everyone this Olympic season. There's also a great deal of programming that is being saved for online streaming. Keep an eye on the live stream coverage schedule on NBC Olympics to ensure that you don't miss your favorite sport, be it shooting, sailing, or rhythmic gymnastics. The excitement around the 2016 Olympics is getting grander each day, and with so much coverage it will be impossible to miss — no matter what time you tune in.

More like this
What Is Jeanie Buss' Net Worth? The Lakers President Is Uber Rich
By Hugh McIntyre
'Games of Thrones' Fans May Recognise This 'Conversations With Friends' Location
By El Hunt
Fans of ITV’s 'Liar' Will Recognise 'The Essex Serpent's Picturesque Filming Locations
By Sophie McEvoy
Jake Daniels Just Became The UK’s First Active Football Player To Come Out As Gay Since 1990
By Sam Ramsden
Get Even More From Bustle — Sign Up For The Newsletter