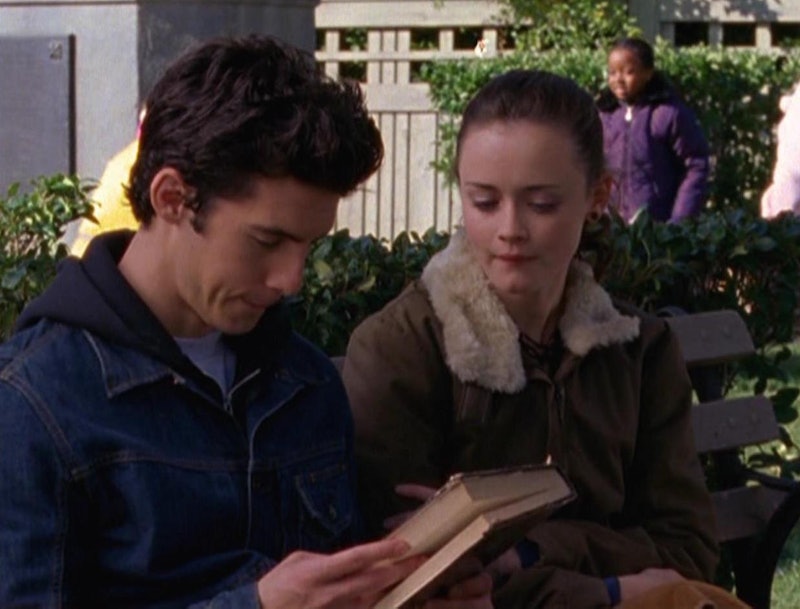 When it comes to Gilmore Girls, nothing is more relatable than the show's most cringe-worthy. Case-in-point: Rory's most embarrassing moment, which took place during a dinner at Richard and Emily Gilmore's residence. It took place during the episode "Swan Song" (Season 3, Episode 14), when Emily confirmed what she's already known for "11 dinners," according to her: Rory has stopped seeing Dean and started seeing Jess. It isn't long before Emily's backed Rory into a conversational corner, like the social goddess she is: Either Rory brings Jess to their next Friday night dinner, or else she'll meet him at some extremely public occasion, like Rory's graduation, and will bring all her friends and the Reverend along to meet him too. Wisely opting for private over public humiliation, Rory agrees to bring her new boyfriend along the next week.

But, it's Gilmore Girls, and what fun would we have if Jess was in any way nice to his elders? Naturally, Jess shows up painfully late, sporting a black eye. Since the last Rory heard from him was when they had a jealousy-tinged conversation about her spending time with Dean, she's quick to jump to conclusions: Did Jess get into a fight with Dean? Jess is never the sweetest cookie in the jar anyway, and Rory's implied suspicions make him surlier than usual.

The whole scenario is like a nightmare dreamt up by a group of imaginative writers drinking tons of coffee (go figure). Rory Gilmore has brought her most uncouth (but, LBR, desirable) boyfriend to meet her etiquette-obsessed grandma, and he's in a terrible mood because Rory's doubting him — so he's being (rather immaturely) rough. The worst of it is how lovely Emily is about it all (at least to Rory's face). We as the audience are all expecting for her to lose her cool, and for Emily's opinion to matter a little less to Rory because she couldn't even be nice to her boyfriend — but all that attention to etiquette has paid off, because Emily behaves herself beautifully. She tries to draw him out when he's churlish and barely talking, she studiously pretends not to notice the black eye, and she even gives Rory and him space when they go off to fight. I mean, check out the following exchange:

Emily: The roast looks perfect. Oh Jess, do you eat meat? I forgot to ask you.Jess: I'm a carnivore.Emily: Good, I don't see how anybody could resist meat.Jess: That's why we have teeth.Emily: That's how I feel.

Even when Jess is at his most clipped and monotone, Emily's a total delight — and this is what makes it so awful. Emily at her very best is seeing Jess at his very worst. And what's more, she knows the backstory — she's aware Rory's traded Dean in for Jess. This, the episode seems to say, is Rory's best possible romantic option in Stars Hollow.

The thing that really gets you in the feels is how perfectly the episode captures that feeling of introducing someone you're a little bit head over heels with to your family and them acting like an idiot. What is more embarrassing? Really, what? This is the most embarrassing. You can't choose your family but you can choose your friends and lovers. If your Emily Gilmore messes up, that's on them. If your Jess messes up, that's on you, because you chose to have them in your life. And that, my friends, is why this episode is so poignant.

But don't despair. It's not all doom and gloom: there's a great comic kicker to rescue you from endless cringe. Turns out Jess's black eye? It wasn't Dean. It was a swan.