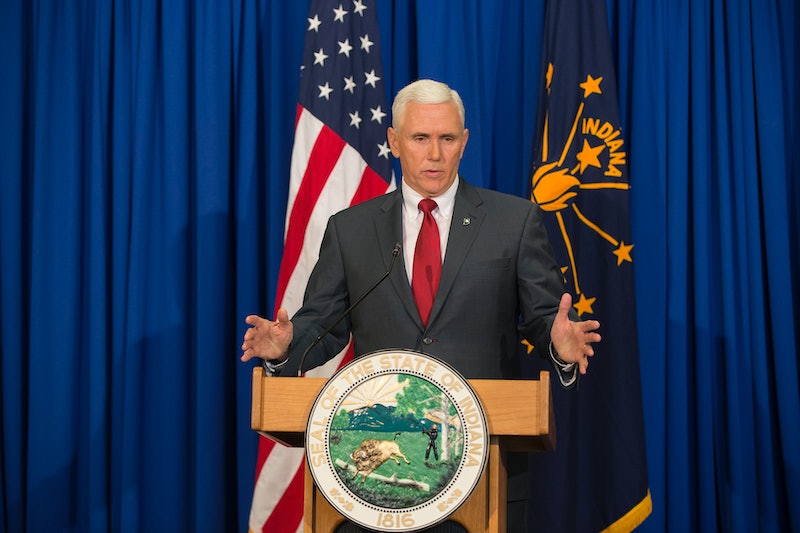 Earlier: Reuters has reported today that Donald Trump has selected Indiana Governor Mike Pence as his running mate, though Jason Miller, Donald Trump for President's senior communications advisor, said on Twitter that "A decision has not been made by Mr. Trump. He will be making a decision in the future and will be announcing his Vice Presidential pick tomorrow at 11am as planned." Pence, who was elected governor of Indiana in 2013, is known as a conservative leader who, according to CNN, "faced major political backlash over his decision to sign into law a 'religious freedom' measure that infuriated major businesses that saw it as anti-LGBT." But while Pence may be Trump's potential nominee for Vice President, their relationship is fairly new — Pence is not known to have worked with Trump before this campaign, in any capacity.

According to a New York Times piece published on July 12, "Mr. Pence has no political alliance with Mr. Trump. They are not social acquaintances, and Mr. Pence endorsed another candidate, Senator Ted Cruz of Texas, in the Republican primaries." In a piece on Pence published today, The New York Times noted that "the Indiana governor has only the scantiest of personal relationships with the man whose political future has rapidly melded with his own."

Pence is currently running for re-election as Governor of Indiana; to run as Trump's running mate, he would have to withdraw from that race.