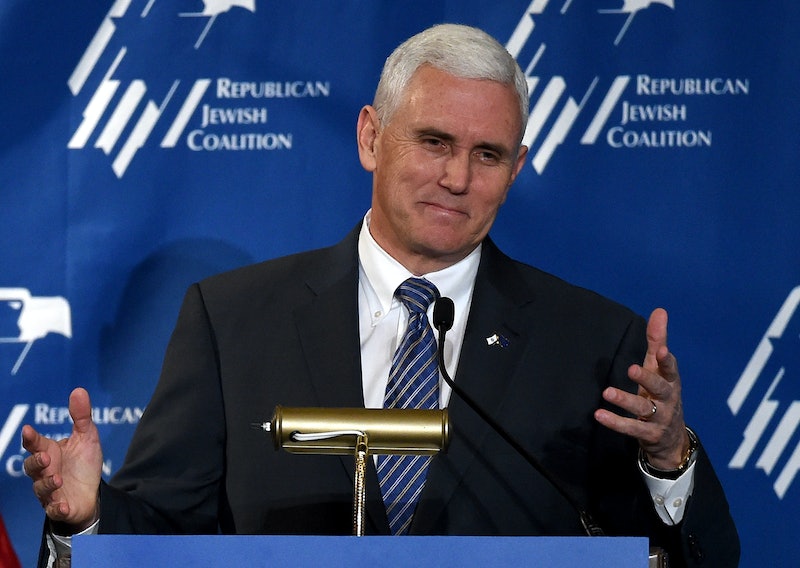 Earlier: Presidential nominee Donald Trump has been vetting vice presidential picks for a while now, and according to Reuters, there's a good chance that Trump's VP pick will be Indiana Gov. Mike Pence. If you've been following the presidential race, you may have heard Pence's name floating around, but you might still be wondering who the heck he actually is. You also, like me, may be wondering what ultra-conservative legislation he has supported in order to be considered seriously by Trump as a running mate. The truth is that Pence's political stances (and tweets) in the past may actually surprise you — but that doesn't make his views any less confusing. And that certainly doesn't mean they make the idea of Trump as a president any less terrifying. In fact, for many reasons, they make it even scarier.

But as the tweet below outlines, Pence did, in fact, tweet in December that he disagrees with Trump's call to ban Muslims from entering the country. He also, surprisingly, has expressed support of international trade agreements that Trump denounces. Those two points in the "pro" column, though, don't change this major "con": He has (possibly) agreed to run the country alongside Donald Trump.

And, for what it's worth, Pence's stance on LGBTQ+ rights is just as disturbing as believing it's OK to ban an entire religious group from entering the United States.

The tweet outlines the flaw that Pence's political aspirations are more important to him than his political assertions. And my goodness, that's dangerous.

According to Mother Jones, Pence "co-sponsored an amendment that would have prohibited same-sex marriage" while representing the 6th Congressional District of Indiana in 2003. He also voted against the Employee Non-Discrimination Act (ENDA) in 2007, according to the Advocate, citing it in a speech as an opportunity for ENDA to "wage war on the free exercise of religion in the workplace" because the act "extended the reach of federal law to cover sexual orientation." Pence also voted against the repeal of "don't ask, don't tell." And it gets worse.

The New Civil Rights Movement cited excerpts from Pence's website in 2000 as saying, "Congress should oppose any effort to put gay and lesbian relationships on an equal legal status with heterosexual marriage." Another disturbing excerpt from the website is Pence's views on LGBTQ+ people serving in the military, echoing his more recent "don't ask, don't tell" anti-repeal vote. As the archived website reads, "Homosexuality is incompatible with military service because the presence of homosexuals in the ranks weakens unit cohesion."

Problematic as his 2000 platform was, his policies as recently as 2015 are equally as discriminatory. In 2015, Pence made headlines for supporting a bill that would allow people to refuse service to gays or lesbians based on religious beliefs, according to Yahoo. However, Pence, insisted at the time that, "This bill is not about discrimination, and if I thought it legalized discrimination in any way I would've vetoed it."

Quotes like this, as well as Pence's few tweets that do seem to reflect an abhorrence of discrimination or a disagreement with Trump's platforms are not reflective of who he is as a politician. But even if they were — if we somehow put aside the dozens of votes that clearly outline his willingness to openly and wholly discriminate — the fact remains that Pence has now, possibly, set aside these beliefs for the sole purpose of getting to Number One Observatory Circle. For the opportunity to lead the country with someone who, in his own words, has plans for actions that are "unconstitutional" and "offensive."

That, in itself, is disturbing.

But what's truly concerning about Pence is what's documented in constitutional archives, rather than in a couple of halfhearted tweets. And that's his voting record. When you examine that, which is arguably the only accurate gauge we have of what a politician is really all about, everything you need to know about Mike Pence as leader is spelled out very clearly, and very scarily.