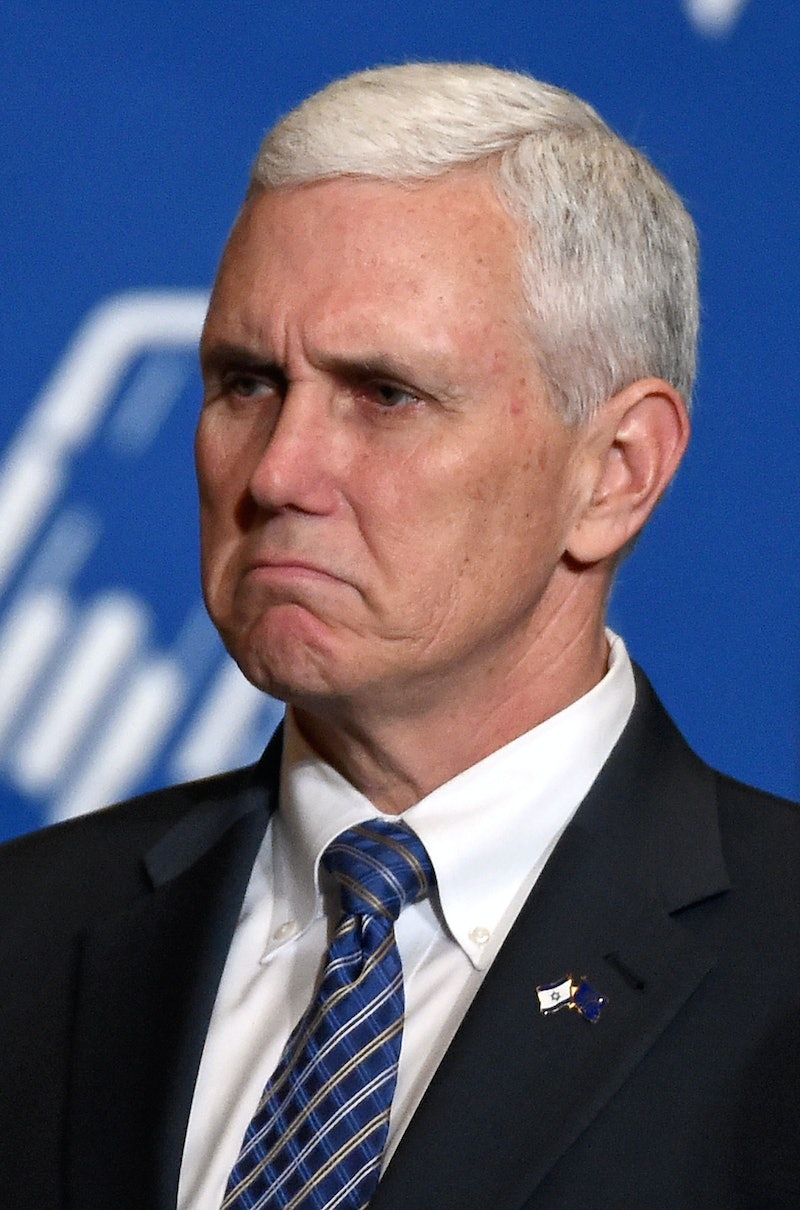 Earlier: Numerous outlets — including Reuters and the Indianapolis Star — are reporting that Trump will pick Indiana governor Mike Pence as his running mate (despite the fact that Donald Trump's senior communications adviser, Jason Miller, said earlier today that Trump has not yet decided on a vice presidential nominee and will announce his running mate on Friday at 11 a.m.). Though Pence has been governor of Indiana since 2013, his name — and his political beliefs — may not be well known to the vast majority of Americans. If you have heard of Pence, odds are it is because of his track record of coming out against LGBTQ rights — a stance which includes supporting legislation to ban same-sex marriage, opposing laws designed to protect LGBTQ people from discrimination, and signing the Religious Freedom Restoration Act, a 2015 piece of legislation that would have allowed business owners to refuse service to LGBTQ patrons on grounds of their religious beliefs. But Pence's voting record doesn't just show a resistance to supporting LGBTQ issues — it also shows a strong opposition to reproductive rights.

How strong? Pence has a shocking 0 percent rating by NARAL Pro-Choice America, a group that grades politicians based on their policies regarding reproductive rights. How did Pence earn this rating? Most notably, Pence signed a law in March 2016 that restricted Indiana women's ability to terminate pregnancies by banning abortions motivated by fetal abnormalities or other fetal characteristics. Additionally, the New York Times reported that the law restricted "fetal tissue donation and require[d] doctors performing abortions to have admitting privileges at a hospital or to have an agreement with a doctor who does."

According to NPR, the law also "requires miscarried fetuses, as well as aborted fetuses, to be 'interred or cremated by a facility having possession of the remains,' regardless of the age of the fetus." In a statement issued in March, Pence referred to the law as "a comprehensive pro-life measure that affirms the value of all human life" and said, "Throughout my public career, I have stood for the sanctity of life." Planned Parenthood and the ACLU sued Indiana over this law, which they called unconstitutional. (A federal judge suspended the law from going into effect in June).

However, Pence's anti-reproductive rights stance didn't begin this year, as this tweet with a screengrab from On The Issues shows:

According to On The Issues, Pence has voted to ban federal health coverage that included abortion, as well as human embryonic stem cell research, and has repeatedly voted against federal funding for abortion. Pence has gone on record as saying, "Sadly, abortion on demand is legal in America. ... I long for the day that Roe v. Wade is sent to the ash heap of history.

Though Trump has previously championed a slightly less hardline approach to abortion policy for the GOP, an NBC News report on the Republican Party platform, published on July 12, noted that "what's notable is that Trump had told NBC News previously that he would push for the Republican platform committee to add exceptions to abortion opposition, such as rape, incest and the health of the mother. But the Trump campaign made no such effort and the platform includes no exceptions." If Pence does run as Trump's VP, it may be a sign that Trump's stance on reproductive rights will be incredibly hardline — and an incredibly bleak prospect for pro-choice Americans.