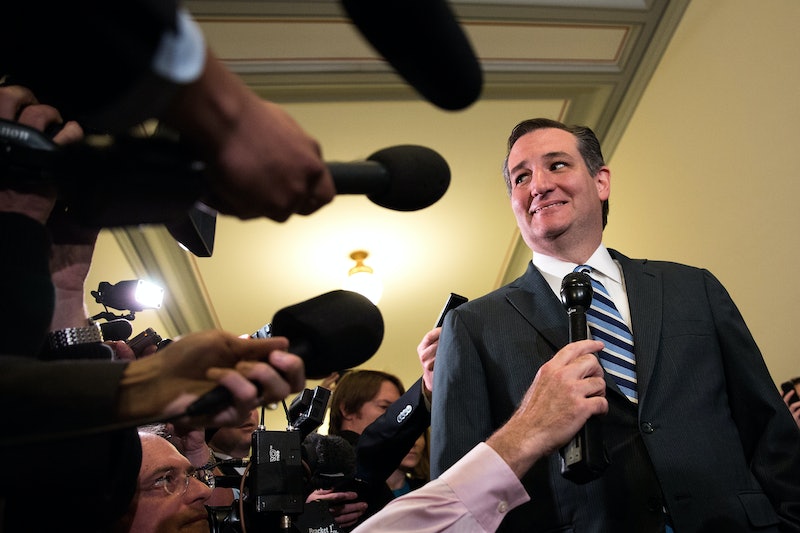 Earlier: On Thursday, early reports suggested that presumptive GOP nominee Donald Trump would announce Indiana Gov. Mike Pence as his vice president. The campaign is set to make an official announcement of its pick on Friday, a few days ahead of the 2016 Republican National Convention. While Republican politicians and lawmakers probably like a vice presidential pick that tows the party line, one thing seems off — let's not forget that Pence endorsed Ted Cruz in the primaries. And you may remember, Trump didn't have many kind words for "Lyin' Ted" in the run up to the general election.

Ahead of Indiana's primary in early May, Pence made his endorsement for the Texas Senator, stating, "I've come to my decision about who I'm supporting, and I'm not against anybody but I will be voting for Ted Cruz in the Republican primary. I see Ted Cruz as a principled conservative who has dedicated his career to advocating the Reagan agenda." He also wrote an op-ed about the Texas Senator, calling on the people of Indiana to cast a ballot in the state's primary, but writing that Cruz would have his vote "because he is a principled conservative who will work to protect our constitutional liberties, bring back better-paying jobs, and serve all Americans with the character and judgment needed to revive our national strength."

However, when Pence announced his endorsement of Cruz on CNN, it was shrouded in praise for the Donald. Before announcing that he would be voting for Cruz, Pence suggested how grateful he was for Trump's voice in the national debate on immigration, among other issues and noted that he wanted to "particularly commend Donald Trump ... for giving voice to the frustration of millions of working Americans with the lack of progress in Washington, D.C."

He added, "Whoever wins the Republican nation for president of the United States, I'm going to work my heart out to get elected this fall." Looks like he may be working his heart out while standing by Trump's side.

At the end of the Indiana primary, Trump left will all 57 delegates, Cruz ended his campaign, and it didn't take long for Pence to jump on the Trump train. Just a few days after he said he would vote for Cruz, Pence endorsed Trump, stating, "I'm fully supportive of our presumptive nominee, and I do think Donald Trump will do well in the State of Indiana."

Trump will formally announce his VP pick on Friday at 11 a.m. ET in Manhattan.