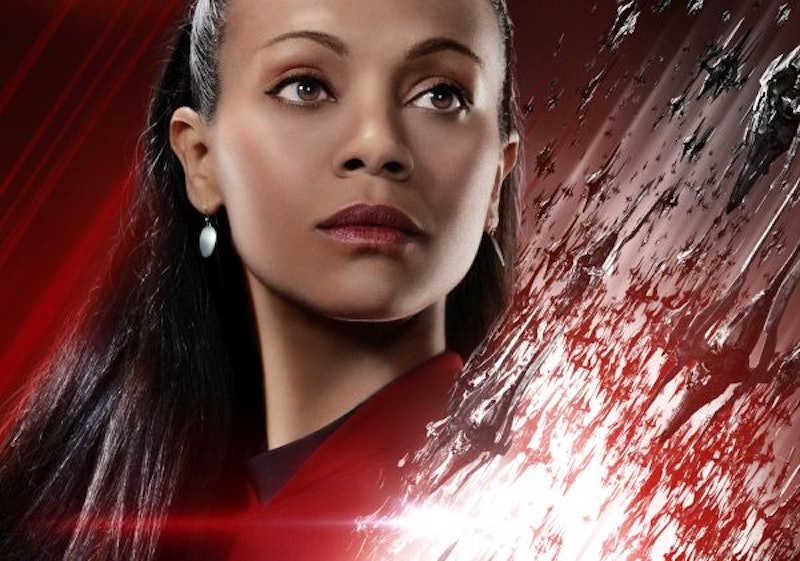 The original crew of the USS Enterprise from Star Trek: The Original Series sure was a sausage fest, and that didn't change much when J.J. Abrams brought the bunch to the big screen in 2009's Star Trek. Out of a seven-member crew on the bridge of the famous starship, there was only one woman: Zoe Saldana's Nyota Uhura. And while Uhura is supremely smart, brave, and good at being a communications office for Star Fleet, the new rebooted movies aren't doing the character any favors by attaching her to Spock. By giving Uhura a partner, even in a relationship that is a positive one, the films have diminished her somewhat, and made her destiny not her own. Yet while her storylines in Star Trek and 2013's Star Trek Into Darkness have been kind of a letdown, I have high hopes, and higher demands, for her portrayal in the upcoming Star Trek Beyond .

Going into the franchise, it's safe to say that all of the Star Trek actors had a lot to live up to in taking on such iconic roles, but Saldana no doubt had a ton of pressure on her as the only woman in the main cast. Original Uhura actor Nichelle Nichols had become a fan favorite throughout the years, and was a cultural icon for the Civil Rights movement of the 1960s when the original series aired. When Nichols was considering leaving the show after the first season, it was Martin Luther King, Jr. who apparently convinced her to stay. As Nichols revealed in an interview (via TVLegends), MLK reportedly told her, "Don't you understand for the first time we're seen as we should be seen. You don't have a black role. You have an equal role." So in taking on this role, Saldana had big shoes to fill. Yet although she has played Uhura wonderfully, the scripts unfortunately haven't given her much to work with.

By putting Uhura in a relationship with Spock, the films are featuring an interracial (and inter-species) relationship, which is commendable. But I can't help but feel that Uhura being in the relationship is actually diminishing of her character, in that she's the only woman on the crew, yet made to be in love and attached to a guy. While their diverse relationship is a positive, it's frustrating to see how Uhura is stuck to Spock; she's on the Enterprise because of him, but were it not for Spock's meddling in her placement post-Starfleet Academy, she likely would have ended up on the Enterprise on her own, for better reasons. But because of their relationship, Spock places her on another ship, so as to not appear as if he's playing favorites. Of course, Uhura complains to him, saying she deserves the Enterprise, and so Spock makes the switch, but it makes the whole thing suspect. Due to his actions, Uhura's story arcs, her choices, and her emotions will be tied to Spock's for the run of these films.

In addition to this, though, Star Trek didn't exactly steer clear of sexist tropes when it came to Uhura. One of her earliest scenes saw her undressing in front of her roommate (and for the camera) in a moment that seemed to serve no other purpose than to get Saldana's underwear-clad body in front of eyeballs. It was an unfortunate scene that saw an important and intelligent character solely used as eye candy (a moment that was disappointingly repeated in Star Trek Into Darkness with Alice Eve's Carol Marcus). Forget the fact that Uhura had decoded messages in multiple languages just moments before — the movie needed to get the babe naked, so it did just that.

Even more, Star Trek Into Darkness didn't do much to distance her from being a "ball and chain." In one particular scene when she and Spock are arguing about a choice he'd made that put him in danger, Uhura comes off as a nagging girlfriend. Her passive-aggressive actions and snappy attitude turn her into a shrew, which is an unfortunate example of how their relationship affects her character but not his. Uhura confronts him about his dangerous mission, saying, "You didn't give a thought to us. What it would do to me if you'd died, Spock. You didn't feel anything. You don't care." But her reasonable complaint comes off as whining, and it leads into a noble retort for Spock, so at the end of the argument, he comes off looking like the logical Vulcan he is while she just seems like a cliched hysterical woman. Yes, Uhura has a kickass scene with the Klingons in Into Darkness, but her legacy is tainted by that whiny fight.

So what to do with Uhura come Star Trek Beyond? I don't necessarily want her and Spock to break up. There have been far too many interracial couples in entertainment that have been used as cautionary tales, and I'd rather not see that happen to Uhura and Spock. But Star Trek Beyond definitely needs to do something to enhance Uhura's character. From what's known of the premise of the upcoming movie, much of the crew of the Enterprise is separated, and separating Spock and Uhura, even if to bring them together again later, might give her the chance to shine outside of her relationship.

And though this Kelvin timeline separates the new movies from The Original Series, there is some backstory from which the new film can pull inspiration, too. While there aren't really any Uhura-centric episodes in The Original Series, there are some where she's more involved, such as "Mirror, Mirror." But it's probably more beneficial for the Star Trek Beyond filmmakers to turn to the other films or even the animated series for ideas. There's an episode in the series called "The Lorelei Signal" in which the male members of the crew are incapacitated by siren-like beings and Uhura has to take over the ship. Or, in the 1985 novelization Uhura's Song, Uhura is featured using her signature linguistic genius, and the work has become a classic for Star Trek books readers. For Star Trek Beyond, I'd like to see Uhura act like the multi-lingual, super smart, problem solver she is — without Spock around, for once.