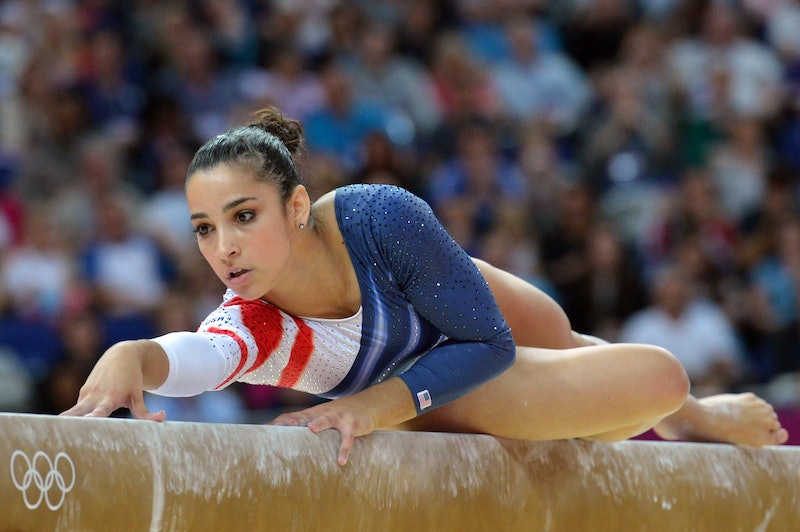 It's probably no surprise that most Olympic athletes opt to tie their hair back before competing in their respective events. I mean, any-length locks blowing in your face when you're trying to concentrate can be pretty distracting. But are there actual rules about how athletes have to wear their hair? I must say that I was pretty surprised about some of the rules that exist, and the extent that some of these competitors go to, to ensure that their strands won't misbehave.

Since each event at the Olympics is so different, there aren't really any overarching rules for how athletes have to do their hair. As you can probably imagine, the rules and regulations governing hairstyles are pretty different for more performance-based events where uniform guidelines are stricter (like gymnastics and synchronized swimming) versus what I'll refer to as match-based events (like taekwondo and volleyball). After all, when deductions can be made based on your appearance, it's probably something you'll pay a little more attention to. So even though most athletes can generally wear their hair how is most comfortable or practical for them, there are some events with extra rules. Here are the hair rules for six of those summer Olympic sports.

Womenboxing.com states that hair must be "secured with soft and non-abrasive materials," which, for safety reasons, makes total sense. And according to About.com, Olympic boxers must be clean-shaven. While beards aren't allowed, small moustaches (no longer than the length of the upper lip) are OK.

Although not specifically stated in the official rules from the International Federation of Gymnastics, gymnasts are expected to have hair tightly secured away from the face so that it does not obscure their vision at any time during competition. Because when you're flipping through the air, you probably want extra hair ties and clips to help you better spot your landing.

Similar to gymnastics, when you're spinning and flipping through the water, you can't really afford to have stray hairs come loose. USA Synchro synchronized swimmer, Leah Pinette, explained to Examiner.com that to make sure hair is tightly secured, it is most often slicked back into a bun, and plastered down with gelatin. Although gelatin can cause some damage to hair, when swim caps aren't used in competition, the sticky substance is apparently quite necessary to ensure hair stays frozen in place throughout a routine.

According to Teamusa.org, the referee has the right to require that any athlete tie his or her hair back securely if it is believed that the competitor's hair is so long that it could risk causing an inconvenience to the opponent. Women's hair is therefore typically tied back into a bun or ponytail underneath their helmets.

While there don't appear to be as many restrictions on competitors' hair in track and field with regards to how they choose to wear it during events, there are advertising restrictions. According to the United States Track and Field Association and the International Association of Athletics Federations, athletes are not allowed to use their hair to advertise sponsorships. More specifically, hair dying and/or shaving to represent an advertisement is prohibited.

Volleyball is another sport with fewer rules governing how athletes must wear their hair. However, according to Livestrong.com, long hair should be tied back so that it doesn't obstruct the player's jersey number.

Lesson learned? If you're constantly losing that hair tie around your wrist, any athletic friend you may have is probably a good source for backups.