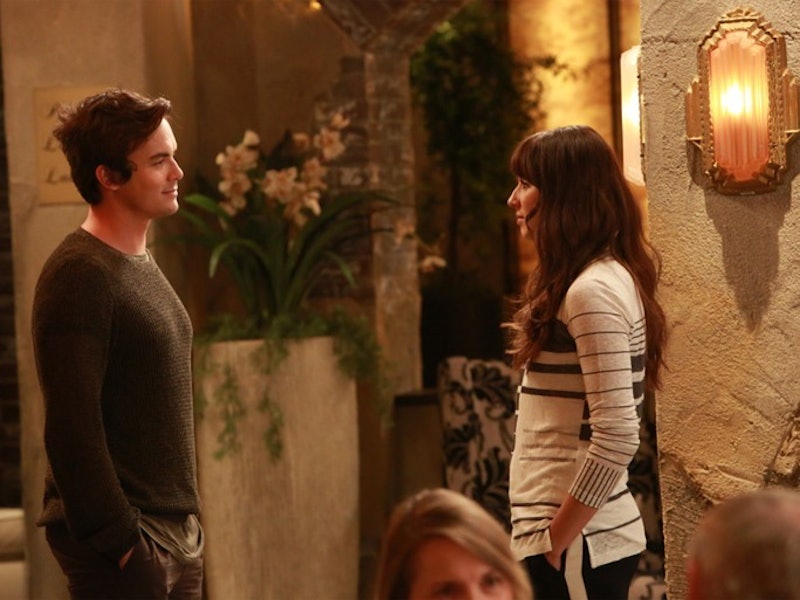 Toby and Yvonne may be heading down the aisle soon, but according to a promo for next Tuesday's episode "Along Comes Mary," they aren't the only ones who may be on their way toward wedded bliss. By the end of the night, one of our beloved Liars will be getting an unexpected proposal on Pretty Little Liars , which leaves us with one very important question — who? Obviously, all of the main 'ships are fair game here and I can practically hear all of the Haleb fans salivating at the very thought of such a romantic reunion. However, I'm fearful that this storyline could head in a very different direction and that Caleb will propose to Spencer, not Hanna, meaning that a Spaleb PLL wedding could officially get underway.

Look, to be honest, I don't like the idea at all. In fact, I'm worried that just writing the words could make it all come true somehow. But I can't help but think that this is all tied to Caleb's most recent disappearance. Sure, the writers may want us to think that Caleb bailed on his relationship with Spencer, prompting him to leave town, much like he did when he broke up with Hanna in New York City. But maybe it's not as simple as though. What if Caleb's only MIA because he's out shopping for a ring? The hosts of Bustle's Pretty Little Liars podcast, Taking This One To The Grave, also have some thoughts on Caleb's disappearance, Rollins' real identity, and more, which you can listen to below.

Caleb's been trying to prove to Spencer how much he wants to be with her and proposing is certainly one way to go about doing just that. Plus, it's something we're totally not expecting, considering Caleb and Spencer's relationship isn't in the greatest place right now. I mean, that heartbreaking scene with the door between them was very emotional and well done. I may not root for them as a couple, but there's no denying that's there's a special connection there. Also, Caleb tears are the most heartbreaking things in the world. Period.

And to add another layer of drama into the mix, it would also make Spencer's whole cheating debacle in the elevator all the more upsetting, knowing that while she was making out with some stranger, Caleb was off buying an engagement ring. Would she tell Caleb the truth about what happened? I'd like to think show, but as I've said many times before, this show isn't called Pretty Little Truth-Tellers. This show lives and breathes on lies and this could very well be one that weighs on Spencer throughout the rest of the season.

More like this
Everything To Know About Marvel's 'Echo' Series On Disney+
By Grace Wehniainen
Marvel's 'She-Hulk' Trailer Is Finally Here & The Hulk Lends A Big Helping Hand
By Grace Wehniainen
Will Viewers Revisit Welcome To Eden For Season 2? What To Know
By Kadin Burnett
The Good Doctor Already Added 2 New Cast Members For Season 6
By Brad Witter
Get Even More From Bustle — Sign Up For The Newsletter