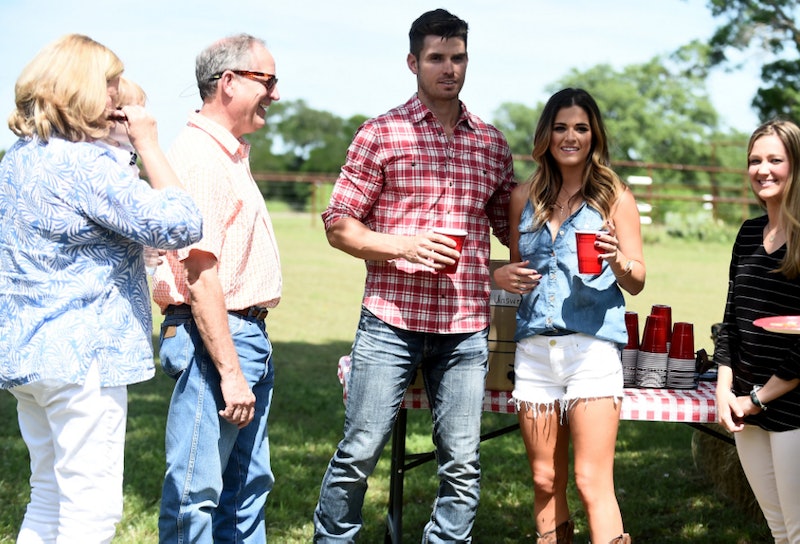 Are any Bachelorette viewers surprised that Luke Pell made it to the hometown dates? It's obvious that JoJo Fletcher is riding that chemistry wave with Luke. There's been a spark there since the beginning, which has left many other contestants jealous. In the July 18 episode, Luke and his fellow finalists Chase, Robby, and Jordan will have the opportunity to make introductions between JoJo and their families, with the hopes that she feels as at home with their loved ones as she does with them. Luke has been proud about being Texas born and raised; that's where he and JoJo are headed this week. What's in store for JoJo in another part of the Lone Star State? The most important people she likely needs to impress this week on The Bachelorette are Luke's parents.

It's an exception to the rule when a Bachelorette contestant doesn't describe himself as a family guy. And Luke is no different, posting about his parents and his sister regularly on social media. This meeting of the possible future in-laws isn't going to be a private affair, however. In the promo for the hometown dates episode, Luke brings JoJo to a party with his immediate family... and 50 of their friends. (JoJo cops to being nervous, but I'm sure she can handle it.) So it's a solid guess that the Pells are a pretty social group. Bustle reached out to Luke's parents for more information on their family and has not yet received a response.

JoJo gives a round of hugs to Luke's parents, Bill and Susie, in the preview, along with his sister, Abbie. Their social circle is clearly huge (everything's big in Texas!), but the Pells also spend time together as a small, close-knit family. Luke posted this Instagram of their party of four on a vacation together in the Yucatan this past Christmas.

What does the Pell family do when they're not on exotic trips together? Bill, Susie and Abbie Sue Pell all have partially public Facebook pages where they share life updates. Here's what I can glean: Mom and Dad went to the same high school that Luke and his sister attended, and I'm hoping there's a childhood sweetheart story coming JoJo's way. Up until December 2015, the Pells owned a restaurant in Burnet, Texas called Post Mountain BBQ, which is now closed. Luke's father's occupation is listed as "retired;" he used to work at the Lower Colorado River Authority as a "Former Hydroelectric Operator." His mother once worked as a customer service rep for a phone company. Abbie has a job in marketing, but also works as a photographer. Will Luke's name recognition lead to another family venture like the restaurant? May I suggest a bar, where Luke can play a weekly acoustic show?

Luke's parents seem to be lifers when it comes to their hometown. And though JoJo is a Texas native too, Dallas is about a three-hour drive from Burnet (guys, Texas is so large), so she may still be considered an outsider. Then again, restauranteurs have to know a little something about hospitality. This week, Luke's parents will get to practice their welcomes on JoJo.