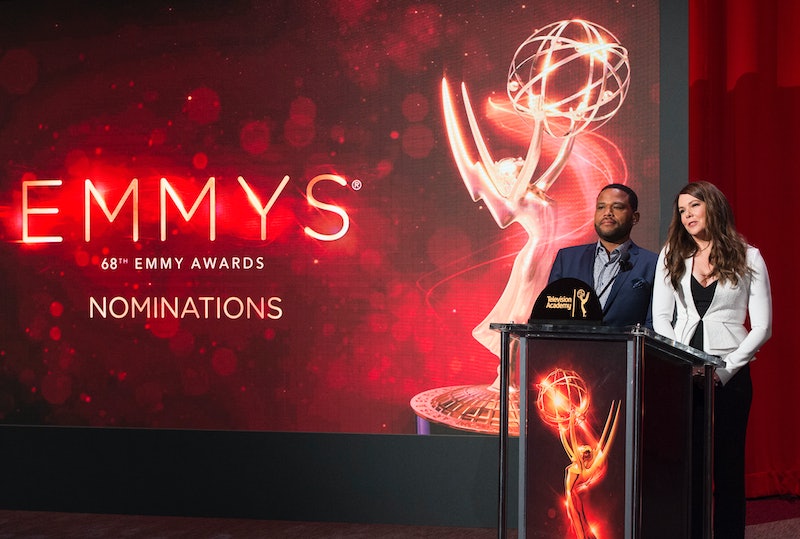 Last Thursday, TV stars Anthony Anderson and Lauren Graham announced the 2016 Emmy Primetime nominations. Even before they were finished, the entertainment community was knee-deep in that time-honored tradition of mourning the shows that were snubbed ( The Leftovers ) and celebrate the ones that managed to surprise us all ( The Americans ). But now that all that excitement is officially behind us — and we still have a full nine weeks to go until the ceremony in September — we have to find something to fill the time between now and then. So let the predicting and analyzing begin!

Part of the fun of any awards show is sifting through the myriad categories and nominations for patterns, records, and intriguing facts. Nobody has broken any records at the 68th Annual Primetime Emmys — yet — but a few series and performers are within spitting distance. Who could make history this year? How does this ceremony stack up against the last in terms of the diversity of its nominees? Which networks lost ground with Emmy voters… and which blasted ahead? Can anyone possibly dethrone Game Of Thrones?

Answers to all those questions and more can be found in these nine fascinating fun facts about the 2016 Emmys:

23: Number Of Nominations For Game Of Thrones

Between the Primetime Emmys (the televised portion which features Series, Acting, Directing, and Writing awards) and the Creative Arts Emmys (the untelevised portion which contains all the technical categories), Game Of Thrones emerged as the most-nominated series for the third year in a row, with a whopping 23 nominations — including six in the acting categories alone, the most nods for the show's cast yet.

Unfortunately, that falls one short of the 24 nominations the show accrued last year — and also short of the record: 26, held jointly by The West Wing and Hill Street Blues. Can GoT break it for one of its final two seasons? We'll have to wait (and wait, and wait) to find out.

21: Number Of Nominations For Performers Of Color

Perhaps the most encouraging fact about the 2016 Emmys is how remarkably diverse they are. Only five months after the latest round of #OscarsSoWhite, the Television Academy managed to nominate an impressive 21 performers of color in its 16 acting categories. That includes past nominees and newcomers alike, and it counts actors of African-American, South Asian, and Egyptian descent. It's also up from last year's total of 19 non-white nominees.

One notable absence? Orange Is The New Black's Uzo Aduba, who won Outstanding Supporting Actress in a Drama Series last year, but failed to even secure a nomination this time around. Speaking of, the categories that still need the most work are the Supporting Actor and Actress in a Drama fields, which both feature zero performers of color among their six nominees each.

7: Number Of Nominations For Female Directors/Writers

While racial diversity is on full display this year at the Emmys, there's one bit of bad news: gender diversity — at least behind the scenes — has actually decreased a bit. Of course the gender split is going to be equal in the acting fields, where the women get their own categories. But for directors and writers, it's a whole different story. In those six categories (Outstanding Directing and Outstanding Writing for Comedy, Drama, and Limited Series), there were only eight women nominated last year.

This year that number's down to seven… but two of them (Marti Noxon and Sarah Gertrude Shapiro) share a nomination (for writing UnREAL), so it's really only six nominations total. (Rubbing salt into the wound, the only other two nominated female writers this year, The Good Wife's Michelle King and Catastrophe's Sharon Horgan, both share their nominations with men.) Of course, even with such little representation, women still managed to take home a full half of the trophies in these categories last year, for Jill Soloway's direction of Transparent, Lisa Cholodenko's direction of Olive Kitteridge, and Jane Anderson's writing of the same. Hopefully women will emerge victorious again this year.

It's easy for Game Of Thrones to dominate the total nominations when it earns so many in technical categories like Production Design and Visual Effects. But when you strip away the Creative Arts Emmys and focus on the Primetime Emmys, a different show entirely comes out on top: FX's The People v. O.J. Simpson: American Crime Story, which earned a whopping 13 nominations in the televised categories, including six acting nods, and three apiece for directing and writing. (Comparatively, GoT only earned nine nominations in those same categories.)

56: Number Of Nominations For FX

When you factor the Creative Arts Emmys back into The People v. O.J. Simpson's total, it remains just as impressive — coming in at 22 nominations, only one behind Game Of Thrones. That incredible number helped catapult FX to new heights at the Emmys, greatly increasing the network's total from last year, from fifth place with 38 to second place 56. FX's cumulative was also helped by the likes of Fargo (the third most-nominated show of the year with 18 nods) and The Americans — which finally broke into the Drama Series, Lead Actor, and Lead Actress categories after three years of being perpetually ignored.

Although FX still remains second to HBO this year, the premium cable channel's lead is shrinking: its total nominations are down from 126 last year to only 94. Though this decrease is due primarily to HBO's lack of heavyweights in the TV Movie and Limited Series categories (where it boasted Bessie and Olive Kitteridge last year), it's still not a great sign for the network in this day and age of ever-increasing content options.

In 2013, Netflix made history as the first streaming service to land Emmy nominations for its original programming thanks to its brand new shows House Of Cards and Arrested Development. A mere three years later, and Netflix has tripled the number of its shows in contention at the Primetime Emmys, with House Of Cards being joined by Bloodline, Grace And Frankie, Master Of None, Unbreakable Kimmy Schmidt, and A Very Murray Christmas (nominated in the TV Movie category).

6: Number Of Nominations For Amy Schumer

Not only is the Inside Amy Schumer star nominated for Lead Actress for her own show, she also earned nods for Guest Actress in a Comedy Series (for hosting Saturday Night Live), Writing for a Variety Series (for Inside), Writing for a Variety Special (for her Live At The Apollo HBO special), Variety Sketch Series (as a producer on Inside), and Variety Special (as a producer on Live At The Apollo.) As impressive as that is, it still puts her behind the current record holder for most nominations in one year: Louis C.K., who set the record at nine in 2013.

2: Number Of Emmys Allison Janney Needs To Set A Record

Speaking of Allison Janney, if the actress were to win both of the Emmys she's nominated for this year — Supporting Actress for Mom and Guest Actress for Masters Of Sex — she would immediately set the record for most Emmy wins for a performer in history. At seven wins already (thanks largely to The West Wing), she is currently tied in second place with Ed Asner and Mary Tyler Moore; Cloris Leachman holds the record with eight.

Even if Janney doesn't break the record this year, there's at least a good chance that she'll tie it, having won for her performance on Mom the past two years in a row. And, at only 56 years of age, she's got plenty of time to get that last, record-breaking trophy.

1. Number Of Emmys Alan Menken Needs To Complete His EGOT

Only 12 people in history have successfully earned competitive awards from the Emmys, the Grammys, the Oscars, and the Tonys — a list that includes the likes of Audrey Hepburn, Mel Brooks, and Whoopi Goldberg. There's only one person who could possibly complete his EGOT and join their storied ranks at the 2016 ceremony: legendary Disney composer Alan Menken, who is nominated at the Creative Arts Emmys this year in the Original Music and Lyrics category for the song "A New Season" from ABC's Galavant.

(Menken already has 11 Grammys, eight Oscars, and one Tony thanks to his work on the likes of Beauty And The Beast, Aladdin, and Newsies.)

Will Alan Menken become the lucky 13th person to EGOT? Will Allison Janney become the most Emmy-winning performer of all time? Will women defy the odds to win for Directing and Writing? Will Viola Davis repeat her history-making victory as the first black woman ever to win Lead Actress in a Drama Series? Find out when the 68th Annual Primetime Emmy Awards air on Sunday, Sept. 18.