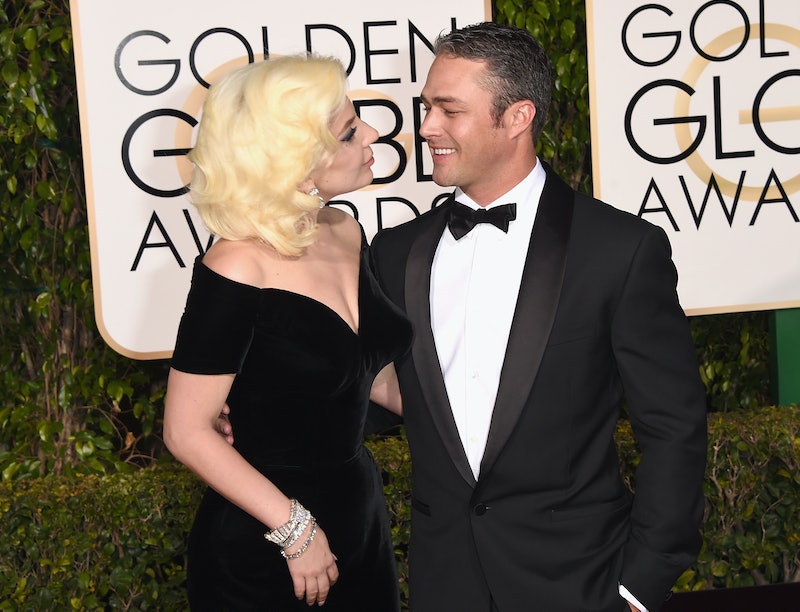 It's official: 2016 might just be the summer of celebrity breakups. According to what a source close to the couple tells TMZ, Lady Gaga and Taylor Kinney reportedly called off their engagement after five years of dating. The source didn't have too many details — like who initiated the breakup or why exactly it happened — but it sounds like they decided to end things pretty recently. Although some fans may have seen this coming since the couple hasn't been pictured together very often lately, this news is pretty unexpected. Bustle has reached out to their reps for comment but has not heard back.

As TMZ points out, breakup rumors first started circulating last week, when Kinney and Gaga spent Kinney's birthday apart... and when, at the same time, Gaga was spotted in Malibu without wearing her engagement ring... and still isn't wearing it now during a trip to Cabo. Since the giant heart shaped diamond is pretty hard to miss, it's noticeable when it's not on her finger, and it seems like it was the earliest sign that something could have been amiss in their relationship. So far, neither party has opened up publicly about their decision to call it quits, but hopefully, one of them will speak up soon.

Gaga and Kinney got engaged on Valentine's Day in 2015. They first met on the set of Gaga's 2011 music video for "You and I," which Kinney had a part in.

Fingers crossed these two update us on what's going on soon. In the meantime, you can find me in the corner, crying over the insane, out of this world wedding that will never be. So much heartbreak!

More like this
Who Is Betty Who Dating? The Australian Singer Is Married To Her Tour Photographer
By Radhika Menon
Zooey Deschanel Can't Be Anyone But Herself
By Samantha Leach
Sadie Sink Would Escape Vecna From 'Stranger Things' With This Taylor Swift Song
By Grace Wehniainen
Kanye Joked About His Divorce To Kim K In A Surprise Speech At The BET Awards
By Alyssa Lapid
Get Even More From Bustle — Sign Up For The Newsletter