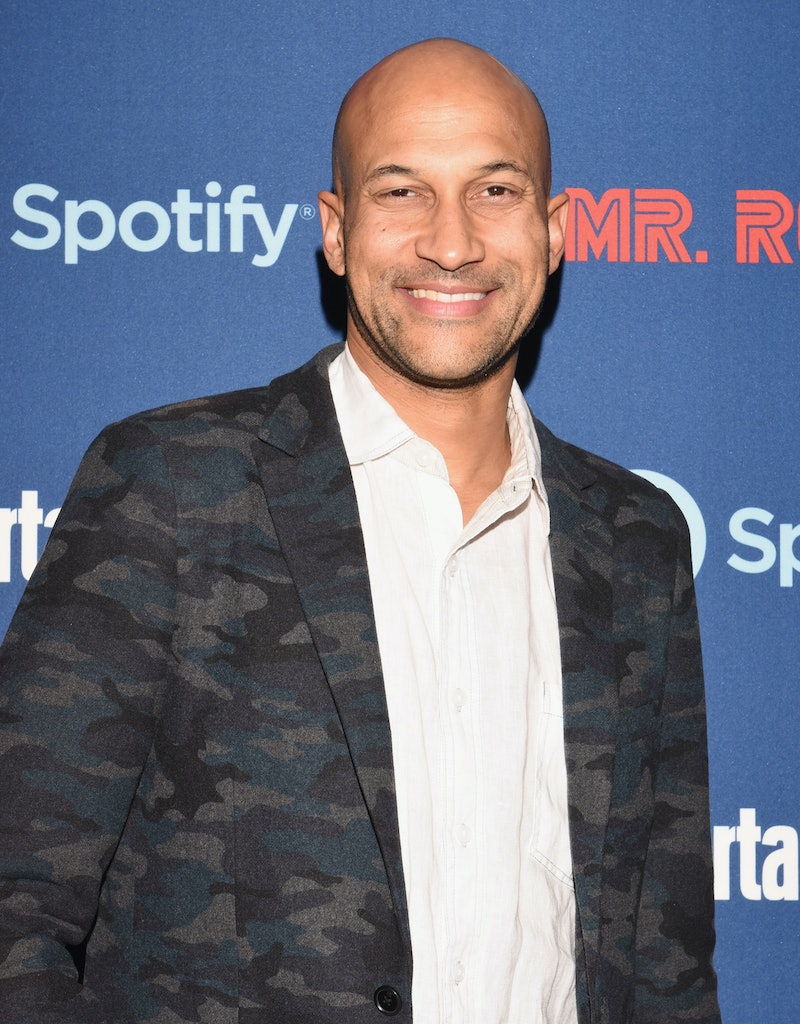 As soon as I ask Keegan-Michael Key about his recent Emmy nominations, the actor shifts the spotlight. "The thing that makes me the happiest is that people on our staff and our crew are being recognized," he tells Bustle while promoting his new film, Don't Think Twice. It's clear that even though he's nominated for Outstanding Supporting Actor in a Comedy Series for Key & Peele (and the show is up for seven awards in total), Key is the opposite of egotistical. As The 45-year-old goes on to explain,

"I’m a firm believer that if you try to surround yourself with the best people, or surround yourself with people that you can learn from, you never lose. It doesn’t matter whether you get an Emmy nomination or not. What’s important is that you’re surrounded by people who will only give 100 percent to their work."

From production people to the writers to the hair and makeup team, Key acknowledges that his and Jordan Peele's Comedy Central series, which wrapped in fall 2015, was truly a group effort. That mentality is also at the heart of Key's latest project — Mike Birbiglia's movie Don't Think Twice , in theaters Friday, July 22. Although it's very much a comedy, there's more depth and emotions than you'd initially suspect. Comprised of a hilarious bunch (both on-screen and IRL), the film explores what happens when six members of an improv troupe must reassess their careers after 11 years. In doing so, they also examine what really drives them and what brings them together.

When speaking to the movie's theme of teamwork, Key says, "It's very difficult to get anything done by yourself." Instead of pushing away other people, it's by working together that projects get accomplished — no matter what that project may be. As Key explains,

"At the end of the day, remembering that you’re simply part of a group — whether it’s a family, whether it's a corporation, whether it's a theatre troupe — that to me is what makes us different than other organisms on this planet. Because not only do we operate well in groups, but you’re allowed to pick the group you want to be in."

That last statement can double as a definition for friendship, and when it comes to the cast of Don't Think Twice , their bond actually extends beyond the screen. While filming, the group apparently formed a genuine connection — and Key assures me that he's not just saying that. Says the star, "They’ve been wonderful... I couldn’t wait to get to work. I couldn’t wait to get to set and be with these people. I adore them. I really do." In addition to Key and Birbilgia, the film's ensemble includes Gillian Jacobs, Kate Micucci, Chris Gethard, and Tami Sagher. It's practically a comedy dream team.

Although Key is best-known as a comedian, the MadTV alum takes a turn for the sentimental when discussing what he wants people to get out of this movie. Just as the characters do, he wants viewers to take a moment to think about their own goals, posing a series of questions to consider: "Do I have the same dreams now that I did 10 years ago, or 20 years ago? And were those dreams based on what everybody else is doing and I followed suit? Were those dreams based on fear?" Key elaborates,

"A person can say, 'Follow your dream,' but what that means is really discover what it really is. Because I think if you do that, you’ll find that you’ll end up being a happier and more fulfilled person. That’s kind of the takeaway for me — that sense of know what your dream really is and be patient that it may take awhile to figure it out."

And, Key adds, not going at it alone makes a huge difference. "It’s nice to be around people who are better than you are at something," he says. "Because then you have a standard that’s above, that's just out of your reach, that you can always be striving for." Well said.