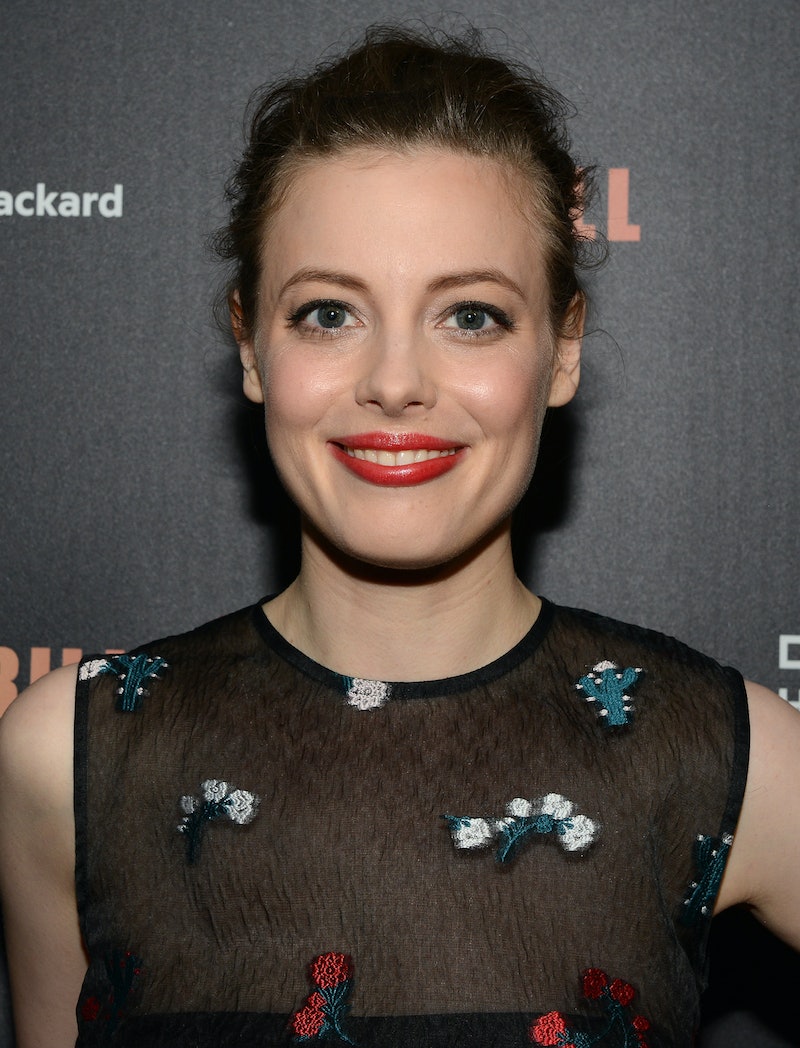 There are three rules in The Commune: Say yes, it's all about the group, and don't think. Nope, The Commune isn't a soul-sucking cult or the latest boyband á la One Direction. Instead, it's the fictional improv troupe from Mike Birbiglia's upcoming comedy Don't Think Twice, hitting theaters July 22. When I have the chance to sit down with star Gillian Jacobs, I ask which of those mantras she values most. She chooses "say yes," explaining how this movie is a testament to what can happen when you embrace new opportunities and face your fears head-on. In fact, that's been a recurring theme in her own career. Jacobs tells Bustle,

"This [movie] scared me because I had to improvise, so I said yes. A couple years ago, someone said, 'Do you want to direct a short documentary?' I didn’t feel qualified. I’ve never directed anything before, so I said yes. Lena Dunham asked me to write an article for Lenny and that scared the crap out of me, so I said yes. So I’m trying to do that in my life and go towards the things I’m afraid of and risk failing publicly. Maybe I’ll discover a new passion out of it."

When I comment on how it seems like those scenarios worked out for the best, Jacobs laughs and says, "I didn’t list my failures for you. I listed things that went well." She's humble, but realistic. And this may be where she and her Don't Think Twice character, Sam, differ the most. The 33-year-old describes Sam as a "real idealist," saying, "She has a hard time with change. She would like everything just to stay exactly the way it is, and that’s not the way life works." While her character struggles with leaving her comfort zone, that's where Jacobs flourishes.

Unlike her co-stars — Birbiglia, Keegan-Michael Key, Kate Micucci, Chris Gethard, and Tami Sagher — Jacobs had no background in improv prior to the movie and initially felt intimidated by the art form. Yet instead of running away from that apprehension, she let the others to show her the ropes, she says. The best improv lesson they taught her actually resonates beyond the movie:

"There are no mistakes. Sometimes you make a choice and then you immediately start regretting it. Like, 'That was stupid. Why did I do that? I shouldn’t have done that.' Trust that if you say we’re purple dinosaurs that the rest of the people on stage with you are going to make purple dinosaurs work."

Instead of beating yourself up over what seems like a mistake on-stage, Jacobs emphasizes the importance of being present in the moment. "Make decisions and then don’t question why you did it and trust that [the rest of the group] will pick you up," she says. On Don't Think Twice, the group's bond extended off-set. Jacobs compares the tight-knit nature of the film's cast to her days as Britta on Community, saying: "This felt similar to the cast of Community in that it was people I really respected, really made me laugh, and everybody had a different strength." The actors' chemistry in this movie is what makes it such a joy to watch.

And the lessons that Don't Think Twice imparts are equally compelling. "It’s not just a movie about improv. It’s also about failure and jealousy, and about acceptance and maturity and growing up," Jacobs says. "I think it’ll surprise you by how much it might move you." I couldn't agree more.