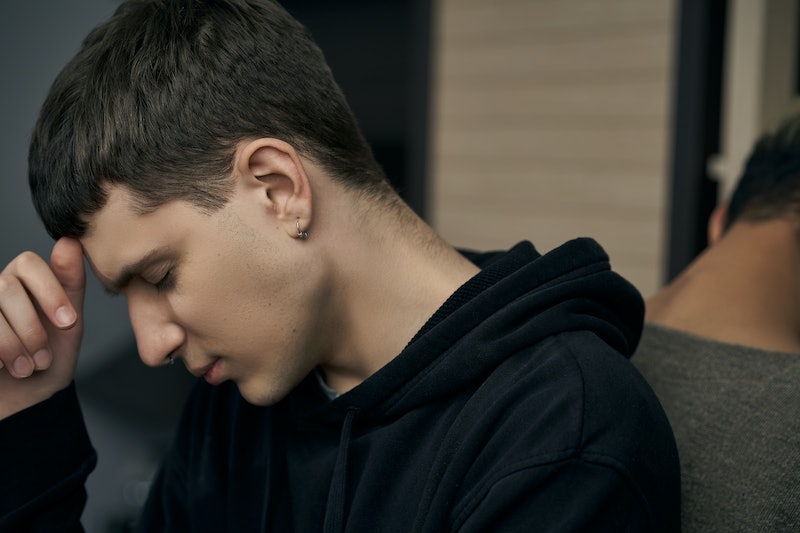 No matter how happy the couple, there are always going to be insecurities that surface at some point in the relationship. Yes, that means that even Chrissy Teigen and John Legend, in all their glamour and glory, face a healthy bout of self-doubt every now and then. The interesting thing is that witnessing insecurity in another person can actually be attractive — in some instances. We sometimes interpret good old-fashioned insecurity as cute shyness or endearing coyness. Eventually, though, if a partner is chronically insecure, it can take a toll on a relationship.

Nothing's wrong with being a little insecure every now and then. However, there's definitely a difference between being occasionally insecure and being an insecure person. When one person in a couple is the latter, it can put serious strain on the relationship, making it difficult for it to last in the long run. The worst thing that can be done in this situation is to enable your partner's wild insecurities. So if any of the following sounds familiar, try your best not to encourage these feelings or behaviors, even if it means you have to put your foot down and create some temporary distance between the two of you.

Here are nine signs your partner is insecure.

1. They Ask You A Lot Of Questions About What You've Been Doing

An insecure partner wants to gather as much information about what their partner is doing, who they're seeing, and where exactly they are. If you notice your SO asking a whole lot of questions after you've just spent a few hours apart, and if it's something that happens often, take it as a guarantee that they're struggling with deeply-rooted insecurities. These feelings may have nothing to do; they're a reflection of how unsure they feel about themselves, and that seeps out into their daily interactions. Unfortunately, this behavior can also be a sign of a controlling partner.

2. They Don't Go To Social Gatherings Without You

Someone who is insecure is someone who often smothers the people they love, even if they don't mean to. They want to latch onto you, particularly in public, in order to let people know that you two are an item. At first, you may have mistaken this as charming, but as your relationships deepens, you'll see that it's hard to handle. They might end up following you to dinner parties and social events, or practically begging you to accompany them on outings that they've been invited to. If this is happening over and over again, you may have to sit down and have a talk with them about how it's weighing on you.

3. They're Always Looking For Reassurance About Your Relationship

This is a habit that may come from experiences they had in their childhood or past relationships that they just can't shake. They need constant confirmation that they're making you happy and that the pair of you is on solid ground because it's hard for them to find that reassurance within themselves. Even when they don't verbally ask for these encouragements, they might indirectly hint at them through actions and expressions. "You may find yourself constantly reassuring him that he is good enough to be with you or that he deserves the good things that come to him in life," Kat Van Kirk, Ph.D. a licensed sex and marriage therapist, told Women's Health.

In this case, it might help to try and understand where these particular insecurities come from. Is there something in their past you don't know about yet? The more effort you make to learn about them and what makes them tick, the more likely you'll last (if that's your goal).

4. They Make You Feel Guilty When You Don't Call Or Text Back Right Away

"The insecure [person] tends to be smothering, critical, and jealous," Joseph Nowinski, Ph.D., clinical psychologist and professor psychiatry, writes for Psychology Today. Thus, they demand constant communication with their companion. If they can't be with you, they have to know what's going on on your end in order for them to feel comfortable with the distance. This kind of behavior overlaps with the jealousy card. They're just as envious of the time you devote to other people as they are unsure about whether you'll actually come home.

At the end of the day, you should never have to answer to anyone for what you're doing or where you're going, even if it's someone you love. Keep that in mind when you're dealing with an insecure SO, because once again, this trait can also be a sign of a controlling relationship.

5. They Talk A Lot About Your Exes Or Their Exes

Ex-partners are never a neat subject to tackle, but it's an especially messy one when someone in the relationship is painfully uncertain about themselves. Because they have a hard time generating love and acceptance for themselves, they tend to define themselves in relation to others around them, which means they hold on tightly to what transpired between them and their exes. They may talk continuously about how their last SO broke their heart. Simultaneously, they'll probably take a keen interest in whether you have any contact with your ex. If you do, the insecurity will take over and they'll start to interrogate you about how it all ended, and what your true intentions are with your ex.

6. They Tell You They Love You All The Time (And Expect You To Say The Same In Return)

Insecure folks need a whole lot of verbal love and affection. That may sound cute, like a furry puppy that wants to lick your face for hours, but it can get exhausting. The more doubtful they are about themselves and your relationship, the more they'll tell you they love you, all in an attempt to hear the magic words from your lips. You'll know it's crossed over into unhealthy territory if it makes you feel uncomfortable and you feel obligated to say the same in response.

7. They Often Apologize For The Smallest Things

Your partner may say sorry much more than they need to, all because they're afraid of upsetting you and subsequently wrecking the relationship. "Insecurities can stem from a 'critical inner voice' that we’ve internalized based on negative programming from our past," Lisa Firestone, Ph.D., clinical psychologist and Director of Research and Education for the Glendon Association, writes for Psychology Today. As a result, they apologize profusely for not picking up the right shampoo for you, or forgetting to call as soon as they got off their flight. These are normally things that couldn't bother you any less, yet they can't bring themselves to put the apologizing to rest. Take it as a sign that they're really worried that things might fall apart, and remember that none of that fear was likely caused by you.

8. They Loudly Stick Up For You When You Don't Feel Like You Need It

In theory, it's a sweet gesture, but it can be a little bit embarrassing if your SO is quickly puffing up their chest to defend your honor in a social setting when your friend was just poking innocent fun at you like they normally do. This heavy need to protect you is linked in with their possessive desire to keep you closely by their side. Although it may come from an innocent enough place in their heart, it's slightly irritating all the same, and another potential sign of a controlling relationship.

9. They Can't Take Any Constructive Criticism

Not all arguments are created equal. Some are necessary to your relationship and actually help you move forward as a couple. Then there are some fights that just take you in useless circles, leaving you to claw at each other mindlessly until you're blue in the face. An insecure partner is one who will have trouble arguing in a useful way because they find it nearly impossible to take on constructive criticism. "Many men who are insecure can't rationally view themselves through their own eyes," Van Kirk says.

If you're finding it too difficult to have a reasonable conversation with them about your relationship and your needs, don't be afraid to enlist an unbiased third party to help you wade through the communication. "The good news is that insecurity can be overcome. However, it can only be overcome when a person recognizes that they are insecure," Dr. Nowinski says. If you love each other enough, you can find a way to work through it — if that's what you decide you want to do.