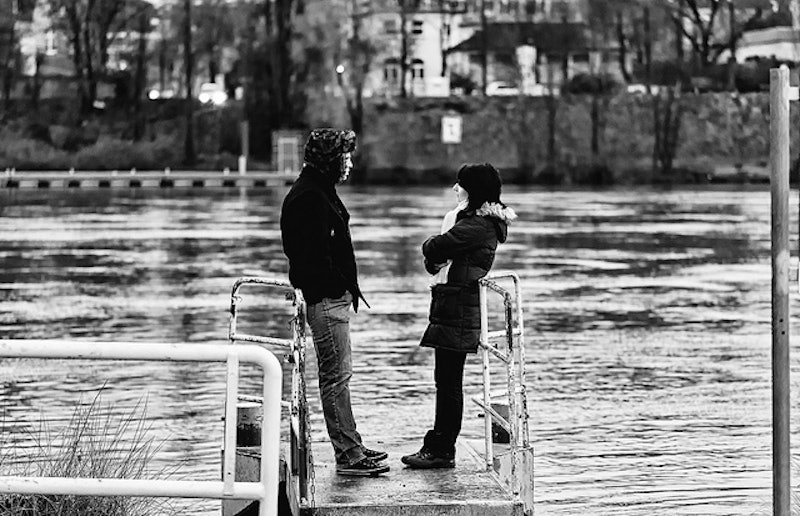 There's nothing worse than standing in line with a couple behind you who sound ready to scream, or worse, cry. If it's your friends who come to group events constantly with some kind of drama in between them, you wonder why they're still together. Fights don't seem fun. But the couple who claims they "never fight" is just as suspect. Really? Do they ever talk to each other?

Conflict, expressing your needs, and finding compromises are all healthy in the context of a relationship. But hurtful words sometimes can be hard to recover from, even when someone is truly sorry. Getting your fight game right is nearly as important as getting your love game on.

The art of fighting isn’t easily learned. You have to consciously make an effort to get “good” at it. I know, it sounds perplexing that one could be skilled at arguing. But trust me, there are people who can argue well, and there are those who cannot. And oddly enough, practice makes almost perfect. There’s a healthy way to argue and there’s an unhealthy, toxic, down 'n' dirty way of fighting. You don’t want to be that couple. So put down those defenses, take off your fighting gloves, and let’s learn how to fight fair.

Check Out Fight Fair: Winning at Conflict Without Losing at Love, $13, Amazon

You can fight, and then you can fight dirty. Couples that maintain a healthy relationship are not the latter. Words are powerful. And, more importantly, you can’t take them back. Once you start calling each other all the names in the book, you’ve just solidified an upcoming last chapter. So be wise, and chose your words wisely.

It’s completely normal to get heated during an argument. You feel like your partner isn't listening to you, this conversation is just going around and around and no way did he/she just bring THAT up. Insert cool-off time. When we are highly emotional, logic tends to go out the window. We might say things we don’t really mean, or act in ways that we shouldn’t. If you’re the kind of person who can get heated quickly, a cooling down moment may be necessary for you.

Couples in healthy relationships who can manage fights well all have one thing in common. They actually communicate about their issues. Instead of sweeping things under the rug, they are bringing them to the forefront and exposing their mess. The great part is, this is a temporary mess that will make for an even cleaner foundation. It’s easier said than done, but actually talking about your issues is the key to working through your issues.

Check Out Love is a Verb: 30 Days to Improving Your Relationship Communication, $7.99, Amazon

Listening is an important skill to have, but even more important when it comes to fighting. Often times, couples aren’t truly listening to each other during an argument. They are both just waiting for the other person to stop talking, so they can prove their point again. Sometimes it’s difficult to hear your partner when you feel like you’re in the right. But take down those defenses and be all ears.

Stick With The Present, Not The Past

Staying in the present moment is not only important in life, but it’s also crucial for healthy arguing. The best way to escalate a fight is to bring up things from the past. Comments like, “You can’t do anything I ask of you, just like that one time you didn’t pick up my sister from the airport” or, “Why don’t you leave me again like you did on my birthday” are only going to make the argument worse. If you feel like you are word-vomiting things about the past constantly, you should look into why you haven’t resolved those issues. Leave the past where it should be — in the past.

Every good fighter knows what battles to fight. You have to pick and choose your arguments wisely. Letting the little things slide will work to your advantage. You don’t want to be the boy who cried argument. Make sure the things you are bringing up are significant, instead of just annoyances.

A fight is meaningless if nothing was learned at the end. What makes a fight “good” is the knowledge once it is all over. Hopefully the couple not only learns how to fight better, but also learns what led to the disagreement in the first place. Healthy couples recognize what went wrong and figure out a way to not let it happen again. Amen to that.