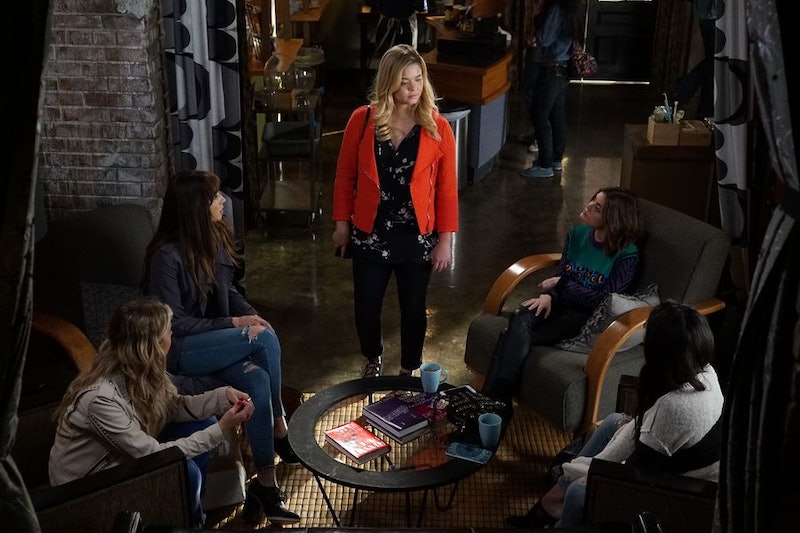 The body count may be continuing to climb in Rosewood, but there's one big difference between the deaths of Dr. Rollins and Charlotte. We know what happened to Rollins, but we still have no clue who killed Charlotte on Pretty Little Liars , which makes almost everyone and anyone a suspect. Obviously, the series plans on leaving us in the lurch with that mystery for quite some time, however, the writers may have just gifted us with a vital clue that begins and ends with Noel Kahn's return to PLL . At first, I thought his big comeback hinted at the theory that he's the new Uber A that's been lurking around, but what if his involvement is much darker than that? Is it possible that Noel Kahn killed Charlotte and has been the person A.D.'s looking for all along?

For me, the timing of Noel's return speaks volumes in and of itself, proving that whatever role he plays in this storyline, it definitely has some sort of important connection to Charlotte's death. He's either trying to avenge what happened to her or attempting to cover up his tracks as A.D. and the Liars edge closer and closer to the truth. The hosts of Bustle's Pretty Little Liars podcast, Taking This One To The Grave, also have some thoughts on Noel's motives, Rollins' fate, and more, which you can listen to below.

Noel has always been a bit of a wild card. In fact, this isn't even the first time he's looked super guilty — like when we thought he was A, but it turned out he was actually helping Alison hide out for her own safety. So he's definitely a difficult character to pin down, but that's what kind of makes him so compelling. You never quite know what he's up to behind that charming (yet mischievous) grin.

We know that Charlotte used to hang out with Noel's brother, Eric, but that doesn't necessarily represent the extent of their relationship. They could've ended up growing close, but when she started seeing Rollins it sent Noel into a jealous rage. Or maybe he wanted to punish her for terrifying his former flame, Jenna Marshall, for all those years and it spiraled into a deadly confrontation. After all, just because these particular relationships haven't taken center stage like Ezria and Haleb, doesn't mean they won't prove to be just as important in the future.

Either way, I think it's safe to say that Noel's return comes with some very sinister motives behind it. He's in town for a reason and odds are that reason has something to do with Charlotte. Let's just hope the Liars don't end up getting in his way because if this theory turns out to be true, they could be in more danger than ever before. And that's really saying something.

For more on Pretty Little Liars, check out additional episodes of Taking This One To The Grave on acast, in the acast app, and on iTunes.

More like this
Everything To Know About The 'Pretty Little Liars' Reboot On HBO Max
By Mary Kate McGrath and Jack Irvin
A New Season Of The Midwich Cuckoos Could Be Coming “To A Town Near You”
By El Hunt
The ‘Love, Victor’ Showrunner Gave Fans Hope For A Possible Spinoff
By Brad Witter
'The Summer I Turned Pretty' Using “Cruel Summer” Has Twitter Begging Taylor Swift To Release A Music Video
By Radhika Menon
Get Even More From Bustle — Sign Up For The Newsletter