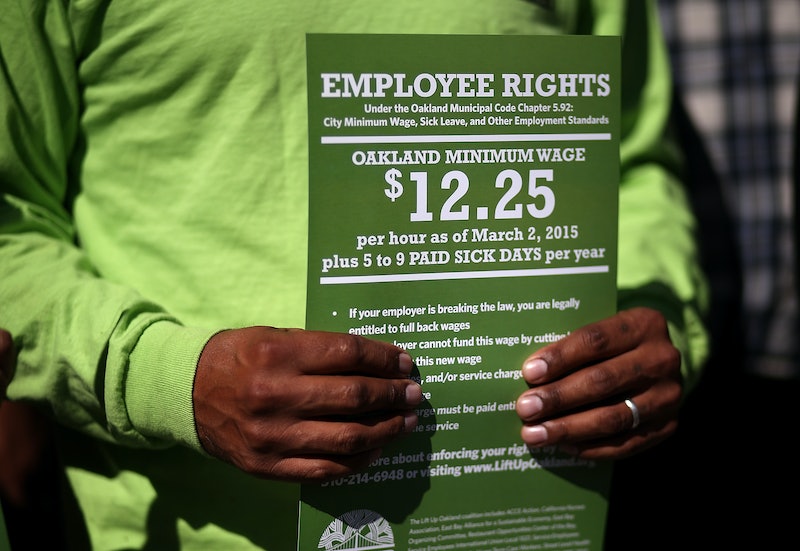 A whole lot of hullabaloo has kicked up over the fact that President Obama plans to raise minimum wage to $10.10. As the bleeding heart liberal that I am, I fall firmly in the camp that believes raising the minimum wage is not only a good thing, but a necessary thing — but just in case there’s any doubt about why, here are some figures to back it up.

Data compiled by the National Low Income Housing Coalition, or NLIHC, shows just how hard — and in a distressingly large amount of cases, impossible — it is to get by on minimum wage. Here’s a map depicting the hourly wage a household must earn, working 40 hours a week, 52 weeks a year, in order to afford Fair Market Rent for a two-bedroom apartment without paying more than 30 percent of their income in each state:

And here’s a map depicting how many hours per week, at 2013’s minimum wage, households in each state would need to work in order to afford Fair Market Rent for a two-bedroom place:

This is sickening. There are 168 hours in a week. In order to afford rent in states like California, New York, Maryland, New Jersey, Hawaii, and Washington D.C., you would literally need to work almost all of those hours — which, until we live in a world like the one in the Nancy Kress novella Beggers in Spain where people are genomed not to need sleep (and it's a dystopia, to boot), is pretty much impossible to do. Humans do need to eat and sleep; that’s just kind of the way we work.

The worst part is that while raising the minimum wage to $10.10 might help a little bit, it’s not going to do nearly enough. Take a look at that first map again. Every single state on it has a necessary minimum wage of at least $12, going up in some places as high as $32. I’m not an economist, so unfortunately I can’t offer any solutions. All I know is that a massive paradigm shift needs to take place in a whole lot of spheres in order to effect the change we need. No one should have to work every single hour in a week to be able to afford a roof over their heads.

More like this
TikTok Has A Genius Old School Hack For Saving Money
By Sophie McEvoy
Twitter Has *A Lot* To Say About The "Single Penalty”
By Sam Ramsden
6 Anti-Police Brutality Organizations You Can Support Right Now
By Syeda Khaula Saad and JR Thorpe
Watch Jacinda Arden’s Devastatingly Honest Resignation Speech
By Sam Ramsden
Get Even More From Bustle — Sign Up For The Newsletter
From hair trends to relationship advice, our daily newsletter has everything you need to sound like a person who’s on TikTok, even if you aren’t.