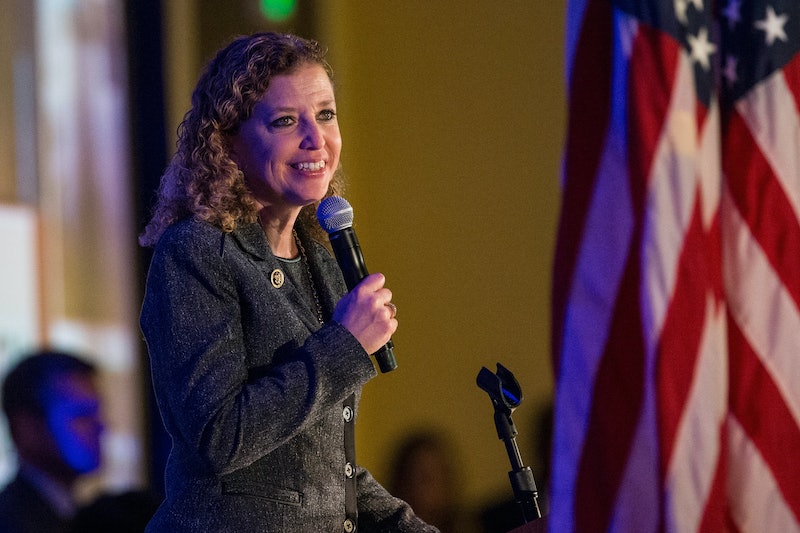 In an unusual turn of events, chair of the Democratic National Committee Debbie Wasserman Schultz won't speak at the Democratic National Convention (DNC) this week in Philadelphia. Party officials made the decision on Saturday ahead of the convention's start on Monday. The last-minute change came as a result of a topic the Democratic Party has had its fair share of experience with: an email scandal. Update: Sunday afternoon, Wasserman Schultz announced that she would resign as DNC chair after the convention ended.

According to CNN, Wasserman Schultz's role at the DNC had been slashed in an effort to "quarantine" her and her impact on the party. She won't call the convention to order at the start of each evening, nor will she get a primetime speaking slot to elaborate on her position as committee chair as planned. Rather, those duties will fall to the newly chosen convention chair, Rep. Marcia Fudge of Ohio. The decision could be a move intended to foster party unity and prevent protests from factions within the party that may oppose Wasserman Schultz.

One faction in particular that the party could be worried about is Vermont Sen. Bernie Sanders' supporters. Throughout his campaign against Hillary Clinton, Sanders reportedly claimed that the Democratic Party's system was rigged and that Wasserman Schultz had found ways to favor Clinton. For her part, Wasserman Schultz denied those claims, telling Fox News in March, "There's just no shred of evidence to suggest that I'm favoring Hillary Clinton ... I could have worked a lot harder at it if that were what I was doing."

Enter Wikileaks. On Friday, the notorious database published some 20,000 emails pertaining to the Democratic National Committee. The emails reportedly came from the accounts of seven committee officials, and they reveal everything from Wasserman Schultz trying to get tickets for Hamilton to committee members potentially trying to undermine Sanders' campaign. In other words, Sanders' complaints about the party and its chairwoman may have been justified.

It's safe to say that the Democratic Party doesn't need any talk of emails at its convention this week. At last week's Republican National Convention in Cleveland, Ohio, references to Clinton and her own email scandal may have surpassed references to the party's very candidate, Donald Trump. If you're wondering what the GOP will use to campaign against Clinton in the general election, don't.

Speaking of the GOP's convention, a divided and protested DNC wouldn't be the most unique thing, considering last week's events in Cleveland. The RNC saw protests over its polarizing nominee outside of the Quicken Loans Arena. Inside, attendees seemed more supportive of Trump — that is, except for Texas Sen. Ted Cruz, who delivered a passionate primetime speech that seemed critical of Trump.

The Democrats' convention will kick off on Monday at the Pennsylvania Convention Center in Philadelphia. Although Wasserman Schultz won't speak, the audience will hear from Sanders, First Lady Michelle Obama, former President Bill Clinton, President Joe Biden, and President Barack Obama, among others. On Thursday, Clinton will formally accept her party's nomination for president.