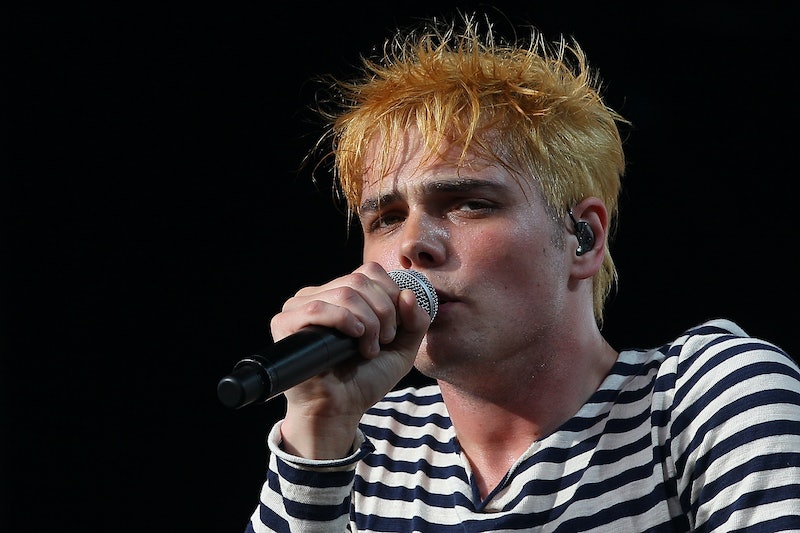 With all the suspicious movement in the My Chemical Romance camp suggesting that the band is planning a tour, we should probably do our part to be prepared for when that happens. Like checking in on what MCR's Gerard Way looks like today, for example? If the band does in fact go on the road, we should probably make an attempt to be able to pick the lead vocalist out of a crowd. It's literally the least we can do. But hey, don't be too hard on yourself if you can't immediately bring Way's face to mind; after all, he was just 24 when he co-founded My Chemical Romance in 2001, and, even though the band technically stayed together until 2013, I lost track of them for a little bit. Now, your boy is 39. I turned around for one second.

But, seriously, faces can chance a lot in that time, not to mention hairstyles; something tells me Way isn't rocking that shock of bright pink hair anymore, but we'll see. Either way, I'm expecting the look to be a little more mature, given that Way married Lyn-Z of the band Mindless Self-Indulgence in 2007, and the two had their first child, a daughter named Bandit Lee, in 2009. But there's a long tradition of rockstars who haven't let becoming a dad change their look, so let's see what we're working with when it comes to Gerard Way in 2016.

Here he is performing at a Guitar Hero Live event in 2015, which are the last official photos we have — at least until the upcoming tour. Like I guessed, he's back to a more natural hair color, although his clothes are proof that he hasn't lost his style.

And then there are also some very cute pics of Way snapped by fans, in which he looks adorable at San Diego Comic Con:

And just out and about a few days before:

It's nice to see Way looking so happy, and I imagine that smile will only get bigger as the MCR reunion approaches. Can't wait to see more of that cute little mug, Gerard Way. We've missed you.