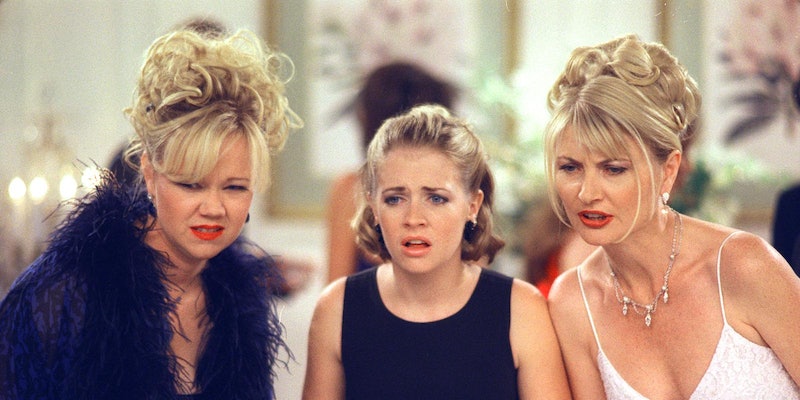 These days we're not exactly in a dearth of finding ways to embarrass ourselves. With "Pokemon Go" on the rise, my commute has basically become a game of human bumper cars, which in turn has created infinite opportunities to accidentally knock an entire week's worth of sanitary napkins out of my front backpack pocket on the subway. (Because you are on the edge of your seat wondering, yes, I did catch that Jigglypuff, and I have no regrets.) My point being — we may learn from our past embarrassments and collectively evolve as humans, but even in the year 2016 we have not yet found a cure for doing face palm-worthy things.

And even if you think you are #blessed and safe from embarrassment now that you're an ~adult~, think again. Just because you don't find your routine embarrassing now doesn't mean that your past self wouldn't be cringing right now. I mean, look at yourself now versus the human you were in the '90s. Would your Tamagotchi-murdering, VHS-watching, double A battery-hoarding '90s self condone half of what you're up to today? For your consideration, here are just a few of the things that your '90s self would be so embarrassed that you do in 2016.

Growing Your Eyebrows To Their Full Glory

In the '90s we had such a vendetta against eyebrows that we weren't satisfied until we'd plucked, waxed, and wept them out of existence. Thankfully in 2016 we let those furry flags fly, y'all.

All your repressed '90s attraction to Professor Oak just spilled out into bizarre fantasies of Professor Willow (played by George Clooney, duh) taking you by the hand hand catching all the Rattatas and Zubats Central Park has to offer. (Help.)

You fought the good fight, but if you are reading this, there is a 100 percent chance you are not married to Leo, despite your '90s schemes.

Ye mighty gods of Lunchables, how can we repent for our sins?!

Not Being Able To Do Kindergarten Math In Your Head

I am personally so reliant on my smart phone that if either number involved in basic addition or subtraction is over 20, the calculator app is open (and "Pokemon Go" is begrudgingly, momentarily closed).

Changing Your Mind About Your Favorite Disney Princess

To be fair, how could '90s you predict the future badassery of Tiana and Elsa and Merida?!

Throwing Away All Your '90s Clothes And Accessories

Your '90s self worked hard to curate that collection of butterfly clips and band t-shirts and capris, and you forsook her decade's worth of struggle for $20 at the neighborhood garage sale in 2003 — destroying not only your past self's dreams, but destroying your present self's chances at owning any '90s dress up parties (of which there are many, #bless us all).

"Oh, I'll totes grow out of this," your naive '90s baby brain thought. Cut to 2016, when you still own your Hogwarts robes that now only go down to your knees and elbows and are unrepentantly weeping at the idea of holding one more chapter of this saga in your hot little hands.

Leaving Your MySpace Online For Future Employers To Find

Complete with Evanescence blaring on the home page and angsty selfies you took with a front-facing camera lens.

For perspective: remember the hullabaloo when Zayn left One Direction? That was the approximate hullabaloo of JT releasing a solo album during the NSYNC hiatus, except without trending Twitter hashtags to funnel our despair. If you'd asked in the '90s whether or not we'd wanted to bring sexy back, our little fangirl hearts would have said OH HELL NO. We knew not what was in store.

I'm guilty AF of this, so let's be real: putting the word "hashtag" in front of something is a passive aggressive person's dream. When someone's annoying you, you're like, "Dude, that's #loud, yo," which somehow seems so much more chill because of the hashtag buffer. Your '90s self, on the other hand, did not mince words, for she was no coward who needed to hide behind her #hashtags.

Having The Most Boring Email Address Ever

The creative integrity you had back when you were ~xodolphinrider9xo~ will never amount to the unforgivable basic-ness of somevariationofyourname@gmail.com. LOOK AT HOW FAST YOU CONFORMED.

Being As Aggressively Nostalgic As You Are About The '90s

Guys, remember when we were actually in the '90s and you got into hair-pulling fights with your sister over whose turn it was on the computer so you could IM your friends, only to have your mom hop on the phone with grandma and wreck everything? Remember how you broke your ankle on platform shoes? Remember how there was glitter everywhere, all the time and always, probably still wedged in your belly button and eardrums after all this time?

And yet, '90s nostalgia is the drug that keeps us from dying. May we honor our '90s selves, despite the deep, deep shame we probs are to them in 2016.