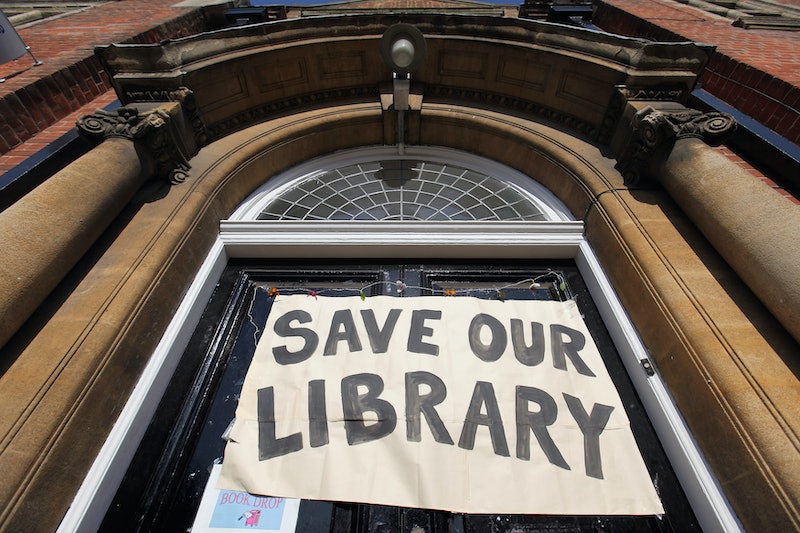 Books are beautiful, amazing things that enrich our lives and make us better — and although book lovers don't need it, there's research to back all that up. Which is what makes the existence of book deserts so tragic. According to a new study, book deserts are very real, but what exactly does it mean to be a book desert? And even more importantly, how can you help eliminate them?

In a study that looked at low income neighborhoods in Los Angeles, Detroit, and Washington D.C., researchers from NYU found that children's books are more scarce in low-income areas — in, in fact, the higher the concentration of poverty, the less likely young people are to have access to books. This phenomenon is referred to as "book deserts," a term derived from "food deserts," which also affect poor neighborhoods.

“Children’s books are hard to come by in high-poverty neighborhoods. These ‘book deserts’ may seriously constrain young children’s opportunities to come to school ready to learn,” Susan B. Neuman, professor of childhood and literacy education at NYU Steinhardt and the study’s lead author, explained in a statement.

This new study, which looks exclusively at low-income neighborhoods, finds that "borderline communities" where poverty is less concentrated and widespread, have on average 16 times as many books per child than high-poverty communities in the same city.

This is obviously a huge problem, given that access to reading materials as a kid is crucial for a variety of reasons, particularly academic success. In fact, it can have an impact on your life for decades.

So what can you do to help kids trapped in book deserts? Here are a few ways.

If you live in an area affected by book deserts, contact your local officials and let them know that library access is something you care about. If people are worried that library branches might close, tell them to vote against any such cuts. If library branches in your city have recently closed, encourage city officials to work on getting them re-opened. Contact whoever runs the public library system in your town or city and ask them what needs to be done to expand library access and how you can help. Because this is a widespread problem, but still fundamentally a local one. So get involved.

2. Donate to Projects That Can Help

There are lots of organizations already working to bring books to kids in low-income areas, but since the whole reason book deserts exist is because you need money to access books, that mean that often times, these groups need funding. Organizations like Soar With Reading, which recently put five book vending machines in Detroit neighborhoods, or First Book, which provides books to children in need, do a lot of great work, and you can help support that by making a donation to the cause.

Little Free Libraries are relatively easy to start, so if you live near an area that doesn't have much access to books, you might want to see if you can team up with anyone in the community to set one up. Or, you can find out if there are already any Little Free Libraries in low-income neighborhoods near you and make a point to regularly donate children's books.

There isn't a lot of political will to put in new libraries nowadays, but if you have a chance to vote for more library funding or to approve measures to put libraries into low-income communities in your city or town, do it. You can also support the development of digital-only libraries, which cost less and take up less space, making them easier for cities to build and maintain, but can be a huge boon to a community none-the-less. You can also encourage your library system to develop a more inclusive approach to ebooks. Because every kid deserves to have books.

More like this
30 Books To Read This AAPI Heritage Month
By K.W. Colyard
What Is Barack Obama’s Net Worth? He Makes *Way* More Now As An Ex-President
By Hugh McIntyre
The 20 Best Audiobooks To Fall Asleep To
By Aoife Hanna and K.W. Colyard
10 Must-Read New Books Out This Week
By K.W. Colyard
Get Even More From Bustle — Sign Up For The Newsletter