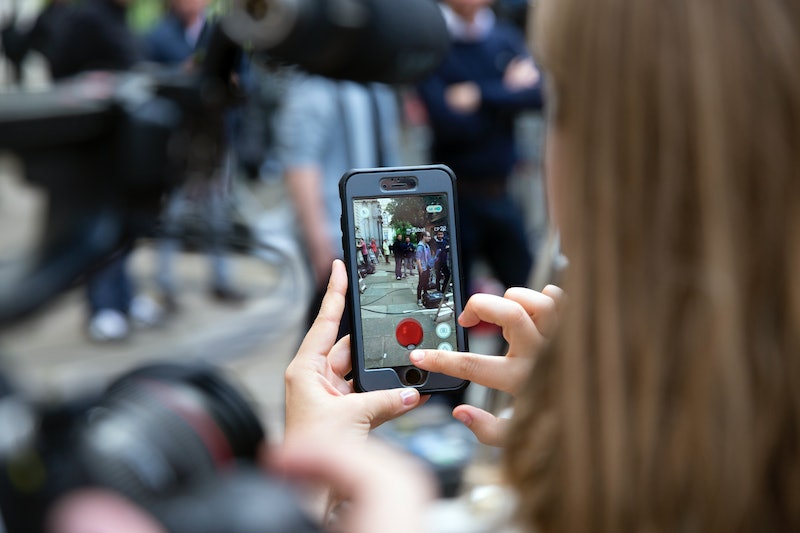 Given the intense fervor surrounding "Pokemon Go" since the augmented reality game was released in early July, it was only a matter of time before some budding Pokemon master really did "catch them all." If you envisioned that person would be you, there's still technically hope — some Pokemon aren't available in the United States so, despite your dreams undoubtedly being dashed last week when Brooklynite Nick Johnson announced he caught them all, no "Pokemon Go" player has actually accomplished that exact feat just yet.

Let me explain. In a show of commitment that, quite frankly, puts my own to shame, Johnson has caught or evolved 142 Pokemon. All this and the man has a full-time job to boot. Can you say "life goals?" But, I digress. While Johnson's accomplishment is undeniably impressive, he didn't actually catch them all. Rather, he caught every Pokemon currently available to catch in North America. As you may well know (and I assume you do if you're a Pokemon fan), there are 151 pocket monsters in the Pokedex that are expected to show up in the "Pokemon Go" app.

If you do the math, this would suggest that there are nine Pokemon still unaccounted for. So, uh, where are the little guys? And, more to the point, can you catch them? The good news is that the following elusive Pokemon do exist and, as far as we can tell, you can even catch some of them if you're really persistent or, you know, have a Passport.

This legendary flying Pokemon can control ice. Ever wonder where snow comes from? According to Pokemon lore, the flapping of Articuno's wings chills the air so much that snow falls when it flies. No word yet on when or where this creature will show up in the "Pokemon Go" wild.

Just think of Ditto as your friendly neighborhood blob in the "Pokemon Go" world — it rearranges its cell structure to morph into other shapes. Ditto has a comically bad memory and tends to get the details wrong if it tries to transform itself based on memory alone. Like Articuno, we have no idea where this little guy exists or when you might find him.

This cute little duck-like Pokemon is always seen with a stalk from a plant of some sort. Since some stalks are apparently better than others, Farfetch'd has been known to squabble with others over stalks. It reportedly can be found in the wild, but apparently only in Asia.

Kangaskhan is kind of like what you might expect if a kangaroo and King Koopa from the Mario series procreated. Word to the wise about these guys — if you come across a young one, do not engage. Their parent is sure to be nearby, and adult Kangaskhans don't take kindly to having their offspring kidnapped. Plus, if you hope to catch sight of this Pokemon at all, you're apparently going to have to head to Australia.

Here's an interesting one. Mew is said to be an amalgamation of all the others, as in it possesses the genetic composition of every Pokemon. It may be incredibly hard to catch, too, considering it can make itself invisible at will. He's rumored to exist, but we don't know where he might be.

Like Mew, Mewtwo is a genetic manipulation. Unfortunately, the humans who created this Pokemon forgot to give it a compassionate heart. As you imagine, it is probably more than a little prickly in personality. We're still waiting to find out where Mewtwo might be.

This legendary bird Pokemon can control fire. Pretty cool, huh? Even cooler? If Moltres is injured, it can supposedly dip its body in the molten magma of a volcano to simultaneously burn and heal itself. It's the symbol of Team Valor, but no one has caught it yet.

A master of pantomime, Mr. Mime gestures and motions to watchers to convince them that something unseeable actually exists. Once the watchers are sufficiently convinced, the unseeable thing actually exists as though real. If seeing truly is believing, you're going to have to hop a flight to Europe to find this particular Pokemon.

Another legendary bird Pokemon, Zapdos can control electricity and typically lives in thunderclouds. Getting struck by lightning is a good thing for this critter, who gains power from lightning bolts. No one has spotted it in "Pokemon Go" yet, but it wouldn't be a bad idea to keep an eye out during stormy weather.

More like this
Hayden Panettiere Will Return For 'Scream 6': "We F*cking Won, Scream Fam"
By Jack Irvin and Jake Viswanath
5 Mini Skirt Outfits To Wear, Inspired By These Brave Souls
By Avery Matera
Meet The Disney Imagineer Bringing 'Guardians Of The Galaxy' To Epcot
By Charlie Mock
Starbucks’ Chocolate Cream Cold Brew Tastes Like This Retro Candy
By Emma Garza
Get Even More From Bustle — Sign Up For The Newsletter