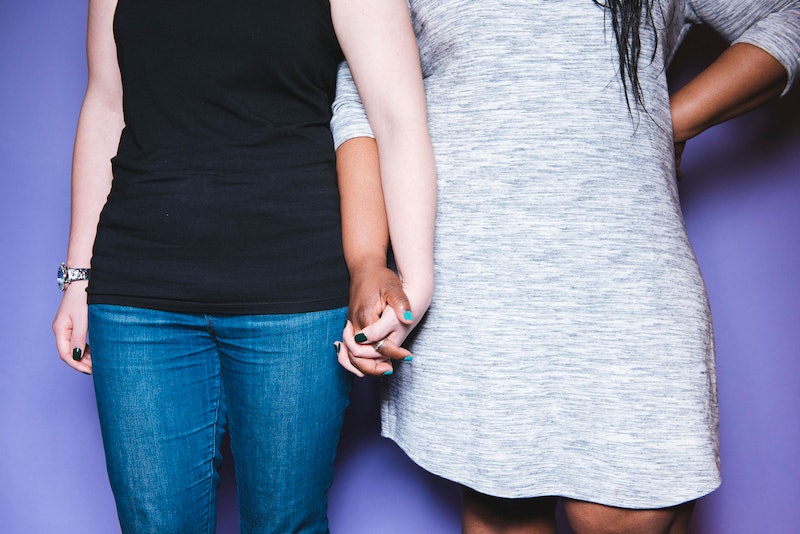 One of the greatest gifts feminism gives us is the ability to achieve equality in our own relationships, and the groundwork for establishing that equality has to be set from the beginning. The things a feminist does early in a relationship will impact how they're treated throughout that relationship, as well as afterward. So, when you first start dating someone, it's worth making a conscious effort to ensure that your partner is respectful and shares your values.

Unfortunately, relationships — especially heterosexual ones — are often sites where gender inequality manifests. From traditional arrangements where men are expected to support women financially to symptoms of rape culture like "playing hard to get," we hear some of the most effed up ideas about gender in the form of dating conventions. But the good news is that this really is changing. I'm grateful to be living in a time where, for everyone on OKCupid who sends me an angry rant after seeing the word "feminism" on my profile, there are at least as many who think it's cool and use it as a conversation starter. More than ever, women and gender-nonconforming people know they have the right to be equals in the eyes of their partners, and the world. And they do what's necessary to ensure that this happens.

Here are some things that feminists can do during the first year or so of dating someone new to make their relationship an equal one.

1. They Reciprocate Their Partners' Efforts

Since our biggest goal is equality, feminists care about making sure both partners are putting equal effort into a relationship, even if this isn't what "tradition" might dictate. For example, a feminist woman dating a man who has paid for the first date will offer to foot the bill on the second if she can. A feminist man whose date has cooked for him will offer to clean up the dishes. Nor is this same principle of reciprocity limited to heterosexual relationships; no matter what the relationship's orientation might be, it always applies.

2. They Place Their Focus Elsewhere Regularly

One right women have fought hard for is to have lives independent of their relationships and families, and feminists make sure to take full advantage of this right by maintaining their work, social lives, and hobbies. It's easy to get swept up in infatuation early in a relationship, so it's sometimes a conscious effort to stay disciplined and tell our partners we need to get more done before we can talk or turn down a date to throw ourselves into a work assignment. It's worth it, though; how a partner responds to situations like this is a good measure of whether they will respect our careers and other areas of our lives. It also sets the foundation for a relationship where both people have the space to be who they want to be.

It often feels like it's necessary to "come out" as a feminist early in a relationship. Due to all the negative stereotypes about feminism, it's easy to get wary that the people you date may not support your involvement in the movement. That's all the more reason to talk about it, though. A feminist will bring up feminism and current events related to it during the first few dates to make sure their date is a feminist — or at least someone who's on board with feminist values, whether they identify that way or not.

4. They Talk About Boundaries And Consent

Talking about sex is uncomfortable for many people, but so necessary for feminists or anyone looking for a respectful relationship. Before a feminist becomes sexually active with someone, they may want to talk to them about how they define consent, where their boundaries are, and any history of having those boundaries violated. That way, both people will understand that consent is necessary for every sexual interaction and guessing is not enough — everything needs to be communicated in advance, and anyone can change their mind about something at any time.

5. They Discuss Sexual Likes And Dislikes

Since a lot of the sex we see in mainstream porn and the media neglects the pleasure of people other than cis men, it can be very empowering for people of other identities to talk about what turns them on and gets them off. Too often, women and gender-nonconforming people are afraid of taking up time and attention, but a feminist partner will want to give at least as much as they're getting. And talking about what both of you want sets the stage for a sex life where you both feel comfortable and assured that your preferences will be taken into consideration, which can allow you to relax and enjoy yourselves more.

6. They Talk About Gender Roles

Notice a theme here? Feminists like to discuss things. And another thing we like to discuss is how we feel about gender roles. In order to feel comfortable in a relationship, we need to be assured that we won't be expected to conform to our gender's prescribed role. But we also may have complicated relationships with gender roles. For example, a feminist woman may enjoy having bills footed and doors opened for her, and that's fine — she just needs to know her partner doesn't view this as a sign of submissiveness. However we perform our genders, we just need to know we're free to do so as we wish and that it won't be misinterpreted.

Different couples split expenses differently, and it doesn't necessarily have to be 100 percent even in order for a relationship to be feminist. But the arrangement does have to be 100 percent consensual. That means nobody feels pressured to spend or receive money because of their partner. It also means the relationship feels equitable, whether that means both people are putting in the same amount of money or one person is paying more but the other is contributing in other ways.

8. They Decide What They Want Out Of The Relationship

The other great thing about feminism is that it gives us the chance to determine what we want out of a relationship, not what's been prescribed for us. If we don't want to be monogamous or get married or have kids, we don't have to. We just need to know our partners share our goals before moving forward with a relationship. As with everything, talking about it is key — openly, honestly, and respectfully.

More like this
14 Underrated Date Ideas To Try With Your Partner
By Lexi Inks
Bumble's "Compliments" Feature Lets You Message Before You Match
By Lexi Inks
The Best Positions For 6 Common Sexual Issues
By Lexi Inks
Are Capricorn & Aquarius Compatible In A Relationship? Astrologers Weigh In
By Kristine Fellizar
Get Even More From Bustle — Sign Up For The Newsletter