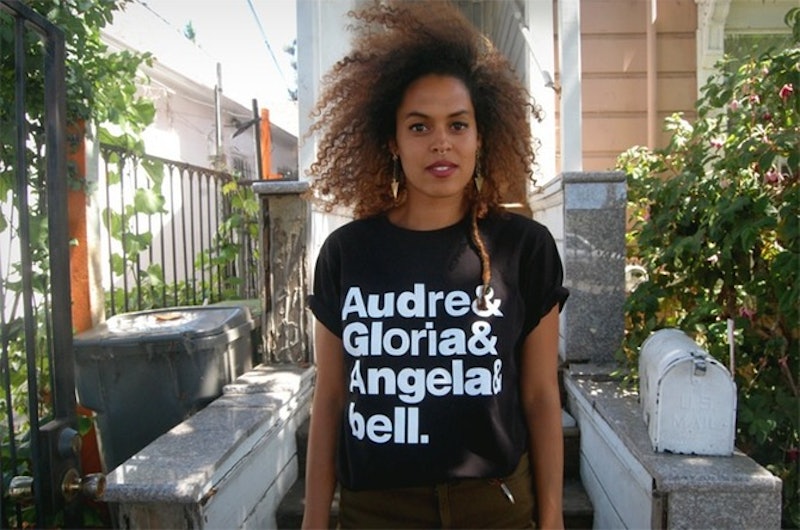 If I had a nickel for every time I've heard someone say, "I don't really consider myself a feminist, but ... " I'd have a hell of a lot of nickels. As an unapologetic feminist, it really bugs me when people are wary of calling themselves feminists. But what bugs me even more than hearing someone say they don't "identify as feminist," is hearing them say this whenever so many things about them prove they are feminists even though they think they're not.

It seems as though "feminist" is still considered a dirty word by a lot of people — even people who are feminists without realizing it — and while I find this utterly ridiculous, I can also understand why it's still happening. When you're conditioned to associate the word "feminist" with man-hating and anger, (as so many people are) then of course you would be wary of calling yourself a feminist. But feminists don't hate men, we're not angry all of the time, and calling ourselves "feminists" is simply a way to publicly identify ourselves as people who believe in the political, economical, and social equality of the sexes. That's it.

That said, it's important to note that there are reasons some people don't identify as feminists. Sadly, the feminist movement has a history of excluding women of color and marginalizing their struggles, despite the fact that some of history's most compelling feminists — like Alice Walker and Audre Lorde — are women of color. The mainstream feminist movement has only recently started to acknowledge the importance of talking about how gender inequality and racial inequality intersect. Because of this, many women of color still don't feel comfortable identifying as feminists, and may identify with other labels, like womanist, instead. While I can't say I blame them, it makes very sad, because feminism should to be for everyone.

The bottom line is that everyone has a right to identify as they please; what I'm talking about here is the denial of the feminist label for superficial reasons, rather than a thought-out ideology.

1. You Think The Wage Gap Is Seriously Messed Up

If you think it's wrong and stupid that women still don't receive equal pay for equal work, then you're a feminist, and you should know that it's nothing to be ashamed of. Wanting the wage gap to become a thing of the past means you're a decent person and a supporter of equality. If the wage gap didn't bug you, then you would be a jerk — but since you want women to be paid the same amount as their male coworkers for the exact same jobs, then you're a feminist. Kudos for not being an a** hole, and welcome to feminism.

2. You Would Like To See A Woman Be President One Day

Even if you don't really want that woman to be Hilary Clinton, if you would like to see a woman become president of the U.S. someday, then you're a feminist. Voting for a woman to lead the United States of America is simply not something a non-feminist would do. Quit fighting it!

3. You Think A Woman's Body Should Be Her Own Business

Believing that women should wear whatever the hell they want, have total bodily autonomy, and full access to both their reproductive rights and reproductive healthcare, is both a human rights issue and a feminist issue. If you believe a woman's body, and what she decides to do with it, is 100 percent her business, that's just one more way you're proving that you are actually a feminist. Welcome, friend!

4. The State Of Women's Rights Globally Upsets You

Whether you identify as feminist or not, the state of women's rights globally should upset you, because the fact is, basic, human rights are being denied to thousands of women worldwide. Additionally, many women in developing nations are being physically harmed, and sometimes killed, when they do try to fight for their basic rights — such as the right to an education.

If the state of global, women's rights upsets you, congratulations — you're not a total sociopath. And, also, you are a feminist.

5. You Admire Strong Women & You Enjoy Being Around Them

A lot of people seem to have trouble answering to female bosses or just being around strong, assertive, women in general. But if you, like myself, actually prefer female bosses, and you feel energized and inspired after being around strong women — then you're a feminist. There is nothing more feminist than when you allow yourself to be encouraged by other women instead of being threatened by them. If this sounds like you, then stop saying you're, "not really a feminist." Because, darling, you most definitely are.

I know everyone has different ideas about sex and sexual behavior, and that's OK. We don't all have to like the same things in bed or be super open about our sex lives. But if openly sexual women don't make you uncomfortable, regardless of your own personal feelings on sex and sexuality, then you're super feminist — whether you want to admit it or not.

Trust me, being OK with women who are blatantly sexual is not something you could do if you weren't a feminist, and it's a truly awesome way to be. So be proud of yourself, keep it up, and maybe start calling yourself a feminist already.

7. You Speak Your Mind

Whether it's at work, in bed, or just when you're chilling with you're friends, if you aren't afraid to speak your mind or ask for what you want, then you're thinking and acting like a feminist — and that's fantastic. So stop pretending you're not a feminist. Because if you have the gumption to speak your mind, then you are a feminist, and you should be proud of yourself for it.

More like this
Beyoncé & Madonna’s “Break My Soul” Remix Honors A Group Of Black Icons
By Stephanie Topacio Long
22 Movies On Netflix That Are Perfect For The Whole Family
By Bustle Editors
You're Making Your Home Look Sh*tty If You're Doing Any Of These 40 Things
By Mackenzie Edwards
Your Daily Horoscope August 11, 2022
By Mecca Woods
Get Even More From Bustle — Sign Up For The Newsletter