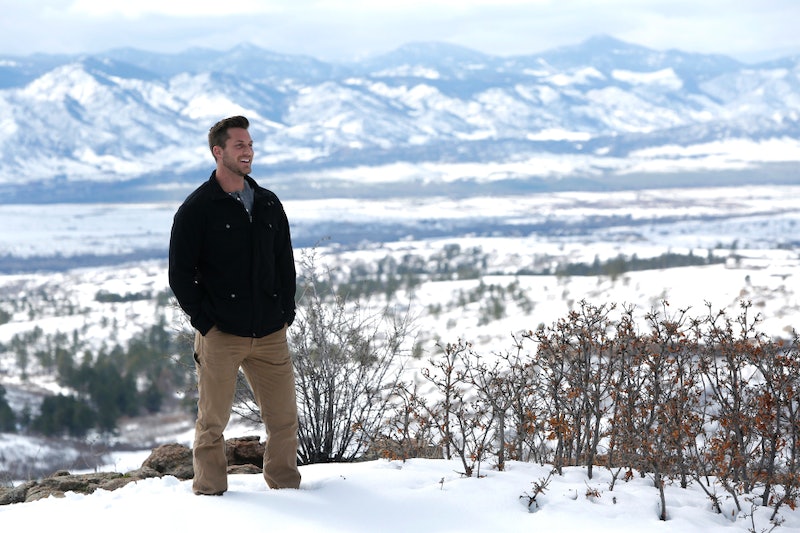 Only a few guys remain on JoJo Fletcher's season of The Bachelorette , and while she clearly has a special connection with all of them, only one man will be left standing (or rather kneeling) by the end of this journey for love. But who will it be: Luke, Jordan, Robby, or Chase? We'll know the answer soon enough, but in the meantime, it doesn't hurt to do a little digging and see who looks like they're still flying solo after the show. Take Chase, for example. Is Chase still single after The Bachelorette ? If his Instagram account is any indication, this Bach suitor is currently on the market.

Granted, it's not like Chase would be able to post anything that implicated he and JoJo were together even if they were, considering that would kinda give everything away and make the finale a whole lot less exciting. However, a majority of his pictures are either promoting his time on The Bachelorette or showing him out on various adventures all by himself. Sure, you could argue that JoJo is the one taking the pictures so as not to reveal herself before she should, but I highly doubt that is the case for this particular duo.

As much chemistry as JoJo and Chase have together, it's easy to see that she definitely has stronger feelings for some over others. (I see you, Jordan Rodgers.) So as great of a guy as he is, it feels very unlikely that they'll have a future together. The good news is, though, that there doesn't seem to be any animosity between the two of them. In fact, Chase is constantly posting photos and videos with captions stating how great he thinks JoJo is, offering up even further proof of what a catch he really is.

Granted, all of his fellow competitors appear to be doing the same kind of thing and keeping their current private lives pretty close to their chiseled chests. But the truth is that they might all still be licking their wounds from heartache and aren't looking to find someone else to fill that void JoJo left behind... well, not immediately anyway. Chase has admitted how difficult it is for him to open up about his feelings, so if/when JoJo sends him packing it's going to crush him. Odds are, he'll need some time to recover before jumping into the dating scene again. So unless The Bachelorette finale surprises us all and sees JoJo accepting a proposal from Chase, consider this suitor as probably available.