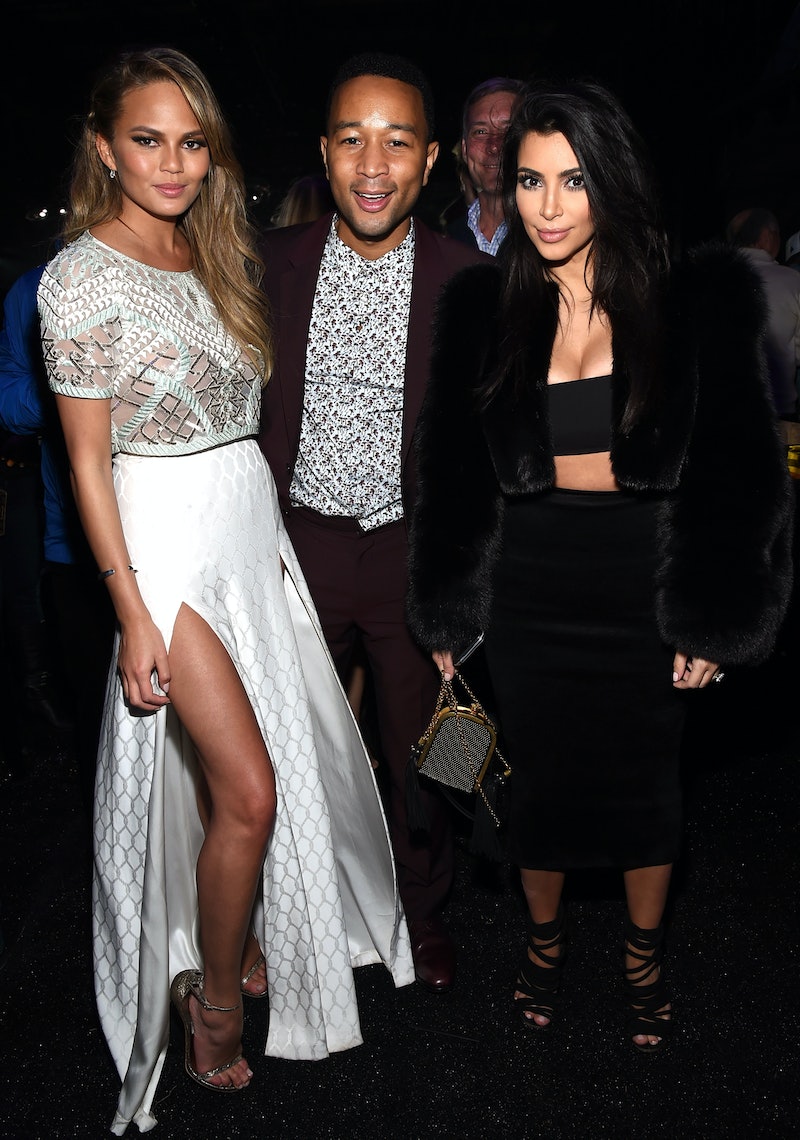 When it comes to celebrity friendships, sometimes they feel forced or fake. But that's not the case for Chrissy Teigen and Kim Kardashian, who have thrown each other baby showers and bonded over eating churros. So, how did Teigen and Kardashian meet anyway? In a new video on Kim K's app, the pair recounts the story of how they were first introduced. Spoiler alert: It has nothing to do with their famous musician husbands, John Legend and Kanye West. Instead, they met in a surprisingly common location — the bathroom at a place called STKA. It's not the most glamorous story, but it is pretty fantastic. According to E! News, Teigen recalled in the video,

"I remember this because I was so nervous to meet you. I don't know. I'd been watching. I knew all about you. I felt kind of like a weirdo... You made me feel so much better because we went to the bathroom and you had me zip you up. [I was like] 'Oh my gosh! She has spanx on. She's cool. She's normal.' Yeah I remember that pretty well for some reason."

At the time, Kardashian was still dating Reggie Bush, so he was there too. I love how Teigen appreciated the fact that Kim K was wearing Spanx. Sure, the reality star usually looks flawless, but it's comforting that she has a little extra help — and there's no shame in that. If anything, it makes her more relatable. According to E!, they met six years ago and surely they've come a long way since then. Even though their husbands aren't the ones who introduced them, they do love a good double date together — like the time they all hit up the Waffle House.

From marriage to motherhood, their friendship has survived all the major milestones. Teigen and Legend attended Kimye's wedding, which definitely was an exclusive event to snag an invite to. And recently, they starred in Fergie's "M.I.L.F. $" video together. In fact, it was because of Kardashian that Teigen chose to participate in the first place. And when it comes to motherhood, she also led the way in that respect too. Teigen revealed on Kim's app, "Everyone knows this. You helped us find the doctor for IVF and a lot of the same things... You taught me everything."

Who knew a trip to the toilet could transform into such a beautiful friendship? The lesson here: If a fellow bathroom-goer asks you to zip up their dress, always say yes. You may have found your new BFF.