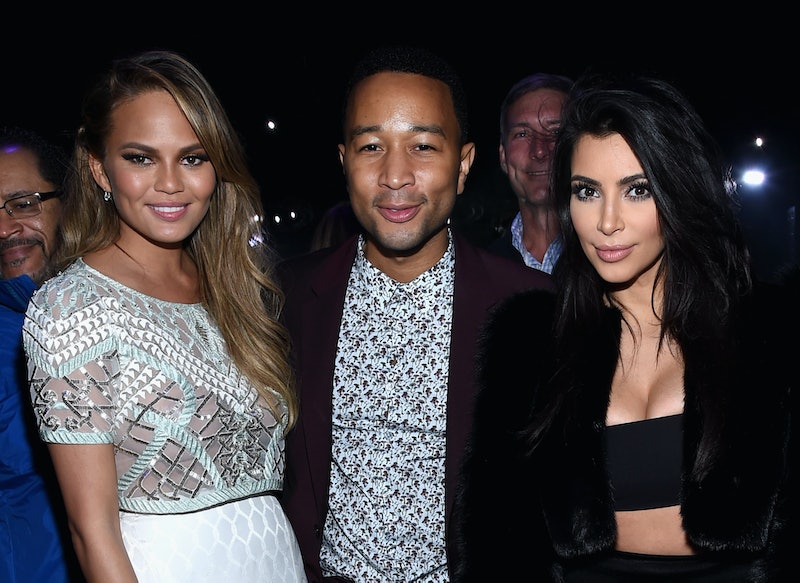 When you really think about it, Chrissy Teigen and Kim Kardashian have plenty in common. They've modeled on numerous magazine covers and they're both married to Grammy Award-winning artists. Plus, they're known for being outspoken and perfectly sassy on Twitter. Still, I was quite surprised to find out these two are friends. Only because it had never crossed my mind before. Proving their hilariously great bond, the two talked about parenting on Twitter early Monday morning. Mom-to-be Teigen joked about dreading waking up early for feedings after seeing Kardashian's tweets about Saint West. Kardashian responded,

Teigen, who apparently is an avid Kimoji user, also noted her disappointment about the lack of churro emojis — something both women have vocalized having pregnancy cravings for in the past. She wrote, "I am furiously looking for a churro kimoji! How is there no churro!" Honestly, these two should totally start a Mommy Support Group, where they can sit around, eat churros, and swap parenting tips. That sounds like the dream.

Since I'm loving the fact that these two are friends, let's look back at other moments that highlight their bond. From taking selfies at the VMAs to double-dating at the Waffle House, here's hoping there's plenty more hangouts between these two.

Basically, Kardashian gives Teigen a major dose of reality, as far as what to expect with a newborn. Plus, in an interview with InStyle, Teigen revealed that Kardashian passed on maternity style tips. She said,

She told me to go stretchy. I always wanted to be the person who showed off the bump because it looks beautiful and I think you should embrace it. Kim does that well and I love seeing that belly of hers and I know Kanye does too — we’re lucky to be with men who find pregnancy sexy.

See? That's another thing these two have in common.

When these two hang out, it's selfie central. And why not? There's nothing wrong with taking photos of yourself and, as Kardashian would say, "feeling your look."

The VMAs wasn't the only time that these two sat by each other. During the 2015 Grammys, these two took even more selfies, including a reaction to Beck winning an award. This was mistakenly viewed as a diss for his Best Album trophy, but Legend later clarified they were just making funny faces and enjoying the show.

Although there's no photos of them together, Teigen attended Kris Jenner's Gatsby themed 60th birthday party. It's safe to assume that she and Kardashian hung out that night. Plus, it's great to see she's close with the family. She previously hung out with Kourtney Kardashian too, so the family bond goes deep.

Here's the double date to end all double dates. Because really, what's better than good friends and good waffles?

Once Teigen gives birth, I hope there are future playdates between the baby and Saint West. Now that would be the cutest.