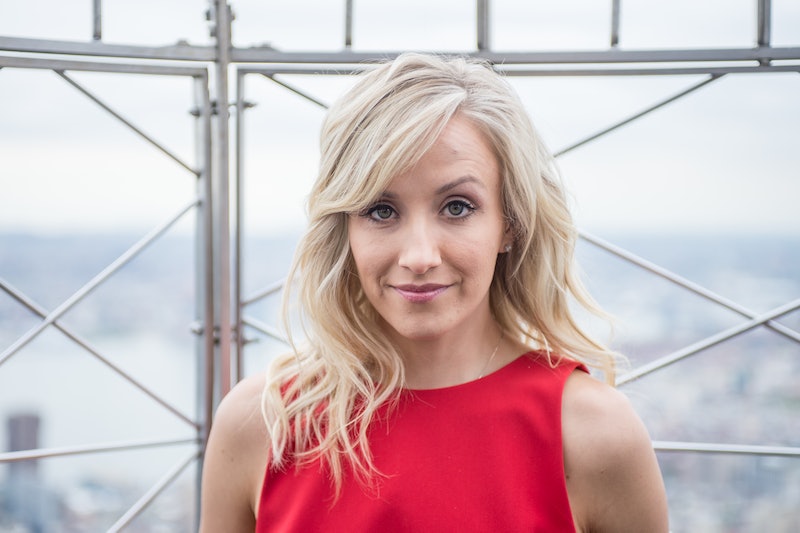 The hype surrounding the U.S. Gymnastics Team is growing more intense by the second with the start of the 2016 Olympics rapidly approaching. The Gymnastics Team proves every four years that it's the epitome of #GirlPower through inspiring teamwork and numerous wins. But, what happens to these amazing gymnasts after the games end?

In 2008, Nastia Liukin was an incredible asset to Team U.S.A. in the Beijing Summer Games where she became the third woman in U.S. history to win the Olympic all-around title. So, where is Nastia Liukin now? The gymnast may not be competing any longer, but her relationship with the Summer Olympics is far from over. (Bustle has reached out to Liukin's team for comment and will update accordingly).

Liukin was only 18 when she led the U.S. Gymnastics Team to a silver medal in Beijing. Liukin's parents Valeri and Anna were both champion gymnasts in their native country, Russia. Her father, Valeri Liukin, was even her gymnastics trainer. So, it's no surprise that Liukin hasn't parted with the gymnastics world since retiring from the sport in 2012.

Along with her gold for the individual all-around, she also won silver medals on the balance beam and uneven bars and a bronze medal on floor. But, even though she's no longer competing, don't think for a second that she's peaked. Now, at 26, the Olympian is keeping busy with different campaigns, projects, and even a new career.

1. She Stayed Connected To Sports

Since winning five medals in Beijing, Liukin has remained linked to the sport with the launch of her line of leotards with GK Elite and her partnership with Coca-Cola in the brand's #ThatsGold campaign for the Rio 2016 Olympic Games.

2. She Graduated From College

The gymnast has also been busy pursuing other interests as well. In May 2016, Liukin graduated from NYU with a degree in sports management.

Like many college students, she got involved in some extracurriculars – the Olympian competed on a little show called Dancing With The Stars and made it all the way to the semifinals.

Liukin is ready to go back to her roots. She'll be heading to the Rio Olympics this August as a gymnastics commentator for NBC. In an interview with PEOPLE, Liukin discusses her excitement over her future as an Olympics analyst and how she has been preparing for the job.

I've been keeping track of all the gymnasts in the competitions leading up. I've gotten to know the gymnasts, their start values and their routines... It's a little challenging, though, because when I'm commentating I have to remain neutral and I'm still friends with these girls, so that's hard for me!

She was also enthusiastic about this year's Gymnastics Team when she spoke to the magazine. She said, "It's going to be a great Olympics because you most likely have one of the strongest athletes in history competing, Simone Biles." It's so wonderful to see a gymnastics legend like Liukin supporting the newest generation of gymnasts. #GirlPower indeed.

Liukin is also very committed to supporting young gymnasts. She's currently working on a new project called Grander with her 2008 teammate, Shawn Johnson. In a post on her Instagram, Liukin explains the importance of mentors for young gymnasts and discusses what Grander hopes to achieve.

We are REALLY excited to be a part of a new project called Grander. We are creating a community of motivated gymnasts that will get to connect with us in a way we’ve NEVER done before. Our goal is to help you achieve your own goals. We want to help you be grander. We want to inspire YOU!

In order to participate in the project, post a photo or video to Instagram about what you're inspired to do. Make sure you follow @begrander on Instagram to be eligible as well as tag the account in the post along with #InspiredTo. According to Liukin, only a limited number of people will gain access to the Grander account, but those lucky few will get "awesome gifts, and be the first to learn about some more exciting news!"

It's definitely nice to see that Liukin has been encouraging and supporting young gymnasts, and even though we won't see her on the balance beam any time soon, her new roles as both an Olympics analyst and gymnastics mentor will surely be just as inspiring.

More like this
Rihanna & A$AP Rocky’s Astrological Compatibility Proves They'll Be Amazing Parents
By Nina Kahn
Jake Daniels Just Became The UK’s First Active Football Player To Come Out As Gay Since 1990
By Sam Ramsden
What Is Jeanie Buss' Net Worth? The Lakers President Is Uber Rich
By Hugh McIntyre
The Sun Tarot Card Meaning, Explained
By Brittany Beringer
Get Even More From Bustle — Sign Up For The Newsletter