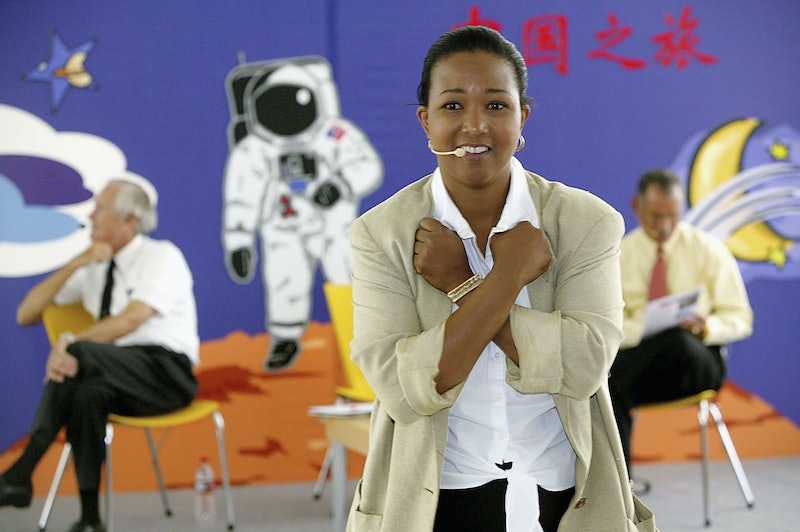 The real-life ratio of women to men in STEM careers is steadily rising, but little girls sadly aren't accustomed to seeing this fact reflected in the toys they play with. But if science writer Maia Weinstock has her way, a new LEGO set will soon start to redress that gender imbalance: The proposed "Women of NASA" LEGO set honors five of NASA's most notable women — Margaret Hamilton, Katherine Johnson, Nancy Grace Roman, Mae Jemison, and Sally Ride — and it's a much-needed addition to the LEGO pantheon.

While this new set wouldn't mark the first female characters to join the LEGO universe, they would be part of a very small and select group of non-male LEGO characters who have careers or skills outside of those traditionally coded as "feminine." (Not that there's anything wrong with having a career or skills coded as "feminine"; the problem, as always, arises when there are no other options but those ones.) Weinstock's proposal comes by way of LEGO Ideas, a program that allows anyone to "create an awesome model, take great photos, and write a convincing project description" in order to qualify their minifigs for the LEGO Review Board and — fingers crossed — acceptance as an official set.

Although LEGOs have historically been marketed as gender-neutral toys — the classic 1981 LEGO ad featuring a little girl and her magnificent creation remains one of the best toy ads ever made — their iconic blocky minifig characters frequently read as being "for boys." As recently as 2011, 90 percent of the company's consumers were male, despite the fact that countless little girls also grew up playing with little plastic bricks. In 2012, the company introduced the girl-focused Friends line among their minifigs which, despite being a huge hit for LEGO, was criticized for unnecessarily gendering the toys. The most notable critic, perhaps, was a 7-year-old girl named Charlotte, who took Lego to task for this gender inequality. In a letter she wrote to the company in 2014, she expressed disappointment with the failure to offer "LEGO girls" whose hobbies include more than "sitting at home and shopping."

Soon after, however, the company approved a minifig set called the "Research Institute" featuring a woman chemist, a woman astronomer, and a woman paleontologist. It was a big step forward both for LEGO and for toys in general — but there was just one problem with the set, which was also originally proposed as a part of the LEGO Ideas program: It was extremely short-lived. Met with overwhelming excitement after being released, the "Research Institute" sold out quickly online and wasn't offered in most brick-and-mortar LEGO stores.

Enter Weinstock's proposed set of NASA minifigs, which "celebrates five notable NASA pioneers and provides an educational building experience to help young ones and adults alike learn about the history of women in STEM." As of right now, the proposed set has 3426 supporters with 539 days to go. If it reaches 10,000, it will officially be considered for adoption into LEGO's roster of existing minifigs. It's also worth noting that, of the 165 glowing comments about the proposed set, many are men praising the idea and expressing their excitement over having LEGO characters like this for their own daughters. Hooray for humanity!

Should the set make it all the way into production, here are the five badass figures who'll be immortalized in Lego form.

The director of the Software Engineering Division of the MIT Instrumentation Laboratory, Hamilton was under contract with NASA during the '60s. She is best known for developing the on-board flight software used during the Apollo missions to the moon.

A physicist, space scientist and mathematician, Johnson was a longtime researcher for NASA. She contributed to the American aeronautics and space programs through the early application of digital electronic computers at NASA and, most notably, exhibited unparalleled accuracy in computerized celestial navigation when calculating the trajectory for the Mercury and Apollo programs.

You may know Roman by another name: "Mother of Hubble." Such was the nickname this astronomer — one of the first female executives at NASA — was given for her role in planning the Hubble Space Telescope. An impassioned advocate for women in STEM, Roman also developed NASA's astronomy research program.

This astronaut and physician (yes, a trained doctor and astronaut!) became the very first African-American women in space when she went into orbit aboard 1992's space shuttle Endeavour. After retiring from NASA, she became an entrepreneur to boot by establishing a company that researches the application of technology in daily life and encourages students in the sciences. She has a whopping nine honorary doctorates.

Arguably the most recognizable name on this list, Ride was an astronaut, physicist, and educator. After answering an ad in the Stanford newspaper seeking applicants for the space program, Ride was chosen and, in 1983, became the first American woman in space. At only 32, she was also (and remains) the youngest American astronaut to have traveled to space. After retiring as a NASA astronaut in 1987, she founded an educational company to encourage children — especially girls — to pursue the sciences.

More like this
10 Organizations To Support On Latinx Women's Equal Pay Day
By Caroline Burke and Mia Mercado
Discord Might Be A Twitter Alternative — Here’s How To Use It
By Alexis Morillo
Dyson Is Dropping Futuristic, Air-Purifying Headphones
By Rachel Lapidos
This AI Filter Shows How You’d Look In Different Time Periods
By Alexis Morillo
Get Even More From Bustle — Sign Up For The Newsletter