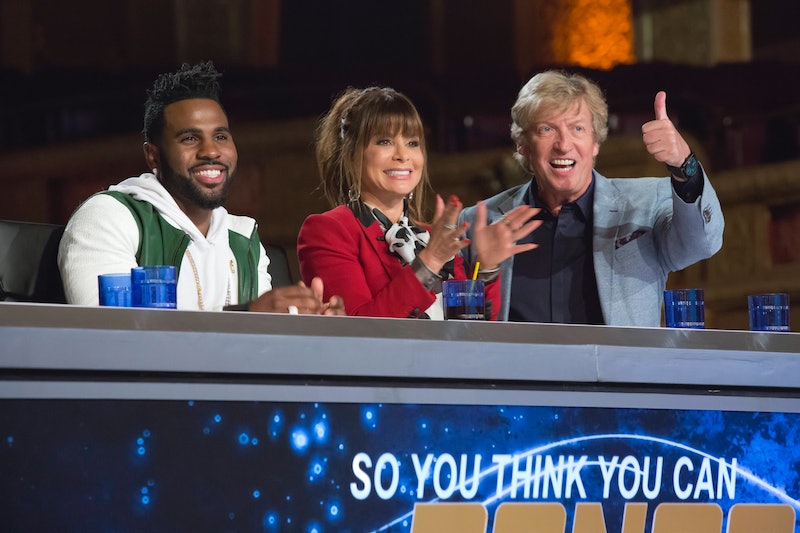 While you wouldn't think that romance would be a component of So You Think You Can Dance this season since the dancers are between ages 8 and 14, the July 25 The Next Generation episode changed that when Jason Derulo asked out Jenna Johnson, an All-Star who, like Jason, is a full-grown adult. He might not have technically asked her out, but the judge definitely made his interest in Jenna known, which was very inappropriate and made the moment uncomfortable for the dancer.

After Jenna and Jake's amazing ballroom routine (how I adore this child), Jake was complimented by all the judges, but Jenna (who according to the SYTYCD wiki is 22 years old) inspired some praise as well. Yet, no judge gave Jenna as much attention as Jason and though he acknowledged that the series isn't about her this season, he apparently couldn't help himself when he told her how she "looked amazing." He followed that up with, "I don't know if you're involved ... " before trailing off and mumbling some phrases that sounded like "just saying" and "throwing it out there." While you could write it off as lighthearted flirting, making the focus after her performance with Jake on her attractiveness was a completely unprofessional move by the judge.

Jenna was understandably embarrassed by this surprising declaration from the famous singer and, of course, host Cat Deeley had to acknowledge the moment, which kind of only made it worse. Even with a number of couples emerging from So You Think You Can Dance, I honestly don't really expect a coupling to come out of Jason's comments because of how uncomfortable Jenna looked. For a show focused on kids dancing, his flirting came out of nowhere and also placed Jenna in a totally awkward position.

Most — if not all — of the commentary from the judges should have been focused on Jake's performance, and while praising Jenna's own dancing skills would certainly have been warranted, commenting on her looks and objectifying her was not. Jenna has done a tremendous job of being a mentor to her Next Generation dancer and if she receives attention for anything, it should be that. She didn't deserve to be made to feel uneasy on live television like that — especially by one of the judges.