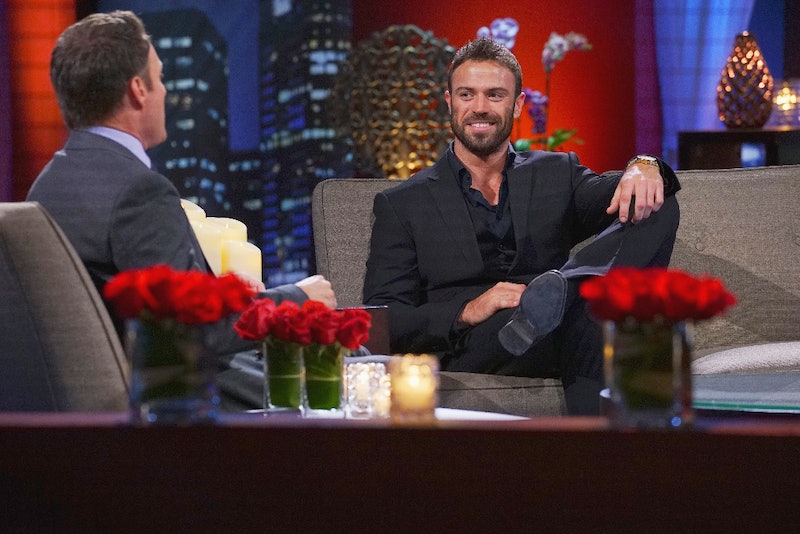 If you thought the drama surrounding Bachelorette contestant Chad Johnson was over, think again. The best episode of the year happened and the contestants confronted Chad during The Bachelorette’s Men Tell All episode. In case you’ve been living under a rock, Chad is this season’s villain and he’s pretty much the worst baddie in Bachelor Nation history (including Courtney Robertson). So have any of the guys forgiven him for his behavior? If social media is any indicator, which these days it tells us pretty much everything we need to know, then no. None of them are friends with Chad.

I decided to go through and see if anyone is actually friends with Chad after everything that happened. It looks like however, that even the guys who weren’t around that long aren’t jumping at the chance to have a beer with him. That’s OK though, Chad doesn’t seem too concerned about people’s feelings toward him. Guys I didn’t check into because they weren’t around long enough, or just didn’t have their feuds televised include: Coley, Jake, Jonathan, Nick S., Peter, Sal, James S., Brandon, Will, Ali, Christian, Nick B. and Vinny.

Consider this your updated guide to Chad Johnson’s feuds with other contestants. There’s a lot of them, so get ready.

Chad and Alex had one of the most epic 2-on-1 dates in Bachelorette history. It was a battle of words between the two, with a friendly reminder that you should drink milk, because “it’s delicious.” The episode of course ended with JoJo sending Chad home, but these two definitely still have beef. On Jul. 8, Alex tweeted, “It's funny when people have to talk smack on everyone around them in order to remain ‘relevant’. Brah, you're not relevant. Go home.” Although he didn’t specify, it seems pretty obvious he’s talking about Chad. Not to mention they had a Twitter squabble in June as well.

We’re pretty positive Chad didn’t buy Evan a new shirt after he supposedly ripped it. He’s been pretty quiet about the whole drama since the show ended, but he did tweet at Chad in May, “I think you mean: how long you can hold in your inner psycho” in response to Chad writing, “we'll see how long a man can endure 24/7 harassment.”

Jordan was doing pretty well when it came to ignoring Chad’s internet trolling, but he couldn’t resist digging into him when he suggested that Trump pick him as his VP. “With all that new free time after getting the boot from jojo & @real_alexyq stick to patio suitcase pull-ups, bro,” Jordan wrote in June. Solid zing, Jordan.

Chase was always present for the Chad drama, but never really got involved himself. That streak continued all the way till now. He has yet to respond to any of Chad’s comments, including one from the most recent episode. “I like how @cbmcnary was a dick, realized it, & came back the next day to apologize just to help his chances at becoming #TheBachelor LOL,” Chad wrote. Chase is smart for not responding to the trolling.

We didn’t really see much drama between Wells and Chad on the show, but Wells is definitely not a Chad fan, according to social media. In June he tweeted to Jordan saying, “when this is all over, Im gonna take you out to a very nice dinner #TheChad cant come.” He has also wrote, “#TheChad being compared to Hitler and...Donald Trump really made my weekend.”

Like Chase, Luke also tended to stay out of the fighting, but that didn’t stop him from posting a quick jab about wanting Chad to leave. “Waiting on the chad circus to be over like .. These burritos are good but theyy are filling!” he wrote with a gif of himself eating. There’s no proof they haven’t gotten past their differences, but the silence between them and the fact that he hangs out with most of the guys is a major sign he's not on #TeamChad

Unfortunately, Robby Hayes is still dealing with Chad drama on Twitter as of Monday night. “If I have to watch @RobbyHHayes pretend to like women for one more second on #TheBachelorette, I'm gonna blow my head off,” Chad tweeted. Robby couldn’t resist the temptation, tweeting back, “Been waiting for you to do that #mrirrelevant.”

James Taylor has been too busy working on his music to continue any type of feud with Chad.

After going out and finding Robby’s supposed girlfriend, Chad also found a girl who claims she was still with Grant when he applied to go on the show. Responding to someone about the drama, Grant wrote: “They all need Gatorade #extrathirsty @RobbyHHayes.” I have a feeling Chad didn’t exactly get on his good side with that move.

Derek definitely had a confrontation with Chad on the show, but they haven't gotten into any social media tiffs like other people. The worst thing Chad has said about Derek on social media was a photo of them captioned, “When Jim from #TheOffice won’t stop talking smack about you to Pam. #TheBachelorette.” Not really a diss considering Jim Halpert is the best person ever.

Has anything happened between these guys since Daniel compared him to Hitler? Probably not, considering Daniel was the closest thing Chad had to a friend.

I would be pissed AF if I got kicked in the face.